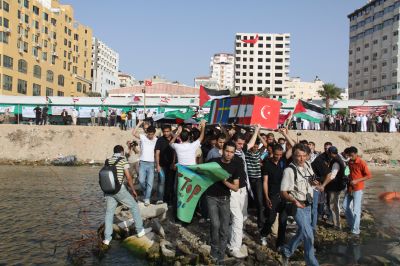 In a growing series of youth demonstrations against the Israeli assault on the Freedom Flotilla, which left many peace activists killed and injured, the Palestinian Youth Groups’ Network has continued to organize demonstrations onto Gaza streets protesting the Israeli bloody massacre against peace groups who were trying to deliver humanitarian aid and solidarity to the blockaded Gazans, after Israel has imposed its draconian siege, now in its fourth consecutive year.

Along with some International solidarity activists, hundreds of enraged Palestinian youth spilled onto streets waving the Palestinian flag and carrying an empty coffin plastered with flags of countries participating in the flotilla, in a symbolic funeral for the killed by Israeli occupation forces. 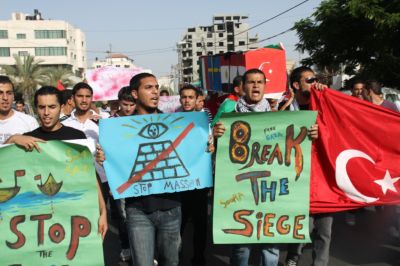 The crowd marched to Gaza’s seaport, where demonstrators centered in front of the reception set up in mourning of the killings from solidarity boats, and started chanting anti-Israeli slogans, such as “free free Gaza, free free Palestine, and sending heartfelt salutations to the Freedom Flotilla”, and demanding the international community to break the silence and take a firm stand against Israel’s atrocities against the Palestinians and international supporters as well. Amidst youthful enthusiasm, some demonstrators burned the piracy flag in reference to Israel’s hideous piratical actions against sea voyages which trying to provide support for the distressed Gazans.

Majed Abusalama, general coordinator of Palestinian Youth Groups’ Network in Gaza, delivered a speech at the reception, in which he said that what Israel did was cold-blood carnage against the people who were trying to break the unjust siege.

“We are independent Palestinian youth, away from any political party, have decided that we should uprise in rage against Israel’s crimes against our brothers onboard the flotilla,” said Abusalama. “I think it is time for all the Palestinian factions to act in concert to be one hand, because we can never be strong enough to resist the occupation unless there is a national reconciliation. We are definitely paying a heavy price for this internal dissension,” he added.

“It is shameful that the international community is watching without doing anything that would deter Israel from killing the Palestinians and anyone who is even thinking of giving support whatsoever,” said Mousheera Abushmass, project and program coordinator of PYG.

After that, demonstrators stood at the edge of the port, and some young men lowered the coffin into the water and pushed it further—a message to Israel that international convoys will never stop until the siege is permanently lifted.

“They are with us in blood and spirit, and if Israeli kills them all, a lot others will catch up, and we would still be waiting for them,” said Abusalama.