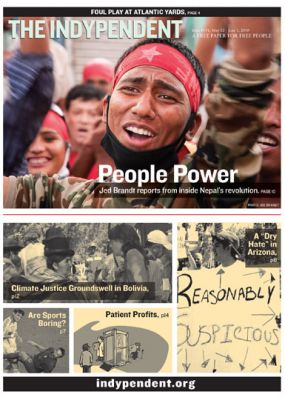 HOME SWEET HOME
Responses to “Life After Atlantic Yards: An Interview with Daniel Goldstein” May 12:

I thank you for your good fight, Daniel Goldstein. I did not consider you a sellout after taking that deal one bit because it was not the first offer. The fact that you stayed in your place for about seven years when others left long before you shows how you were willing to stand up to fight when others could not.
—Tal Barzilai

There was something I neglected to say in the interview. Develop, Don’t Destroy Brooklyn and the community that opposed the Atlantic Yards development (it was not a “small army” but a large movement) did not just oppose Ratner’s project, we advocated for the fair development of the rail yards and found a developer willing to bid for the yards and propose a version of the community plan. That developer, Extell, outbid Ratner for the MTA’s rail yards $150 million to $50 million. In its infinite wisdom, the MTA chose the low bidder. The “develop” in Develop, Don’t Destroy Brooklyn was not rhetoric. We wanted the yards developed, but with the community’s input and vision, not developed in the vision of one single developer through an undemocratic process. —Daniel Goldstein

One part of this story that imploded is obviously the disintegration of ACORN. While Daniel Goldstein criticized ACORN, I think the loss of the community organization is a great loss to the Left.
—Acorn Story

NYC TO BOLIVIA
Responses to “The Climate Justice Groundswell from Copenhagen to Cochabamba to Cancún” May 12:

New Yorkers from Youth Ministries for Peace and Justice and from Mothers on the Move were major players in Cochabamba. One person even chaired the working group on harmony with nature and ended up presenting the results of four working groups to the heads of state and in the closing ceremony. These are the positions that the Bolivian government — and others — will be moving toward Cancún. You should interview them and hear what they had to say about doing that work there.
—Diana Pei Wu

The United Nations estimates that developing countries together need $86 billion a year simply to adapt to new challenges presented by climate change. Karah Woodward’s article described how communities on the front lines of climate change are fighting back. As the leading carbon emitter, the United States has a responsibility. Climate change legislation must include funding for international adaptation. Adaptation funding will support communities in building resilience [in the face of] climate disasters. Just as the failure to cut emissions will cost us all, so will the failure to help those most vulnerable. These costs will be measured in lives lost to hunger, disasters and increased conflict.
—Isaac Evans-Frantz

SACRED BODY
Response to “Coloring the Abortion Debate” May 12:

Hats off to organizations like Desiree Flores’ Ms. Foundation for Women for keeping traditionally under-represented women in the dialogue and action on abortion issues. Women of color certainly are stakeholders in the dialogue, although it does appear, if we play the “numbers” game, that they are less involved, as women of color are having fewer abortions. However, we women of color understand the complexity of the issue and necessity for staying in the dialogue. I must say, though as a woman of color, our younger generation are having abortions for all the wrong reasons. Something has happened in the Black community that needs to be corrected. Our young women do not respect their bodies enough and the young men are not responsible or respectful enough. The Black community has to take more responsibility (and this includes the Black church) for putting an end to these unnecessary abortions. Abortion is not birth control and a woman’s body is still sacred.
—Renee M.

A MORE CRITICAL EYE
Response to “Showdown in the Himalayas” May 12:

How frustrating. For the first time that I can remember, The Indypendent actually features a compelling photo on its cover and firsthand reportage from overseas — and it is Jed Brandt’s embarrassingly uncritical lionization of Nepal’s Maoists. Nowhere in his trumpeting of “people power” and “popular insurgency” is there any acknowledgement that the rebels were accused by Amnesty International of executions, torture and rape of non-combatants, as well as forced labor and the recruitment of child soldiers. (Lest Amnesty be dismissed as a mouthpiece of imperialist propaganda, it should be pointed out that they also accused the Nepalese government of all that and worse.) I’m still waiting for The Indypendent to live up to its name and its slogan of a “free paper for free people,” instead of replicating the ethical and intellectual errors that have led to the American left’s evisceration.
—Bill Weinberg
Editor,
World War 4 Report