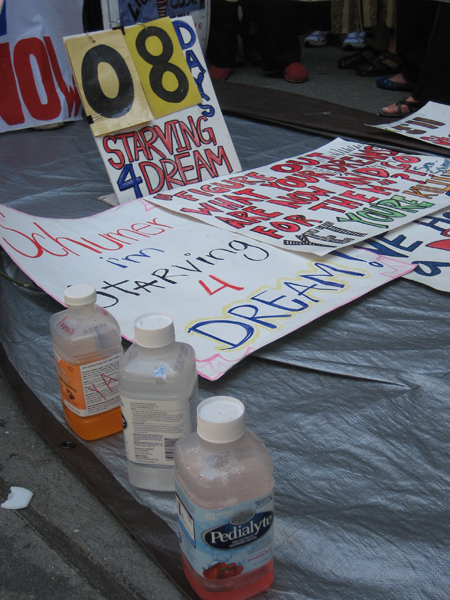 Eight days, seven nights, no food and no action from Senator Chuck Schumer on pushing the DREAM Act as a stand-alone bill in the Senate.

“For him it’s a game for his own advancement in the world of politics,” said Yadira Alvarez, a recent graduate of Columbia University and an undocumented participant in the hunger strike. “For us, its about being able to get a job and support ourselves.”

Today, Alvarez and her fellow hunger strikers demanded to meet with Schumer to discuss the bill by Thursday or they would engage in non-violent civil disobedience.

Schumer replied by sending out his community outreach coordinator, Victor Pichardo, who said the senator could likely meet with them in another ten days, on June 18. He repeatedly stressed that Schumer supports the DREAM Act as chairman of the senate’s immigration subcommittee.

But standing next to several brightly colored bottles of Pedialyte that the strikers drink to stay hydrated, Alvarez rolled her eyes. “I think that’s the thing we hate the most,” she said. “A strong supporter would be one who moves the DREAM Act forward this year by itself.”

Supporters of the DREAM Act say it could pass if Schumer focused on lining up more Republicans instead of on pushing an omnibus reform bill that is likely stir up much debate but may fail in an election year.