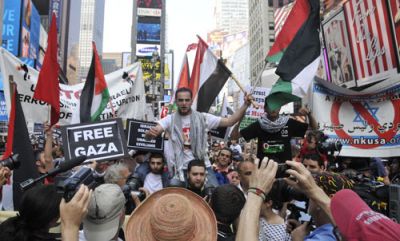 On May 30, Israeli commandos stormed an unarmed flotilla of a half-dozen ships bringing humanitarian supplies to the people of the Gaza Strip. At least nine activists are reported to have been killed and dozens more injured when Israeli troops opened fire on the passengers of one of the six ships. As The Indypendent goes to press, Israel is blaming participants in the Gaza Freedom Flotilla for what happened, while hundreds of surviving members of the flotilla remain in Israeli custody, unable to speak to the media.

In a May 31 interview with Amy Goodman, host of the daily news hour Democracy Now!, Adam Shapiro of the Free Gaza Movement described a very different picture of the Israeli raid:

Amy Goodman: Adam, can you tell us what you understand has happened?

Adam Shapiro: The Israelis launched a military operation involving about a thousand soldiers, using ships, using helicopters and using airplanes to attack the flotilla of six ships — three passenger and three cargo ships — at approximately between 8 and 9 p.m. Eastern Standard Time. All the ships have been captured. One of the ships that we know for sure, which had a satellite communication ability, the large Turkish ship with about 600 passengers including members of parliament from different countries, was attacked by Israeli soldiers using live ammunition.

AG: Israeli military reports say that when they boarded the Turkish ship, that they were attacked by sticks and knives. What do you understand has happened?

AS: Our people on the ship reported live as the soldiers came onto the ship and reported that soldiers were opening fire as they were coming onto the ship and they were descending from helicopters. So, our understanding is that the Israeli soldiers opened fire first. I have not seen or heard any thing else about — and there are many journalists on board that ship — anything else about our people, the passengers on that ship, posing any kind of threat.

AG: Adam Shapiro, what is the purpose of the Free Gaza Flotilla?

AS: The purpose of the Gaza Freedom Flotilla was to literally break the Israeli blockade that it is imposing on Gaza, a form of collective punishment of 1.5 million Palestinians who are trying to survive at this point, especially after the Israeli attacks in December 2008 to January 2009, in which much of Gaza was reduced to rubble and has not been able to be rebuilt, where Palestinians can’t get basic food and medicine in, to just survive with. And so, this effort was, yes, to deliver the goods and materials that the Palestinians in Gaza need, but also to awaken the international community to the abuse that the Palestinians are suffering.

AG: What is your response to what has happened, to the Israeli military assault on the Free Gaza Flotilla?

AS: We have always been prepared that the Israelis might attack the ships and try, obviously, try to take control of them, and prevent us from reaching Gaza, but the opening of fire against unarmed civilians who pose no threat to Israel is something, I think, it is absurd in a way that can’t even be described. We all remember what happened to Rachel Corrie in Gaza, standing in front of a home to protect it and being crushed and run over by a bulldozer driver. In this case, I think in a way, it is almost even worse because Israel said that they were sending their best commandos on this mission, that they were sending their most professional soldiers, and so if these are their professional soldiers, and they opened fire, then we must assume that they had orders to open fire. Because I don’t think that soldiers operating in this way, if they were truly professional, and they were truly the best, well-trained commandos that Israel had, they would have no reason to shoot, unless they were ordered to do so.

Israel seized the Gaza Strip in 1967 and adjusted its military occupation in 2005 when it redeployed its forces outside the territory. However, Gaza, a 139-square-mile coastal enclave that runs along the Mediterranean Sea, remains a flashpoint in the Israeli-Palestinian conflict as Israel continues to exert near total control over Gaza’s borders, its economy and its infrastructure:

JANUARY 2006: Frustrated by years of corruption and unfulfilled promises, Gaza’s 1.4 million residents oust the Western-backed Fatah party in free and fair elections in favor of Hamas, an Islamist movement respected by the local populace for providing a wide range of social services.

JUNE 2007: Intermittent fighting between Hamas and Fatah-backed security forces ends with Fatah being routed and expelled from Gaza. Israel and Egypt impose a full land, air and sea blockade that decimates Gaza’s economy. According to U.N. statistics, 70 percent of Gazans live on less than $1 a day, 75 percent rely on food aid and 60 percent have no daily access to water.

AUGUST 23, 2008: Activists in a boat carrying humanitarian aid successfully arrive in Gaza. A second ship carrying aid arrives in Gaza in October 2008. It would be the last time to date that Gaza freedom activists succeed in completing this journey.

DECEMBER 2008 – JANUARY 2009: Israel responds to the sporadic firing of homemade rockets from Gaza into the southern Israeli towns of Sderot and Beersheba with Operation Cast Lead, an overwhelming invasion of Gaza that kills 1,400 people, the majority of them civilians, and reduces much of Gaza to rubble. A boat with emergency medical supplies whose passengers include former U.S. Congresswoman Cynthia McKinney is rammed at sea by Israeli warships and forced to dock in Lebanon.

DECEMBER 2009: 1,300 members of the Gaza Freedom March gather in Cairo to try to cross Gaza’s southern border, which is controlled by Egypt, a key Middle East ally of the United States and Israel. Gaza Freedom March participants are repeatedly harassed and attacked by Egyptian security forces during their time in the country. About 80 members of the delegation, including Indypendent reporter Alex Kane, are ultimately allowed to enter Gaza.

MAY 30, 2010: At least nine Gaza Freedom Flotilla activists are killed and dozens injured when Israeli commandos storm six ships carrying humanitarian supplies to Gaza. The attack, which took place in international waters about 40 miles off the Gaza coast, sets off a wave of protests around the world.

Click here for more of The Indypendent‘s Gaza coverage.