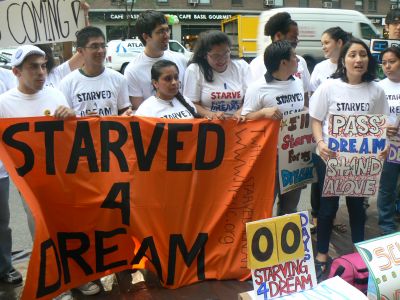 Standing on a brown tarp with bags full of blankets and pillows, a group of immigrant youth announced a hunger strike this morning in front of Sen. Charles Schumer‘s New York City office. They say they will continue their strike on the sidewalk at Third Avenue and 47th Street until he takes steps to move the DREAM Act forward. Schumer is a co-sponsor of the bill and chairman of the Senate’s Immigration Subcommittee.

The Development, Relief, and Education for Alien Minors Act — known as the DREAM Act — has been introduced every year since 2001. It would grant legal residency to youth who arrived in the United States before they turned 16, lived here for five years and enrolled in college or the military. The bill could benefit an estimated 1.5 million immigrant students who have already graduated, and others who served in the military.

Students and recent graduates — most of them undocumented — shared some of their dreams as they held a press conference. In addition to becoming legal residents, they want to become a math teacher, a computer scientist, an architect and a lawyer. Several mentioned that they wanted to be able to give back to their community. Right now, those who lack legal status are limited to working minimum-wage jobs in the shadows.