For city dwellers in summertime, movie theaters are the ultimate indoor oasis. Dark and cool, they save us from New York’s humidity, noise and crowds — and there are plenty of non-blockbuster movie venues to counter the worst effects of summer. These are highlights from their summer programming. 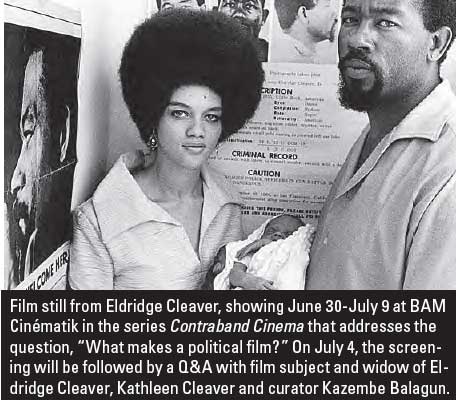 ANTHONY MANN, FILM FORUM, JUNE 25–JULY 15
and
THE COMPLETE CLINT EASTWOOD, THE FILM SOCIETY OF LINCOLN CENTER, WALTER READE THEATER, JULY 9–27
In times of change and unrest, the American cinema turns to the western. While Eastwood’s lesserknown but excellent works (Bronco Billy, Pale Rider, Breezy, White Hunter, Black Heart) show up in this series like belt buckles at an Arizona flea market, Unforgiven, Gran Torino and the films he made with Leone and Don Siegel are also accounted for. Among the makers of westerns in the 1950s, Anthony Mann stands out for his unflinching investigations of human treachery and physical pain in majestic craggy landscapes. Like Eastwood’s, his films are surprisingly political and hard-nosed. Although he is known for his work with Jimmy Stewart, his non-Stewart westerns with Victor Mature (The Last Frontier), Gary Cooper (Man of the West) and Barbara Stanwyck (The Furies) are harsh and essential.
Film Forum:
209 W. Houston St., Manhattan
filmforum.org
Film Society of Lincoln Center
Walter Reade Theater:
165 W. 65th St., Manhattan
filmlinc.com 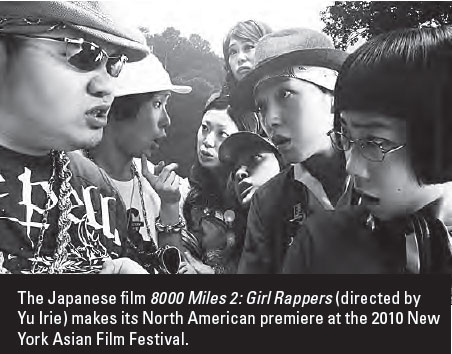 THE NEW YORK ASIAN FILM FESTIVAL, WALTER READE THEATER AND IFC CENTER, JUNE 25 – JULY 8
Subway Cinema presents its annual roundup of Asian genre madness, with four dozen movies from Hong Kong and mainland China, Japan, Korea, Indonesia and Thailand. This is that rare festival in which every film is worth seeing, its programming rivaled only by the awesomeness of its website, which provides high-octane descriptions coupled with trailers for each film. In addition to movies with titles like Mutant Girls Squad and Kung Fu Chefs, the festival features John Woo’s uncut Red Cliff and A Little Pond, director Lee Sang-Woo’s film about the 1950 massacre of 300 Korean civilians by the U.S. Army.
Film Society of Lincoln Center’s
Walter Reade Theater:
165 W. 65th St., Manhattan
filmlinc.com
IFC Center:
323 Ave. of the Americas, Manhattan
ifccenter.com
NYAFF 2010: subwaycinema.com

92Y TRIBECA continues its innovative programming all summer with a series focusing on drecky ‘90s blockbusters (Basic Instinct with Sharon Stone, Fear with Mark Wahlberg) and a screening of David Lynch’s underrated Lost Highway, curated by the website Not Coming to a Theater Near You. 92Y Tribeca’s film programming is the most forward-thinking and varied in the city right now, often featuring films programmed by the left-wing Red Channels, which picked some of the films for BAM’s Contraband Cinema series.
92Y Tribeca Film Screenings:
200 Houston St., Manhattan
92y.org

THE MUSEUM OF MODERN ART, always a haven for cinephiles, presents a full summer lineup of films by important directors of documentaries, foreign art films and Hollywood classics, including Frederick Wiseman, Lisandro Alonso, Sally Potter and Ida Lupino. The museum’s exemplary Auteurist History of Film series continues throughout the summer, featuring films from the late silent/early sound period, that transitional era when the movies achieved a rare graceful simplicity that is both hardboiled and lush.
MoMA Film:
11 W. 53rd St., Manhattan
moma.org

ROOFTOP FILMS, at locations all over town, shows movies outdoors. The highly varied and very original programming unearths new films you will have little chance to see elsewhere and is far removed from the obvious classics-style programming of the Bryant Park and Central Park pile-ups. Films include mumblecore dramas, Hollywood parodies, new documentaries, animated films, and the infamous Drunk History series of shorts based on the inebriated ramblings of the memory-clouded and half-informed. Those who can escape the city will want to check out the many drive-ins scattered upstate, a guide to which appears a driveinmovie.com/NY. There are about 20 left, and who wouldn’t want to spend a summer night in front of the big screen at the Broadalbin Ozoner? 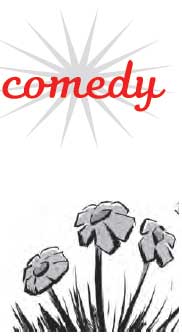 For live, anything-could-happen comedy (minus the cover charge and pricey drinks), forget Carolines, Comix and the Laugh Factory. From stand-up to improv, the city is teeming with wildly inventive up-and-comers and hidden-gem venues to discover.
—MILES KLEE

Stand-up comedy fans should make a beeline for If You Build It, a killer bimonthly show at the plush hookah bar Karma Lounge. Karma’s downstairs room is quickly becoming a hot alternative comedy venue, and with good reason: IF YOU BUILD IT regularly features New York’s rising comedy stars, from Last Comic Standing contenders to Saturday Night Live writers. No cover charge, and sweeten the deal (and your laughs) with happy-hour drink prices and all the flavored tobacco you care to enjoy.

Improvised comedy is flourishing in New York after being smuggled out of Chicago some years ago in the brain trust of quartet Ian Roberts, Amy Poehler, Matt Walsh and Matt Besser, founders of the Upright Citizens Brigade Theater (UCB) in Chelsea. UCB comedy is, literally, still underground (below a Gristede’s, to be exact), but it’s host to such legendary teams as The Stepfathers, who make up surreal and hilarious shows on the spot, as well as the cutting-edge sketch comedy of Maude Night, where future TV writers and actors cut their teeth on the hot-button issues of the day. UCB’s midweek stretch sports some well-kept secrets of improv, including the mindblowing duo 2 Square, Seize The Mustard (starring the writing staff of The Colbert Report), Conversations With Deb (uproarious conceptual autobiography), and Whiplash (free late-night stand-up hosted by veteran Leo Allen). Tickets are usually around $5, and the Pabst Blue Ribbons always a wallet-friendly $2.

Of course, UCB doesn’t have a monopoly on improv, which only gets wackier and wilder beyond Manhattan. Brooklyn Lyceum hosts a weekly Friday night event — cheekily entitled GENTRIFY BROOKLYN — featuring the cream of the guerilla-improv crop and hosted by MADCAR, a mad-scientist mashup of beloved groups M.A.D. and Sidecar. After each show, without fail, a dance party materializes. Queens has THE CREEK AND THE CAVE, a weekend hotspot that serves mean guacamole and margaritas; there you’ll find Jaws: The Musical as well as totally free improv shows by Teenage Cop and Froduce, and even an improv competition, The Arena, where audiences vote on the funniest set to determine who moves on in a months-long tournament. If you can’t leave Manhattan, see The New Deal make up a one-act play at MAGNET THEATER, or hit the East Village’s cozy UNDER ST. MARKS, where you can catch the potent one-two punch of improv favorites Sherpa and Iron Ruckus co-hosting a Saturday night show while you kick back with a tallboy.

The Creek and the Cave:
10-93 Jackson Ave., Queens
Schedule: thecreekandthecave.com

One of the most promising developments in New York City comedy these days is the explosion of storytelling- based shows. Operating left of field from straight theatrical monologues, events like RISK at 92YTRIBECA are usually organized around a theme — revenge, regret and intoxication being popular choices — that provides the writers and performers with a jumping-off point for all-too-true and funnier-than-fiction confessions. Risk features a stable of veteran performers and is spearheaded by Kevin Allison of The State, a cult-favorite ’90s sketch-comedy series. FIRESIDE STORIES is a traveling show featuring underexposed comic talent, while the more established LIARS SHOW offers an engaging twist on the signature formula: One of the night’s four speakers completely fabricates a tale, and it’s up to the audience to figure out which.