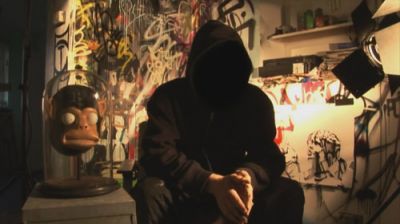 Exit Through the Gift Shop
Directed by Banksy; Released by Producers Distribution Agency

For the most part, Exit Through the Gift Shop follows Thierry Guetta, a French amateur cameraman with long sideburns that merge with his mustache from under a fedora. The owner of a vintage clothing shop in Los Angeles, Guetta is an obsessive recorder who shoots practically every moment of his life on video, collecting tape after tape, without ever watching them. A fixation with the L.A. underground channels that obsession into a close documentary relationship with the city’s most significant and illusive street artists. He soon finds himself a part of their world, where the covert act of creativity — on dangerous rooftops in the cloak of night — is equal to or greater than the art itself.

The film begins with an overview of street art, but it skips the graffiti-writing days of New York City subway tunnels during the 1970s, before the movement evolved globally into other art forms like wheatpasting, stenciling and above-ground murals. The focus is on two prominent contemporary street artists: Shepard Fairey, best known for his OBEY sticker campaign, “Hope” Obama portrait, and most recently, a May Day mural on Houston near Bowery inaugurating his show at Deitch Projects (on display until December, it’s the gallery’s last before it closes); and Banksy, whose satirical subversions include an inflatable doll resembling a hooded Guantánamo inmate conspicuously placed in Disneyland, and a defaced £1 million banknote on which the visage of Princess Diana replaces that of Queen Elizabeth II.

Banksy is the real star of Exit Through the Gift Shop, forcing Thierry out from behind the camera to become the main subject. The British artist appears as a low-lit, hooded figure, shrewdly presenting his own work while creating a caricature of street art collectors and documentarians. In any case, Banksy grasps the importance of documentation for the purpose of magnifying his impact beyond traditional geographical limits. 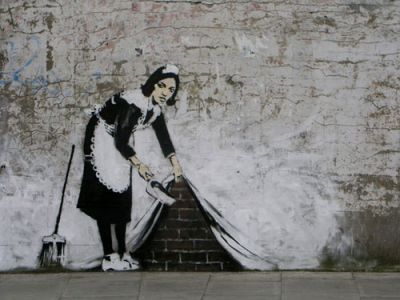 Street art is often inaccessible, found in abandoned lots behind chain-link fences, just below the cornice of buildings, or on billboards along a highway. For documentarians of the art, much of the thrill is in the challenge of finding the artwork, and it’s necessary to adopt the mindset of a street artist to locate it.

The creator of the graffiti website eyegunk.net, who we’ll call Mike, has taken more than 50,000 street-art photographs since 2004; he’s a master of deciphering the interlocking letters that are a hallmark of graffiti. Unlike Guetta, Mike conceals his identity, attracting minimal attention with his short red beard, thinly rimmed glasses and plain wool hat. Eyegunk. com aggregates street art from disparate and inaccessible spaces in a virtual exhibition, but Mike’s documentary approach emphasizes the artwork’s location. “Part of doing good street art,” he explained, “is paying attention to where it goes.”

Nor does Mike share Guetta’s obsession with documenting. He started photographing street art simply as a way to remember it; but his photos have found greater purpose on his website. “I am not just interested in documenting graffiti,” he said, “ but in replicating the sense of awe that you have when you see a piece up close in person.”

During the 1980s, graffiti in New York started to distinguish itself as an art form after artists like Keith Haring and Jean-Michel Basquiat attracted major art dealers and collectors. Many pioneers of the New York graffiti world were unable to gain Banksy’s international recognition — or have intentionally avoided it — and have since crossed over into other careers like public transportation, education, design and fashion. 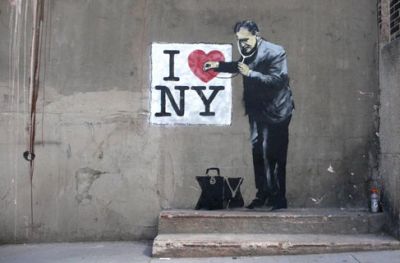 Jesee Pais, a dean at the New Design High School in the Lower East Side, brings together pioneers from the graffiti world in the Rooftop Legends Project, a mural exhibit that fuses traditional graffiti with popular urban characters and is repainted with new artwork every year by notable artists like Part, Kaves, Knows, Spot, Can2, Zephyr, Ewok and Case2, many of whom Pais knows personally from his days as a New York graffiti artist during the 1980s.

Exit Through the Gift Shop holds street artists up to a funhouse mirror: while it offers insight into their artwork, it also suggests that art could be a ruse. The film unfolds like an elaborate prank, where the boundary between fiction and reality is intentionally erased. And it resonates with street art’s anarchist spirit, reminding us that when art is condensed into a movement with rules it will undoubtedly collapse over itself.

Exit Through the Gift Shop is playing at local movie theaters. To schedule a visit to the 2010 Rooftop Legends, contact New Design High School, 212-475-4148, rooftoplegends2010.blogspot.com.