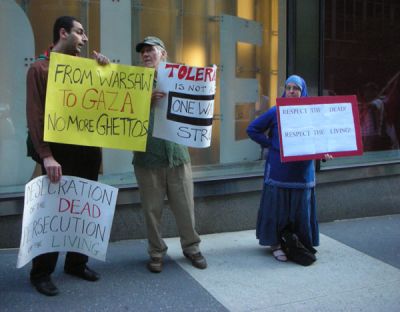 A “Tolerance Center” may seem like a strange place to stage a protest. But for a group of about 20 activists standing on 42nd Street on June 15th, the New York Tolerance Center couldn’t have been less aptly named.

The gathering outside the Center, which was holding a reading and book signing, was called to draw attention to the activity of the Los Angeles-based Simon Wiesenthal Center (SWC). The SWC Museum of Tolerance in Jerusalem is planned on the site of Mamilla (Ma’man Allah) Cemetery, although this project requires the disinterment of ancient remains.

Dennis Loh, of the Campaign to Preserve Mamilla Jerusalem Cemetery, stated, “They’ve already gotten hundreds and hundreds of bones, and we don’t know what they did with them. We’re not against the idea of a Museum of Tolerance. But why, of all the places, would you decide to build it there?”

Mamilla is a Muslim burial ground dating back to the 7th century. Companions of the Prophet Muhammad and officials from the reign of the famed Sultan Saladin (Salah al-Din) have been buried within its walls. In 1927, the cemetery was declared an historical site by the Supreme Muslim Council in Mandate Palestine.  In 1986, Israel responded to protests regarding destruction of a portion of Mamilla by stating that “no project exists for the deconsecration of the site and that on the contrary the site and its tombs are to be safeguarded.” Yet an investigation by the Israeli newspaper Haaretz in May 2010 produced new photographic evidence of the excavations which it claims “were done under a heavy cloak of secrecy over five months of round-the-clock work” from November 2008 to April 2009. The site is now labeled “Mamilla (Museum of Tolerance)” on the official website of the Israel Antiquities Authority.

Standing outside the New York Tolerance Center holding a sign and engaging with passers-by, activist Ted Auerbach stated, “I am here to protest the hypocrisy of building a Museum of Tolerance on a graveyard that has buried Muslims for over a thousand years.”  Auerbach called the project “an insult and a disgrace. The Jewish religion says very clearly that you can’t desecrate graves.  And not only of Jews, of all religions.”

“How can the Simon Wiesenthal Center claim to be a ‘human rights organization’ when it has such disregard for human dignity?” asked protester Said Shehadeh. Yet he identified the Museum of Tolerance project not as an isolated action, but a “tool of the Zionist enterprise to erase all traces of Palestinian identity from the land.” Shehadeh, a Palestinian who lived in Yafa until 2003, cited the destruction of much of Tasso Cemetery in his hometown to build a highway and commercial centers. “The issue of Mamilla parallels the 531 Palestinian towns and villages razed in the Nakba of 1948, now concealed under parks and picnic grounds.”

On February 10, a petition was filed in Geneva by the New York-based Center for Constitutional Rights and other international human rights organizations on behalf of 60 individuals from Jerusalem families with ancestors buried at Mamilla. On June 14, an addendum to the original petition was submitted to the UN Security Council, UN Secretary General Ban Ki-Moon, UNESCO, the High Commissioner for Human Rights, United Nations Special Rapporteurs and the Swiss government, based on new evidence and growing international interest. Each individual Member of the Board of the Simon Wiesenthal Center has also been directly addressed in a letter explaining the facts behind the planned project and requesting their intervention to stop the desecration of the burial site.

Most attendees of the event inside the Tolerance Center paid little attention to the picketers as they entered. The few antagonistic interactions were brief, and little substantive discussion was shared between the sides. Protester activity focused largely on distributing flyers and engaging in conversation with passing members of the public, most of whom were unfamiliar with the situation and many of whom were receptive to new information. Police, called by the Center’s security, reviewed the flyers and allowed the protesters to remain at the building’s entrance.

As the demonstration drew to a close, Loh expressed hope that this kind of grassroots work, in combination with legal efforts, will prove successful in saving Mamilla Cemetery. “It really transcends the political issue. This is a simple matter of common sense and human decency.”