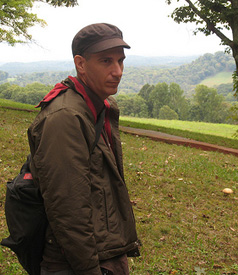 Jordan Flaherty is a journalist, an editor of Left Turn Magazine and a staffer with the Louisiana Justice Institute. He was the first writer to bring the story of the Jena Six to a national audience and audiences around the world have seen the television reports he’s produced for Al-Jazeera, TeleSur, GritTV and Democracy Now!.

Flaherty’s most recent articles have tackled a variety of important stories. His article, “Jena Sheriff Seeks Revenge for Civil Rights Protests,” follows up on the Jena Six story and exposes a wave of post-Jena Six arrests directed at activists and the black community in general. “New Complaints of Police Violence in New Orleans”  reported, “New Orleans’ black and transgender community members and advocates complain of rampant and systemic harassment and discrimination from the city’s police force, including sexual violence and arrest without cause,” and then the article provides a voice to the activists who are fighting back. “Did a White Sheriff and District Attorney Orchestrate a Race-Based Coup in a Northern Louisiana Town?” focuses on a town called Waterproof, where “the African American mayor and police chief assert that they have been forced from office and arrested as part of an illegal coup carried out by an alliance of white politicians and their followers.”

Angola 3 News: Can you please tell us about your upcoming book?

Jordan Flaherty: Floodlines is a first-hand account of community, culture and resistance in New Orleans in the years before and after Katrina. The book weaves the interconnected stories of prisoners at Angola, Mardi Gras Indians, Arab and Latino immigrants, public housing residents, gay rappers, spoken word poets, victims of police brutality, out of town volunteers and grassroots activists.

From post-Katrina evacuee camps to organizing with the family members of the Jena Six, Floodlines is the real story behind the headlines. The protagonists of this book are the people who have led the fight to save New Orleans.

A3N: What will it show readers about New Orleans and Louisiana that they won’t get from the corporate media?

JF: If this city is going to recover, the first step is getting out the truth that New Orleans is not okay. Most of the country believes either that New Orleans has been rebuilt or that, if not, it’s because people here are lazy and/or corrupt and wasted the nation’s generous assistance. But New Orleans is still a city in crisis. The oft-promised aid, whether from FEMA or various federal and private agencies, has not arrived. We don’t need charity, but we do need the federal and corporate entities responsible for the devastation of New Orleans to be held accountable for supporting its rebuilding. I want the world to know that it’s not too late to make a difference.

The other crucial element of this book is a tribute to grassroots resistance and culture in New Orleans. People like Sunni Patterson, Norris Henderson, Rosana Cruz, Sess 4-5, and the many other organizers and culture workers who have cultivated this steadfast resistance.

A3N: What is one of your favorite stories from the book?

JF: A central story I focus on is the case of the Jena Six and the people’s victory it represents. Our movements should be proud of what happened in Jena. We should claim it as a success. Fifty thousand people marched in Jena, in a mass movement led by the family members of these six kids who were facing life in prison for a school fight. These Jena families didn’t have the corporate media behind them, they didn’t have money or mainstream civil rights organizations supporting them. All of that came eventually. But for months, these families were on their own and they kept struggling and fighting for justice against incredible odds.

The massive national support these courageous families brought together helped the students. All of them remained in school rather than going to prison – and they are all now either in college or on their way. Without the world watching, the DA and judge could have done whatever they wanted.

Jena was more than a historical moment. I think that the young people from around the US – and especially the south — who traveled to Jena for the mass protests and who also organized in solidarity in their own community, will continue to lead exciting struggles. I think we will see a Jena Generation.

A3N: You have written several articles focusing on the Angola 3. How do you think the story of the Angola 3 fits into the broader picture of injustice in Louisiana?

The United States has the largest incarcerated population of any nation on earth — the people imprisoned here represent 25 percent of all prisoners around the world. Nationwide, more than seven million people are in U.S. jails, on probation or on parole and African Americans are incarcerated at nearly ten times the rate of whites. Our criminal justice system has become an insatiable machine — even when crime rates go down, the prison population keeps rising.

The state of Louisiana has the highest rate of incarceration in the United States — 816 sentenced prisoners per 100,000 state residents. By comparison, Texas places a distant second with 694 per 100,000. African Americans make up 32 percent of Louisiana’s population but they constitute 72 percent of the state’s prison population.

Prison makes us all less free — by breaking up families and communities, by dehumanizing the imprisoned both during and after, by perpetuating a cycle of poverty and by making all citizens complicit in the incarceration of their fellow human beings. Since so many New Orleanians live in prisons around the state, the stories from these prisons are also the stories of New Orleans itself. Louisiana State Penitentiary at Angola Orleans Parish Prison and all the other prisons of this state are central to the narrative of New Orleans’s poor and dispossessed.

Angola or another “lifers’ prison” is frequently the final stop on an unjust journey that begins with children born into substandard health care and housing; then shuttled into a school system that treats them like criminals from a young age; then left with few job options in a tourism-based economy in which corporations such as those that own the city’s hotels profit while the residents are left out; and finally entangled in a criminal justice system that treats them as guilty until proven innocent. This is the “cradle-to-prison pipeline,” and nowhere is it more entrenched than here in New Orleans.

Perhaps the most dramatic example of the injustice perpetrated by this system is the case the Angola Three, locked in solitary confinement because of their political beliefs.

Statements by Angola warden Burl Cain have made clear that Woodfox and Wallace are being punished for their political views. At a 2009 deposition, attorneys for Woodfox asked Cain, “Let’s just for the sake of argument assume, if you can, that he is not guilty of the murder of Brent Miller.” Cain responded, “Okay. I would still keep him in [solitary] … I still know that he is still trying to practice black Pantherism and I still would not want him walking around my prison because he would organize the young new inmates. I would have me all kind of problems, more than I could stand and I would have the blacks chasing after them…. He has to stay in a cell while he’s at Angola.”

Louisiana attorney general James “Buddy” Caldwell has said the case against the Angola Three is “personal” to him. These statements by Caldwell and Cain indicate that this kind of vigilante attitude not only pervades the DOC, but that the mindset, in fact, comes from the very top.

The problem is not limited to Louisiana State Penitentiary at Angola — similar stories can be found in prisons across the country. American Friends Service Committee reported that on any given day in the United States, up to two hundred thousand men and women are held in solitary confinement. The director of the ACLU’s National Prisoner Project, Elizabeth Alexander, told reporters, “If you look at the iconic pictures from Abu Ghraib, you can match up these photos with the same abuses at American prisons, each one of them.”

A 2008 legal petition filed by Herman Wallace echoed Alexander’s words. “If Guantanamo Bay has been a national embarrassment and symbol of the U.S. government’s relation to charges, trials and torture, then what is being done to the Angola Three … is what we are to expect if we fail to act quickly ….The government tries out its torture techniques on prisoners in the US – just far enough to see how society will react. It doesn’t take long before they unleash their techniques on society as a whole.” If we don’t stand up against this abuse now, it will only spread, he argued. The vigilante violence enacted on the streets of New Orleans after Katrina – condoned and carried out in part by the police — is one example of the truth of Wallace’s predictions.

The case of the Angola Three is truly an international issue and Herman Wallace, Albert Woodfox and Robert King are an important part of the city’s civil rights history. Among those who know this history, the Angola Three are an urgent and ongoing concern.

JF: Those who have not experienced New Orleans have missed an incredible, glorious, vital city — a place with an energy unlike anywhere else in the world, a majority African American city where resistance to white supremacy has cultivated and supported a generous, subversive and unique culture of vivid beauty. From jazz, blues and hip-hop to secondlines, Mardi Gras Indians and jazz funerals, New Orleans is a place of art and music and food and liberation.

New Orleans is a city of slave revolts and uprisings. In 1811, the largest slave uprising in U.S. history was launched just upriver, as more than five hundred armed formerly enslaved fighters marched toward New Orleans, partially inspired by the Haitian revolution. As one historian described, “The leaders [of the revolt] were intent on creating an [enslaved persons] army, capturing the city of New Orleans and seizing state power throughout the area.” Although the revolt was defeated, it inspired more over the following years.

In 1892, Homer Plessy and the Citizens Committee planned the direct action that brought the first (unsuccessful) legal challenge to the doctrine of “separate but equal” – the challenge that became the Supreme Court case of Plessy v. Ferguson. Plessy, part of a community of Creole black intellectuals and community leaders, boarded an all-white railcar after notifying the railroad company and law enforcement in advance. While the action was ultimately unsuccessful, it was an important turning point in this long history of locally led resistance to racist laws.

You could say the spirit of the Panthers was born in Louisiana. The Deacons for Defense, an armed self-defense group formed in rural central Louisiana in 1964, inspired the Panthers and other radical groups. The Deacons went on to form twenty-one chapters in rural Louisiana, Mississippi and Alabama, continuing a legacy of defiance that inspired future generations. Several civil rights workers and future revolutionaries were born in this state, including black Panther leader Geronimo Ji-Jaga, born in Morgan City and founder Huey P. Newton, born in Monroe. Jamil Abdullah Al-Amin, also known as H. Rap Brown, former chairman of the Student Nonviolent Coordinating Committee (SNCC) and later the justice minister of the black Panther Party, was from Baton Rouge. Chicago black Panther Fred Hampton’s parents were also from Louisiana.

So there is an intense and terrible history of racism and white supremacy in New Orleans, but also an incredible history of resistance and that is what I am trying to pay tribute to in Floodlines.