Text and Photo By Jaisal Noor 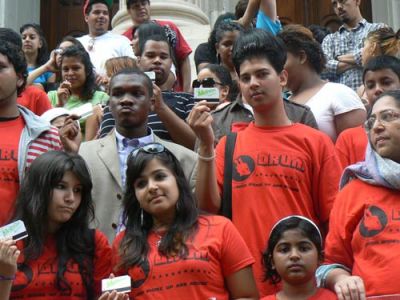 Mayank Kumar, 17, from Desis Rising Up and Moving holds up his free MetroCard. Students scored a major victory June 18 when state lawmakers agreed to continue funding free and reduced-fare MetroCards. The cash-strapped Metropolitan Transportation Authority’s plan to scrap subsidized MetroCards sparked outrage across the city in December 2009. The cuts would have affected more than 500,000 youths. Student groups representing low-income, immigrant and minority communities joined forces under the banner Urban Youth Collaborative to oppose the measure. They tirelessly lobbied state, local and MTA officials, held press conferences and spoke out at rallies, culminating on June 11 when some 1,000 students walked out of their schools in protest.

“We have to make sure this victory is not a temporary bandage over the wound,” said 16-year-old Chastity Soriano of the Urban Youth Collaborative and Make the Road New York. “We need MetroCards to be fully funded permanently.”