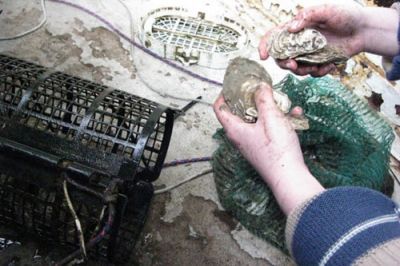 Poor George. Lonesome George, the subject of a video installation by Rachel Berwick: he’s a 90-year-old tortoise from the Galápagos Islands who, thanks to some overeager biologists, is now the last surviving member of his subspecies. That’s how it is to think about ecosystems in 2010 — you have to consider The End. For example: Tatsuo Miyajima and The Peace Shadow Project Team’s website, peaceshadow.net, allows users to submit pictures of themselves, to be turned into shadows that mimic the haunting silhouettes left in the wake of Hiroshima; the images have been used at protests for nuclear non-proliferation. It’s a compellingly doomy — and paradoxical — approach to peace activism: participants must imagine themselves as decimated, must count themselves among the future dead.

These works are part of Undercurrents: Experimental Ecosystems in Recent Art, on view at The Kitchen and several other sites along the Hudson River. The high-stakes politics of contemporary ecology are at times palpable as urgent murmurs, as in Gina Badger’s FM radio broadcast from the Little Red Lighthouse (near the George Washington Bridge), which combines the ambient audio of marine life and urban environs in a meditation on ecological colonialism and environmental violence. Lize Mogel’s didactic The Sludge Economy presents a brief history of New York City sewage. Her research shows that natural waste can be treated and put to some use; but it also evinces waste as something scary and insurmountable. Amy Balkin’s Synthesis Report, a video of the artist reading the publicly available Intergovernmental Panel on Climate Change, does not issue any polemics, it simply calls attention to this big, dense, horrifying document. Much of the show is aesthetically subtle, with a looming sense of dread acting as its driving force. 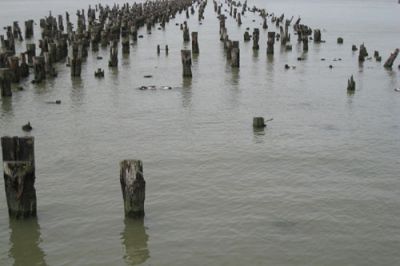 In ephemeral performance pieces, Emily Roysdon makes music at the Christopher Street Piers, calling attention to and taking part in the piers’ history as a site of queer community and anti-gentrification struggles. Pablo Helguera presents a pleasant mini-exhibition of figurative painting: the sort of earnest traditionalism the institutionalized art world generally ignores.

Andrea Polli and Sha Sha Feng’s Sound Seeker (soundseeker.org) is an interactive collection of ambient field recordings around the five boroughs, set to eventually grow into a sort of aural map of the city (Polli and Feng’s organization, the New York Society for Acoustic Ecology, is also hosting some Soundwalks: audio tours of the High Line and the North River Waste Treatment Plant). Sound Seeker is simple, really: a project that captures some of the endless snarl, the systematic convolution, even the precariously fragile character of New York City life — our life. That’s the other tricky thing about considering ecology in 2010: that we are, all of us, held in the balance.