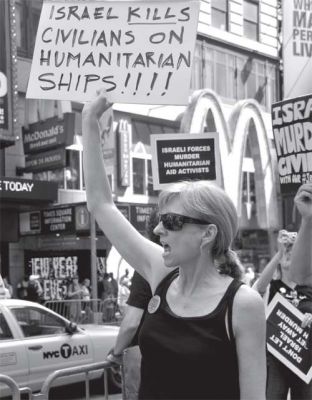 Slowly but surely, things are changing in the aftermath of the deadly Israeli raid on the Gaza “Freedom Flotilla”:  the New York Times had an article in today’s Week in Review that questioned whether Israel has become a liability for the United States; Turkey, once a reliable ally of Israel, has halted all state water and energy projects with Israel and is still threatening to cut ties with the Jewish State; and music group the Pixies became the latest to heed the call to boycott Israel and canceled a planned concert in Tel Aviv, probably in response to the flotilla massacre.

It seems, as Electronic Intifada co-founder Ali Abunimah recently wrote, that the killing of 9 activists aboard the Turkish Mavi Marmara has marked another significant turning point in how people around the world, and maybe even governments, view Israel’s actions.

This recent turning point comes about two and a half years after the “Gaza massacre” in the winter of 2008-09.  The Israeli assault on Gaza, many have observed, was a significant turning point that animated global civil society and opened up fissures within the Jewish community when it comes to perceptions of Israel.  The Goldstone report cemented those increasingly negative perceptions.

The cover story in the latest issue of the Indypendent is emblematic of this shift.

I tell the story of Debbie Mardon, her Palestinian-American husband Mahmoud Bitar, and their children. Previously, the family had been apathetic politically.  After 9/11, Debbie began watching Fox News and started to vote Republican.  But after Israel invaded Gaza, everything changed, and they all became enmeshed in the world of Palestine solidarity.

Debbie’s son Joel, 23, told the Indypendent that “it was during Gaza that we started to awaken. Killing civilians indiscriminately with U.S. weapons, paid for with our tax money, seemed to be so hideously wrong.”

There’s an important question to ask now:  how many more Debbie Mardons were created the morning of May 31, when Israel killed 9 people and injured dozens more who were part of a flotilla trying to break the crippling blockade of Gaza?  Was the flotilla attack the sequel, in terms of the effect on public opinion and action, to “Operation Cast Lead”?

The answer, it seems, is obvious:  even if most people aren’t going to become full-fledged activists on the issue of justice for Palestine, some who were shocked and angered by the latest Israeli actions certainly will be.  And for the others, even just starting to talk about Israeli occupation and colonization is a welcome step.

This is especially important in the American context.  Questioning the U.S.-Israel “special relationship” doesn’t bode well for Israel, who relies on overwhelming American military, economic and diplomatic support.  The more Americans like Debbie Mardon are created, the less likely it will be that Israel will continue to be backed unconditionally by the United States.  Washington, D.C. and the White House will be the last to change, but U.S. policy on Israel will never change unless the Obama administration (and future administrations) have the political cover and popular support to do so.

It’s not going to be easy or quick, but the era of impunity for Israel, and the beginning of an era of justice for the Palestinian people, seems in reach.