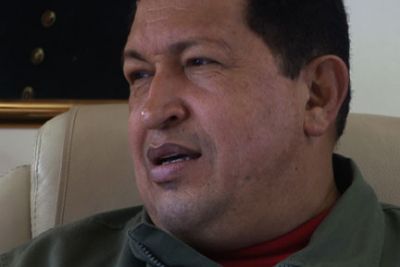 In the early 1940s, stymied by striking artists at his Hollywood studios back home, Walt Disney sallied to Latin America to collect raw material for his cartoons. Under the auspices of Roosevelt’s Good Neighbor Policy, he made a series of films used to consolidate support for U.S. political and economic interests in the region through cultural rather than military intervention. One such film, South of the Border with Disney, a romantic colonial travelogue, introduced U.S. audiences to the “colorful people,” “folk dances” and “pastoral scenes” of Latin America.

Almost 70 years later, another Hollywood imagineer by the name of Oliver Stone has traveled to Latin America and produced a film also entitled South of the Border meant to re-introduce Americans to their friends to the south. In his own way, Stone is enacting a good-neighbor policy, interviewing Venezuela’s Hugo Chavez and six other presidents in the region, but his effort will probably be as well received by Washington as striking animators were by Disney.

Over the 78 minutes of his documentary, Stone sketches a broad overview of Chavez’s “Bolivarian” revolution that seeks to expel the United States and the International Monetary Fund from the region. On top of that, Stone is trying to provide a corrective to the mainstream media’s demonization of Chavez and other left-leaning leaders in the region. In an exclusive interview, Stone said, this is a “big picture of big changes,” made by a big director against big media.

The film opens with U.S. media calling Chavez a “rogue dictator,” a “killer clown,” a “drug addict,” and “more dangerous than bin Laden.” Author Tariq Ali, who served as a scriptwriter for the film, told The Indypendent that South of the Border is trying to “correct the balance” because “there’s no shortage of the Venezuelan opposition in the Western media. It’s the equivalent of if the entire world saw the Obama administration through the eyes of the Tea Party or Fox TV. Non-stop.”

In the first part, Stone chronicles Chavez’s rise to power, then shifts to show him in action: riding a child’s bike near his impoverished childhood home, driving through streets lined with adoring supporters, taking pleasure in reading political tomes late at night (“One has to know this stuff,” says Chavez), and visiting farms and factories. Approaching one factory, Chavez jokingly tells Stone, “This is where we’re building an Iranian nuclear bomb … a corn bomb.” What is being built, with Iranian expertise and assistance, is corn products that are made available for little cost to the poor.

In a moving image, Chavez cradles a cardboard map of Latin America on his lap, explaining the history of colonialism and Western-backed tin-pot dictators who tormented the continent for centuries, and ending with a plea that the region simply be allowed “to be itself.”

This is one of many scenes in which the film tries to humanize leaders demonized by Northern powers. Now, Chavez is not above a bit of invective himself, having famously called Bush “the Devil” at the United Nations in 2006. But who is the real devil here? Bush stole an election with little mainstream media outrage while Chavez has won numerous cleanly run elections, survived a U.S.-supported coup in 2002 and managed to redistribute national wealth and dramatically reduce poverty — while being fought at every turn by an extremely hostile U.S.-funded opposition and Venezuelan press.

One might also ask, who is the real journalist here? That it takes a famous Hollywood director (one accused of presenting cartoonish views of history in his films, and thus also demonized) to correct U.S. press coverage says a good deal about the state of corporate media. Stone says this media “should have their licenses away, make it public service again, take out the profit motive.”

But the film does not give voice to the anti-Chavez perspective, to the chagrin of everyone from liberals to the far right, who demand fair and balanced coverage from Stone but not from Fox, which is the source of much of the anti-Chavez material featured in the film.

To his credit, Stone acknowledges that in 1992 Chavez, as a soldier, tried to topple President Carlos Andres Perez (whose administration killed hundreds of poor in 1989 during anti-IMF riots); that there are some human rights abuses in the country (that pale in comparison to Colombia, which gets a “free pass” in the media and is home to seven new U.S. military bases); and that Chavez can say “silly things” from time to time.

But the film does not address criticisms coming from the left, such as the fact that Venezuela is far from being socialist. Stone tosses softball questions to the baseball-loving Chavez and other leaders. Important differences between national policies are elided in favor of highlighting the regional solidarity. Seeing Stone munch on a bag of coca leaves with Morales or asking Cristina Kirchner how many shoes she owns makes the film smack of “Oliver Stone’s Excellent Adventure.” But most serious radical documentarians will not get access to seven presidents either. Stone could have done more with this material by asking tough questions — or less, by focusing on the new social movements credited with bringing about this left turn and whether or not it is indeed left.

Nonetheless, this is a picture that should be considered, not only in light of dramatic changes in Latin America, but for the alternative it provides to our own reverse-Robin Hood system. Stone observes that in Latin America “the resources belong to the people, no longer can corporations take it out of the country. The profits from oil and gas go to the people. We have the opposite idea, which is the oil belongs to these five or six gas companies, oil companies. They make the windfall profits, we don’t tax them, they can spill all the oil they want, and we don’t do anything? Isn’t Latin America ahead of us in many ways?”

For more information about South of the Border, visit the film’s website. To purchase tickets, visit Fandango.com.