Race and Radicalism in the
Union Army
Mark A. Lause
University of Illinois, 2009 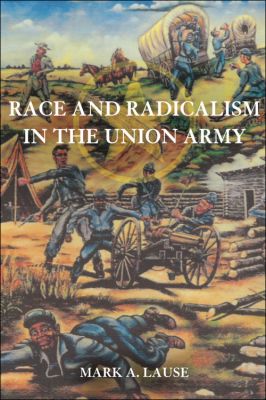 In the decades following the U.S. Civil War there was a rash of monument building. Plaques were sunk into ground still littered with shards of weaponry and human beings. Powerful officers and men who shared their names with towns were plunked down in granite. The sites of famous battles were plugged into a spatial constellation of officially sanctioned memory.

Along with these monuments, a narrative was constructed that glorified the honor of the battlefield and suggested that both sides could claim it in equal measure — the rest, details. Frederick Douglass in particular recognized that this ideology recast the Civil War as primarily a sectional rather than social conflict, and argued that equal opportunity monument building obscured the fundamental issue of the war: slavery.

But not every aspect of the war was so easily absorbed by the narrative of sectional conflict, and not every battlefield was commemorated. Honey Springs Depot in what was then Indian Territory (now Oklahoma) was the site of the region’s most significant battle, but the Union Army veterans who fought there with the District of the Frontier showed no interest in erecting a monument.

This historical silence is at the heart of Mark Lause’s Race and Radicalism in the Union Army. The District of the Frontier was a tri-racial army drawn primarily from the Cherokee, Choctaw, Chickasaw, Creek and Seminole nations, along with many escaped slaves and free black volunteers, and led by a handful of radical abolitionists, land-reform militants and socialists. Some of the officers (most of whom were white) were close associates of John Brown and rode with him in Kansas, skirmishing with pro-slavery forces prior to the war.

Lause argues the existence of such an army points to an understanding of the Civil War as a revolutionary period in which white supremacy, colonial expansion and class oppression were challenged by the oppressed themselves and their radical allies. Multiple struggles for emancipation, self-determination, and sundry visions of “free labor,” radical land reform and even socialism came together uneasily under the auspices of the Union Army in a way that “required the people themselves to mount the stage of history, write their own dialogue and direct their own actions.”

In this concise but engrossing book, Lause counters the “dewy eyed romance of ‘the Lost Cause.’” He explains that the mid-19th century United States was beset by two related problems: “clashes among … [ruling class] authorities reflected an unprecedented crisis in the coherence of the ruling elites and their institutions” at the same time that a particular “ideology of American republicanism had introduced a usually minor factor in such considerations: the aspirations of ordinary people unwilling to accept the status quo.” For Lause, these aspirations found partial but powerful expression in District of the Frontier soldiers such as William Addison Phillips.

Arriving in Antebellum Kansas as a passionate abolitionist and land reform advocate, Phillips was drawn into John Brown’s circle. Later as a colonel in the army of Gen. James A. Blunt, Phillips won large numbers of Confederate soldiers — both conscripted Indians and poor whites — away from the secessionist cause and into the Union Army. He also scorned the corruption that mired Blunt, a once-militant abolitionist who as an Union general facilitated property theft and livestock rustling from Indian nations for the benefit of a local supply company owner by the name of Alexander McDonald. Phillips ordered the Indian Home Guards under his command to practice self defense against rustlers. They did, and “blandly he informed his astonished superiors that under his orders Indians in army uniform had shot and killed white government contractors or subcontractors.”

After the war Phillips was elected to congress as a Radical Republican. He served as a legal advisor to the Cherokee nation and even married into it after the death of his first wife; with his second wife he co-authored Labor, Land, and Law: A Search for the Missing Wealth of the Working Poor.

It is Phillips — and the countless Indian and black Union veterans who faced a different sort of struggle — who best represent the revolutionary potential of the Civil War. It’s not hard to conclude, with Lause, that the uncommemorated battlefield they left was “a reflexive act of protest” on the part of “John Brown’s body of followers and the veterans they led,” a sign of their refusal to “collaborate in creating yet another park for officially constructed historical memory.”

Perhaps their vision for a more egalitarian society — in which white supremacy and colonialism are dismantled and our aim becomes the total emancipation of all labor — is a “Lost Cause” of the Civil War that is worth remembering. And perhaps we should insist that it will rise again.

A version of this review originally ran at MR Zine.