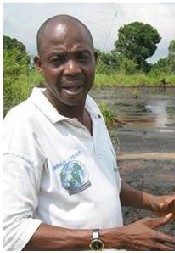 With public anger still white hot over the crippling oil spills in the Gulf of Mexico and around the globe, a Nigerian court has ordered oil giant Shell Petroleum Development Co. to pay over $100 million in “special and punitive damages” for damages in Rivers State, Nigeria, that occurred almost 40 years ago.

Justice Ibrahim Buba of the Federal High Court in Asaba, Delta State, also ordered the multinational oil giant to de-pollute and rehabilitate the dry land and swamps of the people of Ejama-Ebubu Community in Tai Eleme to its pre-impact status.

Shell’s defense that the case was too old was rejected by the Justice who countered that if it was just one nuisance in 1970, that might be a valid claim. But the spills have continued until this day making the judgment valid, he said.

Nigerian officials say that over 7,000 spills occurred between 1970 and 2000. Environmentalists believe that spills – large and small – occur at a rate of 300 a year.

In his first visit to Kenya, Brazil’s President Luis Inacio Lula da Silva this week signed six bilateral agreement to boost trade, investments and economic ties with the East African nation, including one that gives Kenyan students a university education in Brazil. 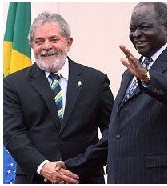 The school in the northeastern state of Ceara will train 5,000 African and 5,000 Brazilian students in various fields.

With the U.S. tied down in a war in Somalia, training troops in Uganda, Congo, Guinea, Senegal and other nations, Brazil, the world’s eighth largest economy, is chasing business deals with the East African Community economic bloc, by partnering with Kenya.

There are more than 125 million people in the five-nation East African economic.

Kenyan President Mwai Kibaki’s support for ethanol projects notwithstanding, environmentalists and local residents of Malindi, a historic Swahili settlement on the Malindi bay, are battling it out over a planned multimillion-dollar biodiesel development that will take over some 120,000 hectares of woodland to grow Jatropha Carcus.

Malindi’s county council supports the project, citing “health centers, schools, recreational facilities and employment that would will benefit this area greatly, but environmentalists say it will erode the fragile soil, take up scarce water turning forests into deserts and destroy the livelihoods of locals.

“My feeling is that we have been the victim of Afro-pessimism at the highest level,” Laurine Platzky said at a press briefing in Cape Town yesterday.

“The British media I can’t begin to understand. I think there are people who sit in different parts of the world who think that they know Africa.”

Platzky said an exit poll of foreign tourists leaving South Africa in the past few weeks suggested the World Cup had been a huge success.

Still, Patrick Bond of the Center for Civil Society in Durban, warns that after World Cup euphoria dims, immigrants may become the scapegoats for government failure to address “root causes of social stress” namely mass unemployment and housing shortages.

“We are more worried after the World Cup, the possibilities of xenophobia … construction jobs fall away and people, especially from Zimbabwe, will be looking for jobs,” said former Ireland president Mary Robinson at a press briefing in Johannesburg.

“We hope it does not happen and I hope more job opportunities come.”

Sierra Leonean writer Olufemi Terry has won this year’s Caine Prize for African Writing, for his story “Stickfighting Days” of life and death in a city rubbish dump. 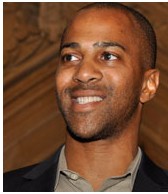 The Caine Prize of $16,000 is regarded as Africa’s leading literary award for a short story published in English by an African writer. Judges called Terry a “talent with an enormous future.”

Three of the five judges are Africans, but this is a prize decided in England, awarded in Oxford for work written in English, noted editor Ellah Wakatama Allfrey in the Guardian newspaper. “There are no stories translated from French or Arabic. And what about Shona, Twi, Hausa, Chewa, Lingala, Swahili or Afrikaans?”

Born in Sierra Leone, Terry grew up in Nigeria, the U.K, and Cote d’Ivoire before attending university in New York. Subsequently, Olufemi lived in Kenya and worked as a journalist and analyst in Somalia and Uganda. He lives in Cape Town where he is writing his first novel.

NO CLEAR WINNER IN GUINEA’S VOTE 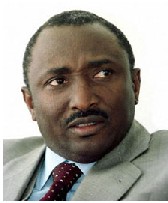 A disputed vote total sparked a rally of thousands of supporters of Guinean former premier Sidya Toure, charging electoral fraud after their candidate placed third in the June presidential poll.

The rally of mostly women numbered about 3,000. Dressed in red, they marched in front of the electoral commission and the supreme court chanting “Sidya was cheated” and “we want Sidya for the second round.”

Police dispersed the demonstrators when they tried to enter the centre of the capital Conakry.

Toure took only 15.60 percent of the June 27 first-round election, according to provisional results, making the run-off between another ex-prime minister, Cellou Dalein Diallo, who got 39.72 percent last month, and a veteran opponent of many Guinean regimes, Alpha Conde, who received 20.67 percent.

Over three million Guineans, 77 percent of registered voters, participated in the country’s first democratic election since independence from France in 1958.

Africa News Briefs are published by the Global Information Network each week.