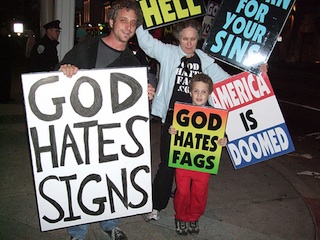 As evidenced by the rather extensive list of issues covered on this site, we follow a variety of movements and campaigns. One that we often overlook, however, is the growing trend of people counter-protesting the Westboro Baptist Church—a hate group known for picketing at public events and funerals, usually in relation to gay people, Jews and soldiers killed in battle (the latter of which they consider “God’s punishment” for the moral decay of America).

While this group deserves opposition and resistance, the typical response has been somewhat counter-productive. A distinct attitude of snarkiness and irony pervade the counter-protests, which usually consist of signs mocking the language of the Westboro Baptist Church. For instance, parodies of the sick “God hates fags” signs present at most WBC gatherings range from the sarcastic “God hates signs” to the absurd “God hates fuzzy tiny kittens.” 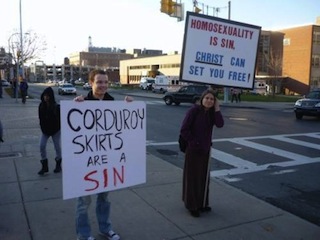 That’s not to say there isn’t power in humor. One admittedly funny photo from a counter-protest shows a WBC woman holding a sign that reads “Homosexuality is a sin”, while a young man stands next her holding a sign mocking her attire: “Corduroy skirts are a sin.” By playing on the stereotypical keen fashion sense of gay people, this comment is in its own way incisive. Yet, by also being insulting, it can only serve as a further divide between two people that ultiamtely must come together for hatred to be extinguished.

I have yet to see much effort to reach out to the WBC, perhaps because people think they are insane, irrational and unchangeable. Unfortunately, this attitude toward their fellow man/woman is something they share with the WBC. If both sides are belittling the humanity of the other as irredeemable than no progress will ever be made. Since the basic ideology of WBC is based on hate, the burden is therefore on the counter-protesters to bring the WBC folks back from the edge.

But if counter-protesters aren’t ready to make this gesture, they can at least improve the effectiveness of their campaign in other ways. Perhaps the best tactic being employed (or about to employed) is by an LGBT support group in Dallas. According to The Advocate:

Plans by the notorious Westboro Baptist Church to protest the Resource Center Dallas, a northern Texas nonprofit that offers a variety of programs to LGBT and HIV-positive people, on July 9 have been turned into a fund-raiser. The center has launched an initiative called “Hell Freezes Over” and is asking local residents to donate an amount of money for each minute the protesters plan to picket both the center and Beth El Binah, a mainstream Jewish congregation with a longtime LGBT outreach that meets at the center. The center plans to use funds raised to buy a new ice machine for its meals program, which serves lunches to HIV-positive clients every weekday.

“The protesters have been known to abandon their protests when they’re turned into a fund-raiser,” says Bret Camp, associate executive director for the center’s health and medical services. “Whether the church shows up or not, this is a way for the North Texas community to stand with us against hate and help us with a timely need.”

While this strategy doesn’t get at the root of the hatred, it does weaken WBC’s efforts. Hopefully this is a step in the right direction.