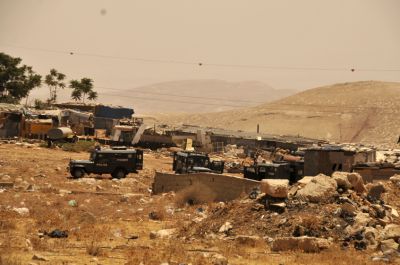 I am here as part of the summer camp organized by the Israeli Committee Against House Demolitions (ICAHD), and we are now on our second week of reconstructing a Palestinian home that has been demolished twice by the Israeli military. At the same time we received our visit, the border police also dropped by an ICAHD building site south of Hebron where a couple of dozen Spanish activists are reconstructing a home (a third group of volunteers, also from Spain, is working at a site in the Old City of Jerusalem).

In the South Hebron Hills, the Border Police surrounded the construction site and pulled aside Meir Margalit, ICAHD’s coordinator on the site, telling him they were going to interrogate him. When they left him unguarded, he simply split, and the police eventually withdrew without taking any action.

In our case, the police did not arrive at our building site, but rather to the Bedouin camp on top of the hill above Beit Arabiya, the center where the 15 or so international activists are staying. They came around 11:30 in the morning with seven jeeps, four of which went inside the Bedouin compound. The other three stayed at the entrance to the road that leads both to the Bedouin camp and to Beit Arabiya, preventing ICAHD volunteers, who came rapidly from the worksite three-quarters of a mile down the road, from going down. The police then climbed partway down the hill and on top of the Bedouin shacks. They took pictures of Beit Arabiya and told the Bedouins that they had to move two of their ramshackle structures further back from the edge of the hill. They then withdrew, some of them moving backward up the hillside with their weapons pointed down toward Beit Arabiya. 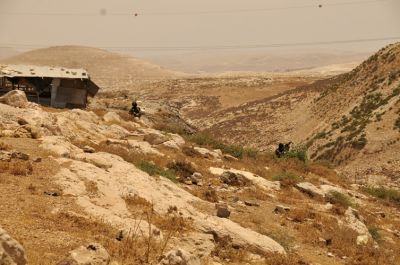 ICAHD Director Jeff Halper believes that the police were targeting Beit Arabiya, rather than the Bedouin camp. He points out that the same police branch visited the South Hebron Hills ICAHD site at the same time and also notes that “they didn’t interrogate anyone or say what they were looking for.”

The fact that they came to Beit Arabiya and not to our worksite is worrisome, says Halper. He calls Beit Arabiya, which belongs to the Shawamra family who are hosting the camp, the “flagship” of ICAHD. It was the first home demolition where Israeli activists were present to try to prevent the destruction. It has been demolished and rebuilt four times, the last time in 2003, since which time it has been under a demolition order.

The Shawamra family themselves are unable to live in the house permanently because if they moved in they would lose their Jerusalem identity cards and with it their national health insurance and other benefits of Jerusalem residency (including the right to enter the city itself).

Halper is concerned that the police were scoping out Beit Arabiya to prepare for another demolition. If they do, ICAHD will no doubt be back to rebuild.