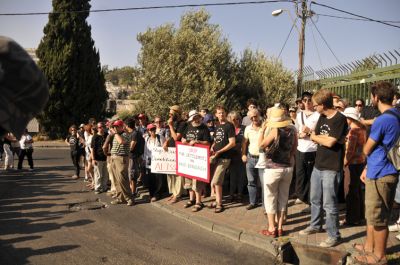 A year ago, I arrived on the West Bank to take part in the Israeli Committee Against House Demolitions’ (ICAHD) summer rebuilding camp. The day we began work on reconstructing a demolished Palestinian home, we heard about two Palestinian families— the Hanoun and Al Rawi families—being evicted from their homes in the East Jerusalem neighborhood of Sheikj Jarrah. After our first day of rebuilding, we went to a demonstration at the entrance to the neighborhood, which was guarded by Israeli police. Last Friday, I went to what has now become a weekly action in the same spot. The two houses are still occupied by Israeli settlers and five more families are under immediate threat of eviction. The entire neighborhood is being targeted by settlers for takeover (they have already filed plans with the municipality for “redevelopment”).

There’s a saying in French: Plus ça change, plus c’est la même chose—the more things change, the more they stay the same.

There are a few other things around here that haven’t changed much since I was here last. Take the illegal settlements on the West Bank. ICAHD Director Jeff Halper took participants in this year’s summer camp on what he calls the “Matrix of Control” tour last Friday. From the dusty village of Anata, with its potholed dirt roads and no sidewalks, we went to the settlement of Ma’aleh Adumim, a sprawling city of 40,000 with lush green landscaping, three municipal swimming pools, and its own Peace Library.

The area designated for the settlement’s expansion, a 4,000-acre swath known as E1, stretches all the way from Jerusalem to Ma’aleh Adumim, essentially cutting the West Bank in half. Halper explained how the Palestinian Authority is already essentially acquiescing to this bisection; they have contracted with a Japanese company to build roads from Ramallah to Jericho and back across the West Bank to Bethlehem, replacing the traditional route between the two cities, which goes through Jerusalem. The new roads are just another step the in the process of removing Jerusalem from the center of West Bank life.

Work is continuing on two sets of roads on the West Bank: When they are completed, one set will be closed to Palestinians and will serve to connect the settlements that dot the region; the other roads, complete with checkpoints, will be for Palestinian use. Many of the checkpoints are located in underpasses, so that the settlers need never know they are on occupied Palestinian land.

Residents of Ma’aleh Adumim, said Halper, are blissfully unaware that they are part of an Israeli plan to control  most of the territory of the West Bank. They move to the settlement, which is called a “neighborhood,” because they can get inexpensive housing only 10 minutes away from Jerusalem and because they want to get away from the increasingly large community of religious Jews (now about 30 percent of the city’s population).  “These people have never even heard of ‘E1,’” Halper said.

The green lawns and median strips of Ma’aleh Adumim are incongruous in this desert country. Everything has to be irrigated, since it doesn’t rain here at all during the summer months. Per capita, settlers use on average five times as much water as Palestinians, and many Palestinian villages go without water for several days each week.

From Ma’aleh Adumim, we went into the East Jerusalem to the Palestinian neighborhood of Silwan, like Sheikh Jarrah very much contested territory. Some 30,000 people live in the houses jammed into the hillside, and in the center, there is a 7-story apartment building erected by Jewish settlers. The building, like the demolished homes ICAHD works to reconstruct, was built without any permits, but Israeli authorities say they “didn’t notice” its construction.

Nearby is the Al Aqsa mosque, one of the most important mosques in the Muslim world. Underneath is an archaeological dig. Like most archaeological projects in Jerusalem, the goal is to dig down to the historical period when Jews occupied the city to bolster Zionist claims to the area. In this case, there is an added twist: Jewish settlers have been intentionally digging tunnels without reinforcing the support structure. Their hope is that the next big earthquake (and the region is overdue for one) will bring down the mosque, so that the Jewish Temple on the Mount can be reconstructed in its place.

From Silwan, we went to the Sheikh Jarrah demonstration. I had a feeling of déjà vu as I stood on the street corner I had stood on a year ago, with Israeli and international activists mingling with Palestinians. Things didn’t seem to have changed much in the intervening time. I did notice one new element, however: In the desert below Ma’aleh Adumim construction has begun on an artificial lake for a new water park. 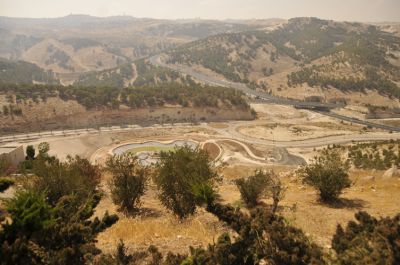