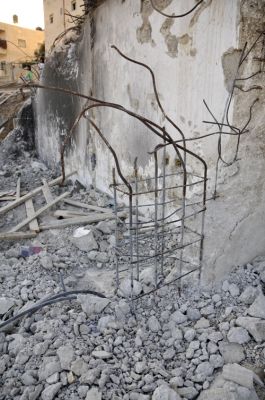 Anata, East Jerusalem, July 19, 2010—Activists from the United States, Britain, Germany and Iran have gathered here for the Israeli Committee Against House Demolitions’ (ICAHD) eighth annual summer rebuilding camp. They will spend two weeks rebuilding a Palestinian home that has been destroyed by the Israeli military.

This year’s house belongs to the Hamdan family. The structure was demolished in 2005. In 2007, ICAHD activists first began rebuilding the house, which was located near construction on a section of Israel’s apartheid wall, which snakes  through Jerusalem and the whole of the West Bank, sometimes cutting through communities or separating farmers from their lands. When local children began throwing stones at the soldiers guarding the building crews, the soldiers fired back with tear gas, and feeling endangered, the ICAHD volunteers suspended the effort for an alternative site. In 2008 the ICAHD camp came back to the Hamdan home and completed reconstruction, but the house was demolished again within a few months.

As we cleared the rubble from the foundation this morning, I noticed the tile floor that remained underneath. I was struck by the fact that the tiles were the same pattern as those we used last summer, when I participated in the ICAHD effort to rebuild a house a short distance away. I thought about the volunteers in 2007 and 2008, who had worked in the summer heat to build this home, only to have their work destroyed shortly after the family moved in. 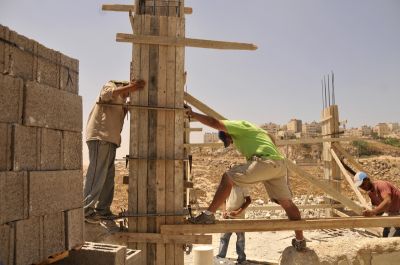 This year’s camp is smaller than usual, and much smaller than last year record 60-plus activists. Nevertheless, we made measurable progress today. After a nonviolence training session by members of the Palestine Solidarity Project based in Beit Omar near Hebron, this year’s activists took a walking tour of Anata. ICAHD Director Jeff Halper explained how part of the village is under joint Palestinian-Israeli control, and part of it is under Israeli control (known as “Area C”).  Many of the homes in the Area C section exist under a constant threat of demolition, because Israeli authorities claim they were constructed without the proper permits.

In the afternoon, the whole crew of volunteers went to the building site and got down to work, forming human chains to pass along a seemingly endless stream of buckets of concrete to be poured into molds that a smaller group had built in the morning to create pillars that will support the roof. At the end of the day we were treated to a sumptuous tray of baba ganoush, hummus, pickles, and fresh-baked bread sent out to us by the mother of two teenaged girls who had been watching our efforts

We dragged our sweaty bodies home for dinner and a presentation from Jeff and Salim about the Israeli occupation and the history of Beit Arabeia, the house where we are staying. Our host Salim Shawamra explained the nightmarish and expensive process he repeatedly undertook in unsuccessfully trying to get a permit to construct the house, named after our hostess, Arabeia Shawamra. This house has been demolished and reconstructed four times, the last time 2003, and there is currently a demolition order pending against it. Now it is used as a peace center, and the Shawamra family only stays here during the ICAHD summer camp, because they fear that if they lived here fulltime, they would lose their Jerusalem residency permits, and if the place is demolished again, they would be left with no place to live. 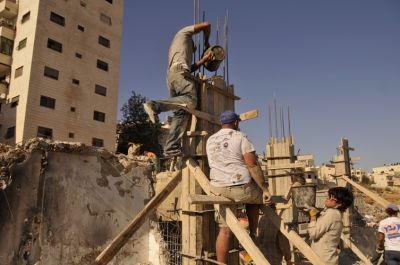 Salim related how his applications for a building permit were repeatedly denied, first because his land allegedly lay outside the village’s planning zone, and then because the land was designated for “agricultural use.” “Look at this land,” he said. “It’s dry and rocky. No one has farmed here since Adam’s time.”

For Palestinians to own land that they are not allowed to live on, he said, is like “someone giving you a Big Mac and then telling you you can’t eat it. What is it good for? The smell?” His family’s situation is farm from unique. The process to obtain a building permit on Israeli-administered land is Kafkaesque, and it is almost impossible for Palestinians to get permission to construct anything. Structures built without permits are routinely demolished by the Israeli military. More than 25,000 homes have been destroyed since the Israeli occupation began in 1967. 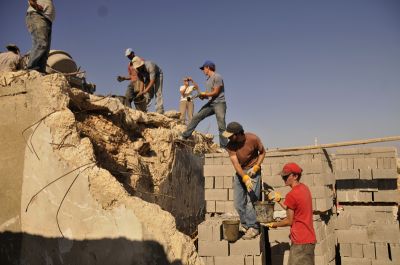 ICAHD and its volunteers have rebuilt 162 of these, 95 percent of which are still standing. This may seem like a drop in the bucket of what needs to be done, but the actual construction, while important, is not the main point of ICAHD’s work.  The organization explicitly works to resist the demolitions and educate participants about the situation in the Occupied Terriotories as well as inside Israel in the hopes that they will remain active in Palestinian support work. Speakers come to the camp every night to discuss various aspects of the struggle against the occupation and the international boycott, divestment and sanctions campaign that has been gathering momentum since Palestinian civil society groups issued the call for it in 2005.

Most camp participants are already involved in this work, but they come home from their experiences here energized and more determined to carry on their efforts. As Alaina Melville, a volunteer from Portland, Ore., put it, “As Americans, there’s only so much we can do here, but there’s a lot we can do back there, because our tax dollars funding this whole thing.”