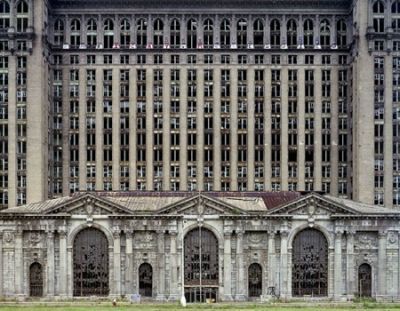 IN THIS ESSAY:
The Ruins of Detroit
By Yves Marchand and
Romain Meffre Steidlville, 2010

Sword of My Mouth
By Jim Munroe (story)
and Shannon Gerard (art)
IDW, 2010

Detroit is a place that demands experience, not observation.

The powerful forces that converged there — the state, industry, and unions; of capital and labor — give it near-mythical status in the American imagination. Today the boarded-up storefronts and trees sprouting from crumbling factory floors are what remain of that clash.

I went there recently for the U.S. Social Forum. Arriving before dawn, I rode past impenetrable complexes surrounded by wire and lights, coming off those glorious smooth interstates onto pitted pavement whose lane-stripes have long faded away.

Such profound dilapidation appears in sharp focus in The Ruins of Detroit, by Yves Marchand and Romain Meffre: the molting ceiling of an opera house, or a former mansion surrounded by vacant lots, its red stone façade drooping like the face of a Bassett hound. It’s the pair’s first book together, but their collaboration began nine years ago, photographing abandoned buildings around Paris. Marchand and Meffre told me they photograph ruins in part as a way to preserve history, and in part because, as any kid will tell you, it’s exciting to break into old buildings. There’s a romanticism to their work — evident in the saturated jewel tones, peeling layers, unexpected views and angles. Mystical and intoxicating, these scenes look as if the person in that room had only just stepped out — and in their absence, the roof caved in. Chairs lie overturned on the floor as light streams in through weather- made skylights over the exquisite-looking detritus scattered below. The accompanying text, in contrast, presents a straightforward, even clinical, analysis without the elegiac tone Americans often adopt when conjuring the ghosts of industries past. 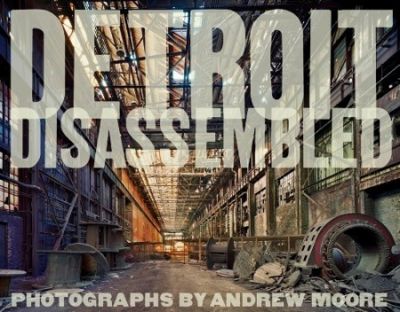 Andrew Moore’s Detroit Disassembled takes a gentler approach. Moore, best known for his large-format portrayals of the architecture of Cuba and the former USSR, also betrays a fondness for decayed grandeur. His deftly curated work shows us not just abandonment, but what happens afterward. One photo shows a factory floor covered with a carpet of green mold. Another shows birch saplings growing on what was once a library. We also see people — on street corners and in the doorways of these supposedly abandoned houses. Where Marchand and Meffre freeze-frame at a specific state of decay, Moore pushes onward.

Several buildings appear in both works, like the Packard Motors plant. Unused since 1958, it’s a long, quiet rectangle covered with orderly windows. Midway, the roof and frame cascade down to the second floor like a toppled stack of papers. In the 1990s the site, expansive and unattended, was a favored party spot; now it’s slated for demolition, like many of the buildings here, and tour buses stop by on occasion.

Ruins are incredibly seductive, and both books are visually stunning. Their grandiosity is so out of scale with any experience you could have in Detroit today that the photos feels like abstractions.

Jim Munroe’s graphic novel Sword of My Mouth imagines a bleak future: the Rapture has happened, and we see the not-sochosen of Detroit try to make lives amid the remains of society. In this world, angels roam the skies, the interstates are offlimits and magic works. Its harsh environment contrasts with Shannon Gerard’s line drawings that give a warm feeling to the narrative and draw the reader in to what becomes a story of human relationship, focused on one group of urban farmers. 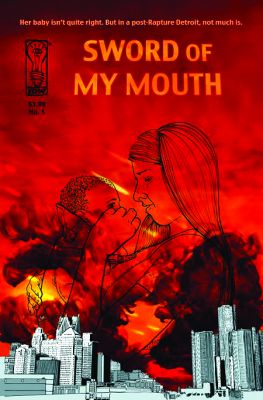 Sword of My Mouth looks at the world through the lens of fantasy, but it feels familiar. Characters garden vacant lots to feed themselves and sell the rest at Eastern Market; kids band together and look out for each other; single moms raise children with the help of friends and relatives.

None of these books adequately convey what it’s like to be in Detroit now, with its far-flung concrete, scatterings of people and vast, vacant spaces. Munroe comes close, but errs on the side of optimism.

It’s impossible to ascribe a single narrative to the city. But it may be a useful way to think, as did many of us at the USSF, of what we’d do if all the structures of the government fell away — as in Detroit, most already have.

The numbers are dire: nearly 30 percent unemployment; 66,000 vacant lots, a 24 percent rental vacancy rate. The news depicts a ghost town, irrelevant since the late ’60s — an image that art projects tend to reinforce, but that belies the facts on the ground. Native Detroiters, by and large, aren’t concerned with making themselves a place on the world cultural map, but with making do.

One lane of every road goes to parking and bicyclists, so generous is the asphalt in this city. The city holds nearly 900 farms and gardens, many of which now educate and train aspiring gardeners. Smallville Farms, which I visited, is built on two city lots and, under the supervision of a full-time manager, employs the volunteer services of gardeners from around the city, an architect,and the kids on the block. A vacant house nearby serves as a storage shed. Apart from gardening equipment inside, there was little of value in the house. The metal had long been scavenged for sale, as happens to most abandoned buildings here.

The rich social ecosystem here, mostly decoupled from the government, contradicts our notions of what “urban decay” looks like, just as much as it challenges what we think a progressive movement should look like. “Back to the land” wouldn’t have been my first thought. This looks much more like a new world in the shell of the old than like the triumph of the proletariat.

In some ways, you can see 1980s New York inside today’s Detroit — the white flight, crime, vacant land and decrepit buildings are all here, albeit at much higher levels. Even the art scene hasn’t bypassed Detroit. Two decades ago, the local artist Tyree Guyton started converting abandoned houses on Heidelberg Street into art installations, and now the Heidelberg Project is a nonprofit organization with international renown. More recently, street artist Banksy drew a young boy on a solitary wall there — “I remember when this was trees,” it read. The piece was promptly cut out of its wall and moved to a gallery.

Grace Lee Boggs, who celebrated her 95th birthday at the Social Forum, has lived and worked in Detroit for over five decades, and garners tremendous respect from the youth she works with and from activists nationwide. It’s an inspiration to be reminded that there have always been people concerned with building for the future — yet a cursory glance over Detroit’s scarred surface reveals no obvious social progress. Though gatherings like the USSF may show us what could be, we have yet to realize change. The left here resembles the city itself — a space waiting to be claimed.