TORONTO — The anti-G20 protests this past Saturday were portrayed in the mainstream media here and in the United States as “violent.” The same burning police car and shattered storefronts were shown over and over again. But, actually being there was an entirely different story. 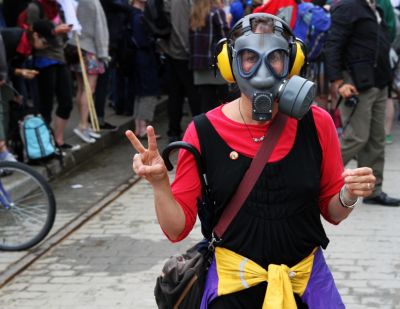 The protesters were almost entirely peaceful in the face of police intimidation. From the beginning police donned gas masks and pointed gas cannons at crowds whose reaction was to drum, dance and shout: “This is a peaceful protest.” About 200 people used Black Bloc tactics to smash in windows of closed banks and corporate coffee shops and clothing stores widely known for human rights abuses, and may have set fire to a few abandoned police cars. As can be expected there has been a lot of talk about police provocateurs and planted police cars. It has been proven that undercover police have acted like Black Bloc protesters at other summits, but there is no hard evidence right now to substantiate the claim in this case.

What is clear is that the media used the actions of a small minority to create a completely distorted picture of the protests, which served to justify the billion plus dollars Canada spent on the summit (the majority of it on security) and to legitimatize the G20 meeting.

What is also becoming clear is that police could have easily prevented this destruction, but were ordered not to. As Ryerson University professor and long-time Toronto activist Judy Rebick wrote in an article for rabble.ca:  “the cops could have arrested the Black Bloc right at the beginning of the action but they abandoned their police cars and allowed them to burn, not even calling the fire department until the media had lots of time to photograph them.”

Not only did police play politics instead of protecting people, they used the isolated Black Bloc incident to collectively punish everyone on the streets of Toronto. Police tear gassed people in the designated safe protest zone of Queen’s park and arrested over 900 people over the course of the weekend, including several journalists and a couple of monitors for the Canadian Civil Liberties Association. Many of the detainees were denied phone calls to lawyers, and police  reportedly harassed and verbally abused detained members of the LGBT community. The worst incident of police abuse of power occurred Sunday late afternoon when police blocked off a section of Queen Street in the pouring rain for several hours and refused passage to everyone – not just peaceful protesters, but journalists and people just passing through. The only way out of the police blockade was to allow oneself to be arrested. 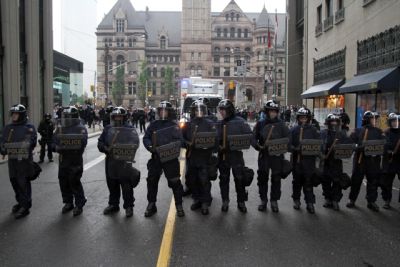 Fortunately for me, since clearly my press pass (from Toronto’s NOW Magazine) would not have prevented my arrest, I was elsewhere in the city when these events transpired. I spent a good part of Sunday in a critical mass bike ride as part of the overall anti-G20 protest. The cyclist-activist gathering of about 300 people rode peacefully through the city, gathering cheers from many onlookers. Not surprisingly, this demonstration of peaceful assembly garnered very little mainstream media attention. The ride finished in front of the makeshift jail for protesters (a film studio) as a show of solidarity for the detainees. Police slowly released one person at a time. Police negotiated with the crowd like they were the ones holding the hostages, asking protesters to step one house back in exchange for each person they released, and in a telling moment the head negotiator referred to the citizens inside the jail as “your people.” For the most part the crowd refused the trade-off and the police continued to slowly release detainees.

On Monday a rally of around a thousand gathered outside Toronto police headquarters to protest police tactics. Toronto’s leading activists spoke at the rally, including Shock Doctrine author Naomi Klein who accused the police of using the billion plus dollars, which far exceeded the cost of past G20 summits, for extra vacations and to purchase high-tech weapons (like the infamous LRAD or sound canon used on protesters at last year’s G20 summit in Pittsburg), and then allowing the city to burn in order to justify the cost. “Don’t play public relations, do your goddamn job!” Klein said at the rally.

So far police have only defended their actions, as has the mayor, the Ontario Premier and Prime Minister and G20 host Stephen Harper, refusing calls for a public inquiry into police actions. Police have only offered an internal review of what happened.

This Thursday a rally is planned outside the Ontario Legislature in Queen’s Park to demand a public inquiry. It’s also Canada Day (Canada’s anniversary as a nation-state). I can’t think of a better way to celebrate a supposedly democratic nation’s birthday than by demanding police be accountable to protect us, the people of this country.

Jacob Scheier is a regular contributor to Toronto’s NOW Magazine and The Indypendent.