As Israeli Prime Minister Benjamin Netanyahu prepares for a “kiss and make up” session at the White House tomorrow, Israel’s Ministry of Foreign Affairs announced a new list of items that will be banned from entering the Gaza Strip. The decision comes after weeks of international pressure following the Israeli raid on a Gaza aid flotilla, and seems to be meant to appease the Obama administration. 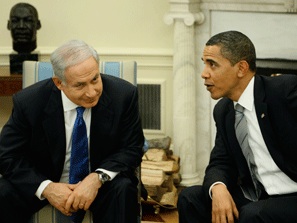 But the new policy amounts to nothing more than window-dressing, and will do little for the people of Gaza. Minus some cosmetic changes, the blockade policy of “economically strangling” Gaza stays the same.

The new list continues a policy that prohibits the entry of the private delivery of construction materials for the rebuilding of homes and infrastructure sustained during the 2008-09 Israeli assault. It will only allow in materials meant for projects “authorized by the PA and implemented and monitored by the international community”—certainly not enough to repair the “three quarters of…damaged buildings and infrastructure” that remains that way in Gaza due to the Israeli invasion, according to a recent U.N. report.

The naval blockade will continue in the form it has since the beginning of the siege, a policy that continues to put Palestinian fishermen, devastated by Israeli restrictions on how far they can go out to fish, in danger of being shot by the Israeli Navy.

Exports continue to be banned because they are a “last means of influencing Hamas,” according to a report in the Jerusalem Post.

The people of Gaza will continue to have to deal with Israeli and Egyptian restrictions on their movement in and out of Gaza that keeps most of them locked up in their prison.

A statement by Oxfam International “welcomed” the Israeli announcement, but noted that what Palestinians need most is the right to trade with the outside world, to import construction materials and for Gazans to be allowed to enter and exit as they please.

So, what has changed? Israel is letting in more consumer goods as part of their effort to “liberalize” the siege. But Nicole Johnson of Al Jazeera English reports that goods flooding Gaza over the border could amount to more “strangulation” of Gaza’s economy:

While a few more products have entered Gaza since Israel killed nine people on board the Gaza-bound aid ship, the Mavi Mamara, raw materials for businesses have not.

And in some respects the blockade on business is getting worse.

Now Gaza’s manufacturers have to compete with Israeli products.

And Israel’s goods are cheaper and better quality because they are not produced under siege.

[…]
It seems like a cruel joke. Israel attempts to assuage the international community by “easing” the siege.

So it allows Israeli goods to be sold inside Gaza; while blockading goods made in Gaza.

This is one more step in killing an economy.

The bigger picture here is that Israel is attempting to both continue “strangling” Gaza and calm the international uproar over Gaza’s suffering. Israel is putting the spotlight on their new policy of letting some more consumer goods into Gaza—which looks better to the world, as opposed to banning coriander and chocolate—while at the same time denying Gazans freedom, self-determination and the right to live as they please. The banning of toys and musical instruments from Gaza was egregious, but the fundamental problem with the blockade can’t be reduced to foodstuffs or consumer items.

If the flotilla massacre forced Israel to cosmetically change their blockade but not abandon it, then it looks like more flotillas are needed.

This article originally appeared on Mondoweiss.