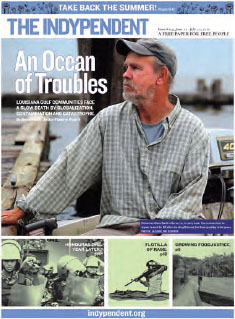 BP DISASTER
Response to “The Gulf Disaster: No End in Sight,” June 2:

Is this mess not important enough for our leaders along with our president to give it top priority? What is wrong with the people in Washington, D.C.? The people that this is hurting need nationwide support to put all the pressure on our leaders to fix this mess! This is so bad, it makes no sense what so ever. Our president goes about his every day schedule as all others like this is nothing.
—Mark Primus

FUTURE OF PUBLIC HOUSING
Response to “Out on the Streets: Understanding the Section 8 Housing Crisis,” June 2:
It’s a shame that no system is in place. The tough economic time is not an excuse to ignore the most needy in our city. If not addressed, it can deeply affect the quality of life for all New Yorkers.
— Kathy

PEACE & VICTIMHOOD
Responses to “The Victim That Is Israel,” June 2:
I am far from being a Zionist; however if we accept the idea that Israel has a right to peacefully exist, then it is up to Hamas and the other Arabs to stop attacking it, threatening to attack it, sending terrorists to attack it, etc. Perhaps if the Israelis had no discernible security concerns, they would be able to do what they say they want to do; i.e., live in peace. The Arab/Muslim world, however, does not seem to want to live in peace, and the so-called “moderate” Muslims seem
to be out voiced by the lunatic fringe. Where are the Islamic peace activists?
— Larry

Thank you, Mr. Gupta, for your careful, patient, persistent documentation of the absurd falsifications and fascist ideological propaganda vomited into the abyss (i.e. the ‘public mind’) by most of the mainstream corporate capitalist ‘news’ sources. Please keep up the courageous work.
— Astudillo