Do you hear yourself?

“No or very few valley fills that are going to be able to meet standards like this.”

Blaring the EPA administrator’s own words from last April’s press conference with her intent to end mountaintop removal mining valley fills on an amplified soundtrack, five sit-in protesters are currently occupying the lobby of the EPA’s headquarters in Washington, DC.

According to the Rainforest Action Network:

After entering the EPA building, activists sat down in the center of the lobby, locked themselves together with metal ‘lock boxes,’ and began to blast West Virginia’s adopted state song, John Denver’s ‘Take me Home, Country Roads,’ with intermittent sounds of Appalachia’s mountains being blown apart by MTR explosives spliced into the song. An additional activist has climbed to the top of the EPA front door on Constitution Ave and is standing with a banner reading: ‘Blowing up mountains for coal contaminates Appalachia’s water, Stop MTR. 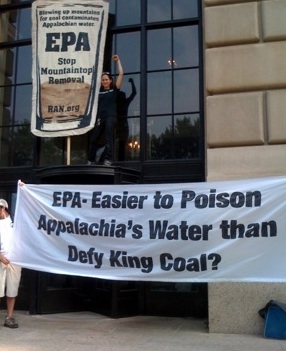 Despite Jackson’s promise last April to enforce new guidance rules to end the reckless process of mountaintop removal mining, the EPA stunned coalfield residents and human rights and environmental advocates across the nation last week with the announcement of their green light for a new mountaintop removal permit at Pine Creek in West Virginia.

“We’re sitting down inside the EPA to demand the EPA stand up to protect Appalachia’s precious drinking water, historic mountains and public health from the devastation of mountaintop removal,” said Scott Parkin of Rainforest Action Network, who participated in the sit-in. “At issue here is not whether mountaintop removal mining is bad for the environment or human health, because we know it is and the EPA has said it is. At issue is whether President Obama’s EPA will do something about it. So far, it seems it is easier to poison Appalachia’s drinking water than to defy King Coal.”

More updates on the sit-in will be posted later today. Here are some photos.