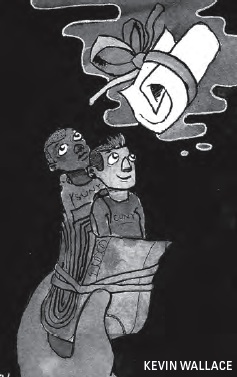 Students at New York’s public universities could face steady tuition increases for years to come depending on the outcome of a high-stakes budget battle in Albany. State legislators have closed most of this year’s projected $9 billion deficit but Gov. David Paterson continues to insist that he will not sign off on a budget deal unless the Legislature agrees to a non-budget measure that would dramatically alter how tuition is set at the City University of New York (CUNY) and State University of New York (SUNY) systems.

Under the Public Higher Education Empowerment and Innovation Act (PHEEIA) originally proposed by Gov. Paterson, control over future tuition increases would shift from the State Legislature to the Boards of Trustees at CUNY and SUNY. The trustees would be allowed to hike tuition annually by as much as much as two and a half times a rolling five-year average inflation rate for higher education, or about 9 percent per year. At that rate, annual tuition for a full-time CUNY senior college student could increase from the current level of $4,600 per year to more than $7,000 per year by 2015 and almost $11,000 per year within a decade. Tuition at SUNY senior colleges, which is currently $4,970 per year, would also skyrocket.

The Public Higher Education Empowerment and Innovation Act would also enable CUNY and SUNY to establish higher tuitions for certain academic majors such as engineering and some of the hard sciences, which have a greater cost structure. The CUNY and SUNY systems have a combined enrollment of more than 720,000, including 260,000 CUNY students enrolled at 23 institutions throughout the five boroughs, including 11 senior colleges and six community colleges.

“The one immediate effect of this measure, if not its intent, would be to segregate academic fields by race and class,” said Barbara Bowen, president of the Professional Staff Congress, the union that represents CUNY’s faculty and professional staff. “Richer students would be free to select any academic field while poorer students would be channeled into less expensive majors.”

The chancellors of CUNY and SUNY both back PHEEIA, saying it would help revitalize public higher education in New York by providing a steady, guaranteed source of revenue that would no longer be subject to the whims of elected officials. This, they add, would then make it easier to solicit large donations from private sources. According to The New York Times, one potential donor, hedge fund billionaire James Simons, has indicated he would give as much as $150 million to SUNY-Stony Brook, but only if some version of PHEEIA is approved.

The State Assembly strongly opposes PHEEIA. Meanwhile, the State Senate, which the Democrats control by a one-vote margin, has been deadlocked for weeks by the Republican minority, which routinely votes against any version of the budget, and senators William Stachowski (D-Buffalo) and Brian Foley (D-Long Island) who have refused to allow the final passage of the state budget until the Legislature signs onto PHEEIA.

The Senate leadership recently crafted another version of PHEEIA, which Paterson has signaled he is in broad agreement with. It would allow the State University’s four premiere schools in Albany, Binghamton, Buffalo and Stony Brook to increase tuition by as much 7 percent per year while capping annual tuition increases to 4 percent at other SUNY schools. Passage of a modified PHEEIA could set the stage for a future push to allow CUNY’s top schools — City College, Brooklyn College, Queens College, Hunter College and Baruch College — to also charge differential tuition.

Assemblywoman Deborah Glick (D-Manhattan), Chair of the Assembly’s Higher Education Committee, told The Indypendent that the Senate’s revised version of PHEE IA did not have the Assembly’s support. Glick, a CUNY graduate, expressed concern that yearly increases in tuition would not be matched by extra funding for the state’s Tuition Assistance Program and would leave poor students without enough aid to pay for the new tuition. She also said that there was no guarantee that the additional revenues generated through tuition increases would not be offset by future reductions in state funding for CUNY and SUNY.

“We need to maintain the public [higher education] system as an affordable and accessible system,” Glick said.