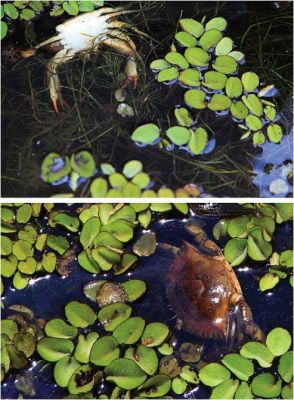 In mid-July we visited the town of Barataria, located about an hour’s drive south of New Orleans. The community of fishermen is swimming in oil. Within minutes of arriving, our eyes start to burn and we begin to feel dizzy from airborne chemicals from the oil and dispersant.

Like most of the rest of the Louisiana estuary, the further south one drives the more one enters a culture that revolves around the water. Moss-laden oak trees, some more than four feet in diameter, line the road in places before giving way to canals, bayous and swamps that lap against the pavement. We went to Barataria to meet with Tracy Kuhns, the executive director of Louisiana Bayoukeeper, a group that works with local communities to try to sustainably manage the bayous. Tracy, who is also a member of the Louisiana Shrimp Association, immediately starts talking about the chemical dispersants BP is spraying on the oil.

Tracy mentions Corexit 9500 and Corexit 9527, both of which BP is using (more than 1.8 million gallons and counting) to disperse crude oil on the surface of the Gulf of Mexico and 5,000 feet underwater where the volcano of oil from the ruptured wellhead gushes poison into the Gulf.

“Just days ago Barataria Bay was full of oil,” Tracy says while sweeping her arm toward the large — now toxic — bay to the south. “Then they hit it with dispersants and the oil goes to the bottom. But then during the day, it heats up and the oil bubbles up to the surface.”

Tracy, like many other shrimpers, calls this the “lava lamp” effect.

“The oil, after they hit it with dispersants, moves around beneath the surface and they can’t track it,” she continues, “They are using dispersants so they can minimize their liability.” Tracy tells us of the 44 exemptions the government has issued to BP for use of dispersant.

She shows us video of whitish foam lining the marshes and an emulsified paste floating on water. As we talk, Tracy repeatedly complains of a persistent headache, nausea and often feeling “out of it.”

The dispersants can be absorbed by breathing or ingesting them, and skin and eye contact. Exposure can cause a litany of harsh effects including headaches, nausea, vomiting, diarrhea, abdominal pains, dizziness, difficulty breathing, neurotoxicity, and respiratory system, genetic and cardiovascular damage.

Barely two hours after our arrival I pull Erika aside and tell her my eyes are burning and I feel dizzy. “So are mine, and so do I,” she says. “And my skin burns. Look at this,” turning her head to show a light-red rash on her cheek. Pressure pulses against my forehead. I’m shocked by how quickly both of us are exhibiting symptoms of chemical exposure.

Tracy says most fishermen are now working for BP laying out boom. “If you’re not doing this clean-up work, you’re not working,” she says, “They feel like they are helping by doing clean-up work, and they can’t stand to just sit here and not do something to help. They feel helpless sitting at home, and that’s when the depression, suicide and drinking kick in.”

As we continue to talk, our eyes burn even more, and the pulsing headache and dizziness increase. On this trip every shrimper we talk to tells us they are suffering from some or even most of the symptoms of exposure.

“Bad air moves in off the bay any time the wind is from the south or southeast,” Tracy adds. “And we’re trying to get BP to have air monitors on the boats of the fishermen who are helping clean up, but they won’t do it.”

Tracy’s passion for the Gulf and its marine ecosystems is evident. “Ninety percent of the species in the Gulf of Mexico spend some part of their lives in the Louisiana estuaries,” she says. “BP is killing our hope of getting these restocked for the future.”

Her concerns mirror those of Paul Orr. 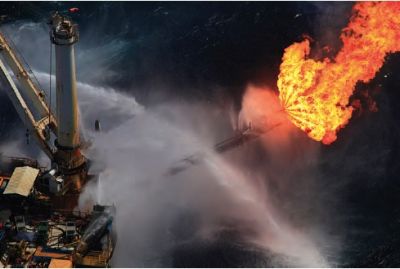 “This is the second most important delta in the Western Hemisphere, and one of the most important deltas on the planet,” Paul says. “We just have no idea what this amount of oil in this close proximity to the delta could do. The decision was made to use the dispersants intensively to sink the oil — the rationale to minimize shore impacts at all costs. But now it seems like the real reason they’ve been doing that is to get the oil to disappear because if it was staying on the surface, at least you could collect it, even if it starts impacting the shore in some way. But now we have an unknown millions of barrels of oil floating around in the water column and sticking to the sea floor. We may not ever know some of the long-term damages.”

Working with eco-activists and fisherfolk in all five Gulf states, Tracy says the BP catastrophe has allowed these groups to overcome their usual differences. “This transcends all other issues because everyone must breathe this air. We are all connected by this water. And now we’re all connected by BP ’s oil. We all know what’s going on. What planet do they live on in Washington, D.C.? Not this one. They need to come here and breathe this shit every day, and swim in this soup and tell us it’s just fine. All the kids around here have rashes, asthma problems, ear infections and the majority of our fishermen are out there working in this stuff 24-7 because it’s now the only job in town, and they’re all getting sick.”

Tracy chimes in. “We are seeing this all over the Gulf now — dolphins, fish, running from the dispersant and oil because they can’t breathe. Marine life knows to run out of the way, but we don’t.”

The day after Gene filmed the crabs fleeing the water, residents near Lake Pontchartrain reported finding thousands of dead fish and crabs in the canals near their homes. We drive over to Gene and his wife Vicky’s mobile home after they inform us of dead crabs and fish floating in sheen-covered water by their boat. Gene walks over to his boat in a nearby bayou. Dead crabs bob in oily water.

Gene looks out to the water, to nearby Bayou Rigolettes, and holds back tears as he says, “I smell oil all the time. It’s like it’s stuck in my nose.

“You know why all this hits so close to home? See those crab traps? I guess those are relics now,” Gene says. “I can’t fish now, and probably won’t ever be able to again, so where does this leave me? I feel like that old Indian from that old commercial who looks out at all the garbage and pollution and sees his whole world polluted.”