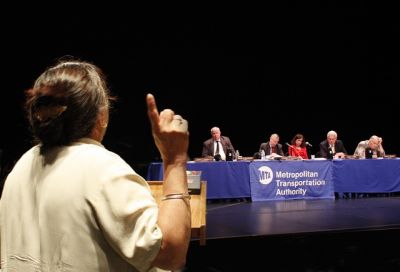 More than 100 transit workers and straphangers attended the Metropolitan Transit Authority’s public hearing at Hostos Community College in the Bronx on July 14. Many attendees expressed concerns that the cuts — which include closing or reducing the hours of 42 subway booths and eliminating 44 station agent positions — would make train stations unsafe.

“You guys are cutting the first line of defense for safety,” said Eric Paralles, a former transit worker and Bronx resident.

These reductions were originally proposed in 2009, but efforts by the Transit Workers Union Local 100 to block the layoffs have forced the MTA to hold public hearings in each of the five boroughs.