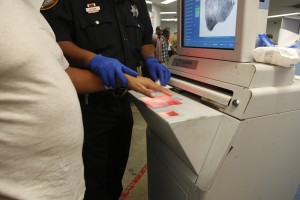 Despite concern that police involvement in immigration enforcement hurts public safety, the Obama administration announced today it has expanded a program that relies on such collaboration to all 25 counties on the Southwest border.

Some compare the program, called “Secure Communities,” to Arizona’s controversial SB 1070 law. The entire states of Florida, Delaware and Virginia signed up in July. It is now in effect in 494 jurisdictions in 27 states, and is set to be implemented nationwide by 2013 by the Immigration and Customs Agency (ICE).

“ICE is racing forward imposing its Secure Communities program on new states and localities every day, without any meaningful dialog or public debate,” said Bridget Kessler, Clinical Teaching Fellow at the Immigration Justice Clinic of the Benjamin N. Cardozo School of Law.

Counties that participate in Secure Communities automatically forward arrest data – such as fingerprints – to a database connected to ICE. Agents check the data for matches and can issue a “detainer” or request to hold the person who has been arrested  for 48 hours so that ICE can take them into custody.

Kessler helped several advocacy organizations file an open records request to find out more about the program. ICE released about a thousand pages of documents this week. They confirm Kessler’s concern that Secure Communities may lead police to arrest people who have not committed a crime in order to check their immigration status, a form of racial profiling.

For example, a review of the total cases submitted to the Secure Communities database from around the country found that a quarter of those who were later deported had no criminal record. But in specific counties, such as Travis County, Texas, 82 percent of the deportations resulting from the program involved non-criminals.

“This indicates police officers are picking up people on pretext, the criminal charges are getting dropped or dismissed, and they’re getting shuttled into deportation,” said Kessler during a conference call with reporters about the newly released data.

For those immigrants who believe they were unlawfully arrested, the options to avoid deportation can be slim.

“When someone is unlawfully arrested, there is the ability to contest the arrest when you’re in front of a criminal court judge,” noted Sunita Patel, a staff attorney with the Center for Constitutional Rights. “But detainers prevent the criminal proceedings from happeneing, or hide the unlawful conduct.”

ICE promotes Secure Communities as a way for police to help the agency target immigrants with serious criminal records. But their own data indicates that 79 percent of those deported due to the program are non-criminals or were picked up for offenses listed as Level 2 or 3, instead of the most serious Level 1.

Lower level offenses could include driving without a license or petty juvenile mischief – hardly the bad guys Congress likely had in mind when it allocated more than $1 billion in funding for Secure Communities.

In San Francisco County, Sheriff Michael Hennessey tried to opt-out of the program because he already had a program to notify ICE when his department had immigrants in custody who were charged or convicted of felonies. He estimated ICE picked up about 100 people a month. But he said ICE told him there was no possibility of opting out.

“At this point it appears it is a program that is forced upon individual law enforcement agencies no matter what the community wants or cares about,” said Sheriff Hennessey.

A fact sheet of some of the main findings from documents about Secure Communities that were released in response to the open records request is at UncovertheTruth.org.

You can read the documents in their entirety – and help highlight and make notes on their contents via an interactive PDF reader – on DeportationNation.org.

This article originally appeared on DeportationNation.org.