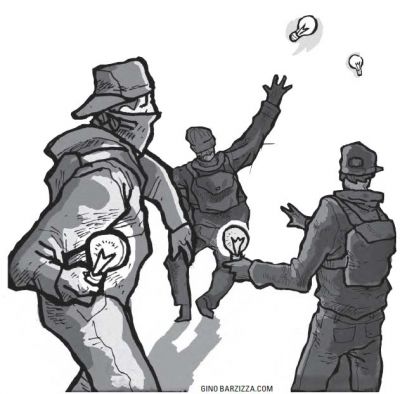 Ideas don’t just die. They have to be challenged with other ideas, and the forces sustaining them must be defeated.

Take neoliberalism, ushered in by Ronald Reagan and Margaret Thatcher 30 years ago. Neoliberalism promotes privatization, deregulation, trade and capital liberalization and the ideology of personal responsibility. These are just the means, however. The goal has always been to reverse New Deal-style redistribution by reconstituting upper-class power and wealth.

This is a simple fact. In the late 1970s, notes former Labor Secretary Robert Reich, the top 1 percent of the U.S. population raked in 8 to 9 percent of the annual income. By 2007 the share was 23.5 percent, on par with the 23.9 percent take by the gilded elite in 1928, on the cusp of the Great Depression.

The New Depression that began in 2008 is said to have discredited neoliberalism. (It’s not a recession when dizzying unemployment levels, new spending cuts and public sector layoffs mean the economy is poised to shrink again.) The bailout of the banks violated every neoliberal tenet: Government was there to plunk down trillions of dollars to keep the roulette wheel spinning, returning Wall Street to obscene profiteering in a year. The end goal was what mattered: making the public pay for the follies of the wealthy.

THE IMF COMES HOME TO ROOST

So neoliberalism may be discredited, but that’s irrelevant. In July the IMF issued its first-ever review of the U.S. financial sector, recommending the same poison that has sickened developing countries for decades. It called for the United States to reduce the nation’s debt to 70 percent of the GDP by 2015 by increasing gas taxes, eliminating the interest deduction on home mortgages, cutting Social Security, possibly instituting a national consumption tax and non-military “expenditure reductions.”

This is classic neoliberalism: lavish funds on state violence from Afghanistan to the recent G20 Summit in Toronto, but cut social services and squeeze more blood from the public. The IMF prescription would cripple the U.S. economy, as it is doing in Greece and Ireland. As government spending is cut and taxes increase, jobs disappear, consumer spending declines, tax revenues plummet, completing the vicious cycle with further job losses.

The IMF plan segues with the elite agenda of raiding Social Security to make the public pay once more for debt incurred by wars and bailouts. This is the purpose of Obama’s Debt Commission, which is stacked with Social Security looters. Targeting social welfare also deflects attention from taxing the wealthy or regulating the finance sector strictly.

Given the looming Republican tide in November, the Obama administration will likely be limited to more reverse Robin Hood policies and more military escapades in the Middle East, Asia and Latin America, such as the recent dispatch of 46 U.S. warships and 7,000 Marines to Costa Rica.

Neoliberalism will march on unless it is defeated by better ideas. The right’s success over the last 50 years owes much to its war of ideas. It repackaged an old doctrine, the unregulated free market, as the source of freedom and guarantor of democracy.

While the left needs to rejoin the battle of ideas, too many movements are mired in self-destructive postmodernism that rejects grand narratives, celebrates victimhood and resistance, distrusts any sort of power, obsesses over the micro and the personal, and exalts identity as the source of political knowledge and authenticity.

For instance, during protests against the G20 in Toronto, chaotic mass protests were subdued easily by violent policing. The marginally organized Black Bloc allowed the police to employ provocateurs, many of whom were caught on camera. Well-organized nonviolent direct action might have been more effective instead of the theater of repression and resistance, in which we play assigned roles with little hope of changing the script. And in the final act, we are victims of the police state. It is mainly through resistance or victimhood where people become worthy subjects for the left, but these frames tend to exclude agency, particularly our ability to act in a positive capacity.

In the Gulf of Mexico crisis, commercial fishermen are cast as victims. Certainly they have been injured by both BP and the government, but victimization implicitly validates a “way of life” synonymous with industrial capitalism. Is it a victory to restore a fossil-fueled industry responsible for ecological destruction through pollution, overharvesting and bycatch?

As victims the fishermen become our allies. But until they are victims they are not worthy subjects because — take your pick —they are white or middle class or conservative or heterosexual.

Seeing them as political agents, however, means confronting how their needs conflict with our politics. This is why many progressives shun difficult political issues regarding the state, organization, work and agency. It’s easier to fantasize about retreating to post-apocalyptic spaces where we can create our post-capitalist utopias.

This was evident in the selection of Detroit for the U.S. Social Forum. While I skipped Detroit, one activist who hails from Detroit and is close to the organizing committee for the Social Forum provided insight into the possibilities and limits of some key left tendencies.

He mentioned the nearly 900 urban farms and gardens in Detroit allow residents to buy fresh vegetables in a city without one grocery store. More than that, he said the farming movement was “revolutionary.” He explained that today’s youth, “having never known a world without instant messaging or texting” expect instant gratif icat ion. The slow, hard work it takes to grow food teaches the kids a different temporal experience crucial to organizing.

True. But can we build a movement out of farming in post-industrial blight? In many ways it’s just “Utopian Separatism.” The historical geography of America is littered with such attempts from Christian movements to communities of runaway slaves to back-to-the-land communes.

The problem with the micro is the state and capital will try to co-opt activists’ success. In Detroit, wealthy money manager John Hantz says he is going to invest $30 million to buy 5,000 acres in the city to create the world’s largest urban farm. Along with capital, he needs the state to change zoning, property tax and environmental laws. Yet his plans to build a huge commercial farm growing biofuels is hardly what Detroit needs, and some critics suggest Hantz is grabbing the land to build ritzy condos and shopping centers.

This shows how the ground under us will be reorganized by the state and capital unless we confront them politically. The failure of revolutionary movements to fundamentally alter the nature of the state hangs over our heads. It’s why many activists shun organization beyond the voluntary or hyper-local, and idealize community organizing. Left to its own devices, community organizing will work for needed reforms — improved schools, more public space, some more social welfare — but leave the state untouched.

This is the lesson of trade unionism, which fights for better pay and workplace conditions rather than challenging the nature of work and production. Though we can’t just recreate old models. In developed economies there are no longer legions of industrial workers looking to the revolutionary vanguard party for leadership.

Few on the left still cling to the orthodoxy of the worker as the sole agent of revolution. But expanding agency to the community means rejecting the empty slogan of “intentional community.” Today’s successful movements that resist and create are geographically rooted, whether it’s in Latin America, the rural insurgencies in the Southeast Asia or Detroit.

We still need visionary leadership and organization. But one that confronts the paradox of democracy — it’s about conflict, not just consensus — and is accountable to the base, while being able to concentrate power and resources in the fight against capital.

These limits hamstrung the global justice movement. A decade ago, tens of thousands of people would take to the streets to disrupt elite summits. It created a sense of power, but no idea of what to do because the methods were “horizontalist” and anarchic. The creative projects were radical spaces and puppetmaking, vegan kitchens and critical masses, all of which prize the mobocracy as the organizational form because it allows the individual maximum freedom, a sort of neoliberal anarchism.

We can’t lapse into defeatist ideas like everything is subjective or nothing can change until everything is changed, or put our faith in false prophets like Obama. We need to say what we are for — liberation, the redistribution of resources and collective control of our work and living spaces — while being open to other people’s experiences, desires and ideas. It is the ideas that will spark a new movement, one that can win the world.