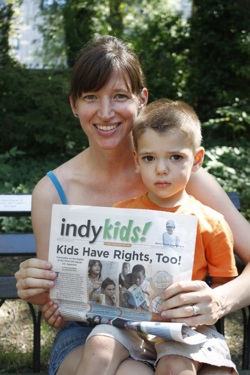 Do kids want to know what is going on in the world? Amanda Vender thinks so. For the past five years, Vender and a growing team of adult and child volunteers have been publishing IndyKids, a colorful, engaging 8-page newspaper for fourth- to eighth-graders and high school English Language Learners. The paper offers an unabashedly progressive perspective on current events and provides a steady diet of stories about kids taking action to make the world a better place. Based in New York, IndyKids is produced monthly during the school year (September through May) with five print editions and four online editions. It reaches thousands of students and teachers across the country. Vender recently spoke with The Indypendent’s John Tarleton about this unique project.

John Tarleton: What inspired you to start IndyKids?

Amanda Vender: I was working at Time magazine and noticed they had Time for Kids, which is a really nice, glossy publication, and I thought it would be nice if there was something like this but more progressive and grassroots. I didn’t have much exposure to anything political when I was growing up. And when I started to become acquainted with political movements and better understood what was really going on in the world and the U.S. government’s role in wars overseas in the 1980s, I felt like I should have known this. I spoke with some people at the New York Indymedia Center about my idea and they encouraged me to call a meeting. About eight people came to the first planning meeting for IndyKids in June 2005. Some of them are still involved. We published our first issue four months later and haven’t stopped.

JT: How have teachers and students reacted to the paper?

AV: A lot of teachers and students really love it, especially teachers looking to introduce something new into their classroom. Teachers who are already open to social-justice issues or would like to have their students think more critically find IndyKids fills that niche. And then for kids, we’ve had a good reaction. Kids really like the mixture of news, entertainment, puzzles, games, recipes and things like that.

JT: IndyKids has been criticized by some, including at least one right-wing talk show host, for being too political. Your thoughts?

AV: Go to any school or public library and look at the publications available, they’re horrendous. They pretend that they’re not political and just feed garbage to kids, like fashion tips or violent video games or ads for all kinds of candy. A lot of the librarians and other people we’ve encountered who are critical say, “IndyKids is political and these publications aren’t.” Our take is that everything is political. If it is promoting simply beauty and violence for kids, that is political also. It’s endorsing the status quo, that kids should not care about what’s going on in the world. IndyKids goes against that. Kids do want to know what’s going on in the world and they should be informed. They have the right to have access to information. IndyKids is there to help them. We don’t talk down to kids. We’re not afraid to talk about gay marriage, civilian deaths in Iraq and Afghanistan, torture, spying — IndyKids has covered all of these issues during the last five years.

JT: IndyKids was founded by adults, but now there are kids working on it too.

AV: We’ve worked through teachers to reach out to kids and to get kids writing for the paper. We also have some parents who bring their kids to our meetings. Then there are high school students involved who have more freedom to attend the evening meetings.

JT: You now have two children of your own. Do you think they’ll get involved in IndyKids?

AV: I think so. My son, who is almost three, already walks around with IndyKids, even in the apartment saying, “newspaper, newspaper.” So he’ll probably be good at distributing and he knows that I go to meetings for the paper. So he is already becoming familiar with the production cycle.