My stepson Yousif is 12 years old. He arrived from Baghdad to New York City in February 2009. He had been in the public school system for less than a week when the counselor at P.S. 163 in the Bronx suggested he should be placed in special education. She was fully aware he did not speak English.

Yousif shouldn’t have been at P.S. 163 in the first place. It was our zoned school, but the New York City Department of Education (DOE ) is supposed to provide “transitional bilingual education programs” (TBE ) for newly arrived students. For the six months before Yousif arrived, I had left phone messages with and sent emails to the English Language Learners office in the Bronx, trying to find out where the site for Arabic speakers was located. It was only after Yousif was in the United States and enrolled that I was able to schedule a meeting with the district English Language Learners representative.

Finally, I understood why she hadn’t returned my calls. There was no TBE site anywhere in the city, for elementary school pupils who speak Arabic. Nonetheless, the TBE website at the time described programs available for 15 different languages. In order to have a TBE program for any given language, the DOE had to identify 15 native speakers of the language living in proximity to one another. I noticed that for the 2009- 10 school year a detailed list of TBE sites was available on the DOE website, something that would have helped immensely the previous year. 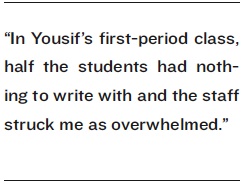 While most students in Yousif’s situation don’t have anyone to advocate for them, he is fortunate because I am a teacher in the public schools. Nonetheless, the best I could do was to move with my family to Brooklyn, where there is a public middle school that offers some Arabic language instruction.

However, Khalil Gibran International Academy (KGIA) — which barely opened three years ago after right-wing groups condemned it as a publicly funded “madrassa” — suffers from serious problems. It was supposed to be a flagship for the DOE ’s network of small, specialized learning communities, in this case, for Arabic speakers. But recently immigrated Arab students clashed with neighborhood kids from the projects and each other. And the school fell far short of its initial goal of having a student body of 50 percent Arabic speakers as it was moved from Park Slope to DUMBO . There was only one staff member who spoke Arabic. Yousif’s mother and I both found ourselves translating for school staff in disciplinary situations.

After two months of asking to observe a class, we were allowed to sit in one November morning, but only with the principal present. In Yousif’s first-period class, half the students had nothing to write with, and the school’s staff struck me as well-meaning but overwhelmed. Despite the presence of five adults, including the principal, in the room, students were still getting out of their seats to fight over the few pens and pencils to be had.

Meanwhile, in Harlem, I was in my third year as a well-meaning but often overwhelmed staff member at Frederick Douglass Academy (FDA), one of the last of the city’s large schools. FDA has nearly 1,500 students in grades 6-12. Despite the campaign by Mayor Michael Bloomberg and Schools Chancellor Joel Klein to break large schools up into smaller ones, it has survived because of its reputation for being an oasis of discipline and scholarship in a neighborhood where students are notoriously unmanageable. In the three years I worked at FDA, a handful of students went on to the Ivy League, a major accomplishment at a Title I school (typically, around 40 percent or more students in Title I schools come from low-income families).

In the 1990s, the school and its founding principal, Lorraine Monroe, were featured on 60 Minutes. Dr. Gregory Hodge, the school’s current principal, has been lauded for his success in educating young black males, and especially for its 100 percent graduation rate. He’s been written up in The New York Times and Time magazine as a brilliant champion of children. When a professor suggested I apply to FDA, I did so without hesitation — it sounded like a great place to work. Like KGIA, the reality was something different. By the end of last school year, I found myself in a school that seemed to be falling apart. Initially I thought I was overreacting, but as teachers with 10 years or more in the school began complaining that things had “never been like this,” I realized that in my three years at FDA I had witnessed the undoing of a school.

The school’s graduation rate is no longer close to the 100 percent statistic it once claimed. Last year, students roamed the hallways at will, disregarding teachers and security staff. We don’t have a librarian and the school’s most functional computer lab contains less than a full class set of machines. In the three years I taught sixth-grade English, a subject in which I am “responsible” for students’ state test scores, I was provided with two sets of books, enough to use in class but not enough for students to take home. One was an anachronistic set of vocabulary words that most students couldn’t read, the other was a set of test-prep   books.

But that didn’t mean there weren’t other ways to get materials. One of my more bizarre experiences at FDA was the day I went with my assistant principal to MS 278, a “failing” middle school nearby. She had been called by a colleague at 278 who let her know that we could come and take whatever supplies we wanted before the DOE emptied the school. We filled her minivan and then called our principal and requested he send a U-Haul to get the rest.

The worst part of working at FDA was the principal, whose management style was described by the district United Federation of Teachers representative as “abrasive.” In my experience, shouting was the norm, often peppered with derogatory words and phrases. Neither children nor teachers were spared the kind of verbal abuse one expects from a drill sergeant, not a school principal. But seeing most of my colleagues cowed or resigned to it, I rolled along, until he threatened me one day — saying, “teachers are gonna get their throats cut” — shortly after I and a couple other teachers had called the city and the state to complain about the lack of a certified special education teacher for the sixth grade.

FDA’s not the grittiest school in the city or the country, but its shortcomings highlight many of the problems with urban education. Social services and counseling are almost nonexistent. But as I began to advocate further for certain students, I directly exposed myself to the potential loss of my livelihood. But even our calls didn’t solve the special ed problem. Instead, the sixth-graders got a certified teacher at the expense of another class.

This was only the most obvious example of our principal not doing his job. As the year went on I began to compile documentation of harassment. I first called our district superintendent, whose secretary helpfully suggested I look for a job at another school. I also called the DOE ’s office of special investigations and was told that unless children were being physically harmed at the school, that office was unlikely to investigate any further than calling the school principal. The person I spoke with in the office of special investigations helpfully added that it might “come back on me” if I decided to file a complaint.

I decided to look for another job instead. This year, I start teaching high school at the Green School in Williamsburg, a small school that focuses on environmental sustainability.

I wish my former colleagues who remain at FDA only the best.