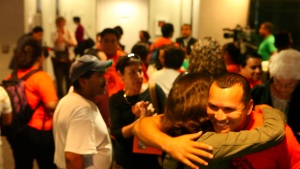 Tuesday marked what could be a historic turning point in efforts to opt-out of Secure Communities now that the process has been outlined by three high-level federal officials.

The Board of Supervisors in Santa Clara County, California, kicked things off in the morning when they voted 5-0 on a resolution to “direct the County Executive and County Counsel to notify U.S. Immigration and Customs Enforcement (ICE) and the California Department of Justice of the County’s opposition to participating in Secure Communities.”

“We are not here to do the job of ICE,” said Supervisor George Shirakawa.

Dozens of onlookers gave the supervisors a standing ovation.

Across the country board members in Arlington County, Virginia, voted 5-0 on a similar opt-out measure:

The Arlington County Board wishes to discontinue participation in the Secure Communities program. The County Manager is directed to formally notify Immigration and Customs Enforcement (ICE) and the Virginia State Police of Arlington’s intent to withdraw from the program and to meet with representatives of both agencies to:

a. Definitively outline the procedure and actions required for Arlington County to not participate in the Secure Communities program, and

b. Identify the actions that would be required of Arlington County regarding notification to ICE of “suspected criminal aliens” once Arlington becomes a non-activated community. 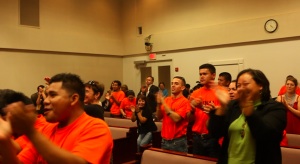 The vote was welcomed by elated cheers from immigrant activists and union members who’d gathered to support it.

“We had a big victory today,” said Margaret Huang, Executive Director for the Rights Working Group. “They took a strong position and made it clear that if the federal government expects to cooperate with local jurisdictions, they actually have to go through consultation and and discussion about programs before they are imposed on that local jurisdiction.”

Until now, only Washington D.C. had passed an opt-out resolution. Local officials in all three areas have expressed concern that the program had been activated without their approval.

“ICE didn’t ask us for our opinion,” said Arlington County board member Walter Tejeda. “It’s just something they imposed on us.”

Secure Communities shares arrest data from local jails with immigration agents. If ICE finds a match it can ask the jail to hold the person until they’re taken into federal custody. The program is supposed to target high-level offenders, but data released by ICE shows many of those identified committed traffic offenses or other small crimes.

Concerns about the program range from the distrust it creates between immigrant residents and local law enforcement agencies, to fear that police will target innocent people based on their ethnicity in order to check their status once they are brought to jail.

“Today we’re taking a step forward for fairness for immigrants. Too many punitive measures have been introduced that only highlight the negative aspects of immigrants,” Tejeda told Deportation Nation. “We have a thriving, working immigrant community that continues to not only enrich our community, but our county, our region, our state and our nation.” 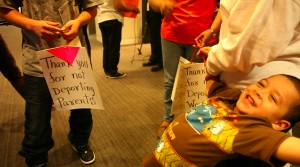 Arlington County’s resolution included a statement that it “remains firmly committed to the protection of civil rights and civil liberties for all people.”

Now immigrant advocates say they hope to launch similar opt-out campaigns elsewhere in Virginia. Secure Communities is currently active in all 129 of the state’s counties.

“We’re going to keep fighting it,” said Esteban Garces, a member of the Tenants & Workers United. “Arlington is the first step.”

Nationwide, Secure Communities is active in 632 jurisdictions in 32 states. In May, San Francisco’s Board of Supervisors also passed a resolution by a vote of 9 to 2 requesting to opt out of the program and Sheriff Hennessey resubmitted an opt out request letter to ICE earlier this month. Governors in Colorado and Washington are considering opting-out at the state level.