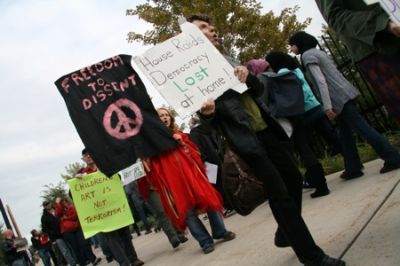 Agents of the Federal Bureau of Investigation contacted a dozen antiwar activists across six states Friday, serving subpoenas to eleven of them and raiding seven homes and the office. Federal agents carted out dozens of boxes of documents in front of married couples and their children, in what the subpoenas described in warrants as a dragnet to uncover material aid to alleged terrorist groups in Colombia and Palestine.

“I was downstairs with my six year old who was running around in her underwear trying to get me to let her watch cartoons before school,” says Steff Yorek, whose home was one of five raided in the Minneapolis area. “Just as I opened the porch door, the FBI got the door open and eight FBI officers stormed into the house.”

Her partner, Jess Sundin, began texting for legal support before her cell phone was seized by one agent. During the next four hours, a dozen other activists and lawyers arrived outside the house to observe and offer support. Their computers and documents were among those items seized, including boxes of Sundin’s recently deceased grandfather’s journals and employment history with NASA. Seized items included the computer used to edit Fight Back!, a Marxist-Leninist paper that nearly all of the activists across the country had contributed to, but the Sundin vows that the publication of the paper will continue.

Twenty-eight boxes were seized from the home of Joe Iosbaker and Stephanie Weiner, parents of two teenage sons, one of two homes raided in Chicago. Individual activists were contacted by agents in North Carolina, Wisconsin and California, none of whom received subpoenas. The empty office of the Anti-War Committee in Minneapolis was entered by FBI agents, reportedly with a key, and computers, binders, checks and check registries were among those items seized.

Tom Burke had left his Michigan home to find an internet cafe to write a press release after hearing from friends being raided in Chicago. “This car turned twice behind me, and I said that’s funny because I don’t know where I’m going,” he laughs. He called his wife to say he was going to head to her workplace. As he entered the parking lot, a black SUV came up close behind him. Three agents left their cars and served both him and his wife with subpoenas, shortly after she had just dropped their five year old at school.

The eleven anti-war activists, who had been among the leaders to organize antiwar marches for over nine years in their respective cities and worked openly on international solidarity efforts for people in Palestine, Iraq and Colombia, are set to sit in front of Federal Grand Juries in Chicago on October 5, 12, and 19. Protests have already been held in nineteen cities across the country and lawyers are hoping people call the Department of Justice to demand that the investigation be dropped.