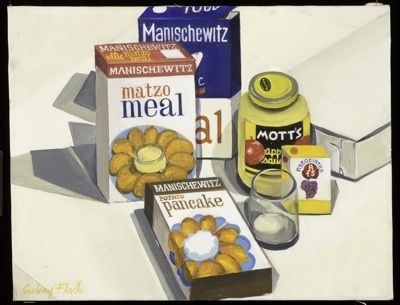 Do you know Phyllis Schlafly? An outspoken activist and accomplished attorney, a diehard conservative and lifelong right-wing pundit, a staunch advocate for traditional domesticity, she’d never let herself be mistaken for a feminist. But oh, how the ground shifts: among others on the right, Sarah Palin now trumpets herself as a proud feminist — a free-market, anti-abortion, “family values” feminist. The question becomes one of essences, foundations: surely not all powerful women are feminists, but what are feminists, then? In the ’60s and ’70s, many second-wave feminist writers linked feminism with socialism and with then-burgeoning social justice movements. Is there feminism without radicalism?

It’s a good question to consider while viewing Shifting the Gaze: Painting and Feminism, a small but potent exhibit at The Jewish Museum. The show is heavy on abstract painting, heavy on work from the ’60s and ’70s — times when “feminism” was more starkly realized. Or was it? Artists like Melissa Meyer and Joan Snyder give us bright, action-packed work in the famously masculine Abstract Expressionist idiom; like the proverbial female disciplinarian, or the woman who climbs the ranks in some brutal corporation, this work raises questions of what it means for women to triumph in male-dominated fields. Meanwhile, two pieces by Miriam Schapiro present an intriguing counterpoint. The first piece, “Fanfare,” is a charming, sensuous painting in the AbEx mode; the second, “Blue Burst Fan,” is a sort of decorative fabric work. Somewhere along the line, Schapiro’s project shifted from the more established model of abstract painting toward that of imbuing traditionally “feminine” crafts with a messy emotionality.

Concerns of women and creation are, perhaps, best looked for here in Louise Fishman’s small-scale works: paintings that reimagine Jewish ritual and myth from a personal, female perspective. These paintings access the sort of creative power which, for so many centuries, was considered the exclusive province of men, the chance to sit down at your desk, think about it for a little while, and then become a god. (Compare them with the chilly sarcasm of Deborah Kass’ “Double Red Yentl, Split,” a post-Warhol pop-portrait of Barbra Streisand; a very different sort of creation.)

Feminism has always been linked with other struggles, and many of the artists in this show have taken part in progressive activist movements, even if polemics never crept into their artwork. On the more abjectly political side, we have Nancy Spero and Leon Golub, the venerable husband-and-wife dyad who, for better or worse, did not shy away from blunt representations of violence and strife (relating to Vietnam and the Holocaust, in this case). For the most part, though, the show is a bit quieter than all that. Audrey Flack’s early-1960s still life “Matzo Meal” (in the key of Manischewitz) gently reflects on Jewish domesticity in the consumer era; Judy Chicago’s gridded abstraction “Sky Flesh” meditates on power and ritual via the sweetened hues of an afternoon sky. Younger sensibilities can be found in prankish, funny scenes from Nicole Eisenman and Dana Schutz. Amy Sillman gives us both a sophisticated, somatic abstraction from 2010 and some great comic strips (from Heresies magazine), drawn in the thick of the ’70s art world.

Maybe I just have some impulse toward the literal, or textual, but the two artworks that I found the most effective here, the most haunting, both involve Stars of David. In Dana Frankfort’s “Star of David (orange),” we see an artist playing with language and culture, pushing and pulling one of the most loaded icons you could ever find; or, she’s just painting some messy orange triangles onto a canvas. The work questions the power and cultural heft of simple symbols. Then there’s a little untitled painting of a woman’s truncated, naked torso with the breasts turned into Stars of David, and around her neck a pendant of a woman’s breast. This work wields a perverse power, like a political cartoon from some foreign newspaper. It’s a chance to reflect on issues of gender, ritual, institutions— issues that have been so adroitly explored by decades of feminist scholarship. The artist, Lee Lozano, ended up eschewing feminism: She felt that as an ideology, it was too limited and constricting. Go figure.