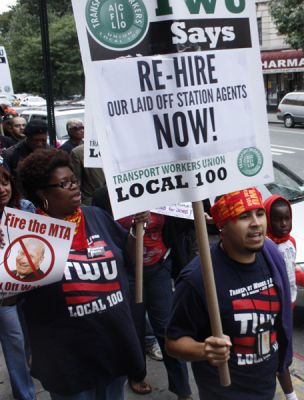 One hundred and fifty union activists and their supporters rallied and marched through central Harlem last Friday to protest the ongoing economic assault on working class people of color. Convened by 1199 SEIU and Transit Workers Union Local 100, the demonstration began at North General Hospital at 122nd and Madison. It then continued to Harlem General Hospital at 136th and Lenox before ending in front of a subway station entrance at 135th and Lenox. Nine hundred unionized health care workers were laid off at North General earlier this summer while Harlem General has endured painful budget cuts. Since May 2010, the Metropolitan Transportation Authority (MTA) has laid off 900 TWU workers, closed station booths, and cut or reduced several bus routes.“This march is long overdue,” said  Brenda Stokely, Northeast Regional Coordinator for Million Worker March, and the co-founder of Jobs for All Campaign! “Communities of color disproportionately suffer from economic disparities. We want to stop the hemorrhaging of fair wage paying jobs in our communities and hold legislators accountable for not prioritizing initiatives for job creation and security.”