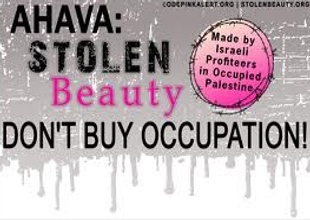 Walk into any Ricky’s store, a beauty shop chain in New York, and you will find a shelf filled with Ahava products. For $28, you can buy mineral toning cleanser; for $22, Dead Sea liquid salt; and for $9, purifying mud soap. The products made by Ahava (which means “love” in Hebrew) seem innocent enough, perfectly enticing for anyone fond of beauty products.

But looks can be deceiving. As activists from the peace group CodePink’s Stolen Beauty campaign are fond of chanting at protests, Ahava can’t hide its “dirty side.”

For nearly two years, an international campaign spearheaded by Palestine solidarity activists has targeted Ahava and the various stores that carry its products, including Ricky’s, calling for a boycott. The boycott campaign has heated up recently, eliciting push-back from Jewish organizations around the country and a response from the CEO of Ahava.

While Ahava labels its products “made in Israel,” they are actually manufactured in a settlement in the Israeli-occupied West Bank in Palestine. According to the Web site Who Profits?, a project of the Israeli anti-occupation group Coalition of Women for Peace, the company exploits Palestinian resources from the Dead Sea.

Under the Geneva Conventions, and various United Nations resolutions, all of Israel’s settlements–which house about 500,000 settlers—are illegal, as is excavating natural resources in an occupied area. Israel has occupied the West Bank, East Jerusalem and the Gaza Strip since the 1967 Six-Day War. The settlements are widely seen as an obstacle to the creation of a viable and contiguous Palestinian state.

“[The boycott] is about a just peace for Israelis and Palestinians,” said Nancy Kricorian, CodePink’s coordinator for the Stolen Beauty campaign. “The situation on the ground there is dehumanizing and demoralizing and terrible.”

Ahava, which rakes in profits of nearly $150 million a year, according to a Dec. 2009 CNN report, is owned by entities deeply involved in Israel’s settlement project in the occupied West Bank. According to Who Profits? 37 percent of the company is owned by Mitzpe Shalem, an illegal settlement located in the eastern West Bank; another 37 percent by the private investment fund Hamashibr Holdings, which also is a major shareholder in two companies that export produce made in settlements; 18.5 perent by the U.S.-based Shamrock Holding, owned by the Roy E. Disney family of Walt Disney fame, and which is a shareholder in a company that manufactures electronic detection systems that are used on the West Bank separation barrier; and 7.5 percent by the West Bank settlement of Kalia.

In an interview, Kricorian acknowledged that Ahava is a huge target, and likened the Stolen Beauty campaign to a “game of whack-a-mole,” as new places where Ahava products are sold pop up frequently. But Kricorian says it isn’t just about hurting the company’s sales.

“A boycott campaign is strategic, and it’s a long-term thing,” she said. “It’s not just about hurting the company’s sales. It’s also about educating the public about, in this particular case, the company’s illegal practices and sullying the company’s name and reputation.”

The campaign to boycott Ahava, in both the United States and around the world, has racked up some important victories. In August 2009, activists successfully pressured Oxfam International to drop Sex and the City star Kristin Davis as a spokeswoman because she was also working with Ahava. In November 2009, the Dutch Foreign Ministry agreed to investigate Ahava’s manufacturing and labeling practices. Costco, a large U.S. retailer, was pressured into halting the sale of Ahava products at its stores in January 2010. The Palestinian Authority, which governs the West Bank, has included Ahava products in its boycott of settlement products campaign, confiscating and destroying products made in West Bank settlements. Recently, four activists in London were acquitted on charges of trespassing after direct actions in 2009 in which they locked themselves onto oil-filled drums inside an Ahava shop.

The Stolen Beauty campaign, which began in the aftermath of the brutal Israeli invasion of the Gaza Strip in 2008-’09, is part of the larger boycott, divestment and sanctions (BDS) movement that grew out of a 2005 call by a vast swathe of Palestinian civil society groups for BDS against Israel. Modeled on the anti-apartheid movement that targeted South Africa, the Palestinian-led BDS movement demands that Israel withdraw from the occupied Palestinian territories, implement equal rights for Palestinian citizens of Israel and recognize the “right of return” for Palestinian refugees and their descendants who fled or were expelled from Palestine during the1947-’49 Arab-Israeli war.

“The BDS campaign has become the most effective, morally consistent, nonviolent form of solidarity with the colonized Palestinians against Israel’s apartheid and colonial rule,” Omar Barghouti, a founding member of the Palestinian Campaign for the Academic and Cultural Boycott of Israel, wrote in an e-mail. “The Stolen Beauty Campaign against Ahava, led by our partner CodePink, is a truly inspiring BDS campaign, as it is creative, focused, well-researched and very effective in conveying the message across to and, more crucially, in mobilizing BDS action in a wider, more mainstream audience.”

The Israeli government has taken notice of the growing BDS movement. The Israeli Knesset recently passed a preliminary reading of anti-boycott legislation that would impose fines on Israeli activists promoting boycotts of Israel. A February 2010 report by the Reut Institute, an Israeli think-tank with close ties to Israel’s government, identified the BDS movement as an threat to the state.

In the United States, the BDS movement, and the campaign against Ahava, has also generated controversy. After a Washington, D.C.-based group protested in July 2010 against Ahava products being sold in Ulta, a beauty store, the Jewish Community Relations Committee of Greater Washington urged supporters to buy Ahava products.

Brooklyn’s Ricky’s shop has also become the epicenter of a dispute over the Boycott Ahava movement. After a July 9 protest outside the store led by CodePink’s Stolen Beauty and Brooklyn for Peace, which signed onto the campaign in May, a group of rabbis in Brooklyn drafted a letter in response, urging people to buy Ahava products and denouncing the campaign. The rabbis’ letter claimed that “CodePink ignores the history and legal status of Mizpeh Shalom” because it is located in “‘Area C’, a huge section of the West Bank over which Israel, again by joint agreement, was granted full control, except over Palestinian civilians.” (The Area C designation comes out of the 1993-era Oslo Accords between Israel and the Palestinian Authority. Area C incorporates all West Bank settlements.)

“Local Jewish leaders find the idea of a boycott of Israel to be a misguided and one-sided approach to a complex and deeply troubling conflict,” said Rabbi Andy Bachman, a signatory to the letter and a member of the liberal group J Street’s Rabbinic Cabinet. “The problem with a boycott is there’s one side that’s all right and another side that’s all wrong. If that’s what the boycotters think, then there really is nothing to discuss. But if not, then why not boycott Palestinian business for years of rejecting peace accords?”

So far, Ricky’s has not budged, and continues to sell Ahava products. Dominick Costello, the president of the store, refused to comment.

The relentless targeting of Ahava hasn’t gone unnoticed by the company. A letter that has recently been circulated by Ahava to its business partners states that “our company and products have been the subject of unfortunate, ugly and clearly politically motivated smear attacks” that are being pushed by a “couple of small radical fringe organizations, which are part of a larger and more insidious campaign aimed against the State of Israel.”

The surge in attention to the boycott campaign is a sign that “we’ve gotten attention to issue of settlements like we never got before,” said Naomi Allen, an activist who sits on Brooklyn for Peace’s board and is involved in the group’s Israel/Palestine committee. Beginning this month, Brooklyn for Peace plans to hold protests outside the Ricky’s shop in Brooklyn on the last Tuesday of every month.

“This is not an argument that we’re going to lose, because [what’s] right and international law are on our side,” Allen said. “The issue of Ahava is a clear-cut issue. There’s no excusing the fact that this is occupied territory which is being stolen from the rightful owners and exploited for profit that isn’t being shared with the rightful owners.”

This article originally appeared on Alternet.