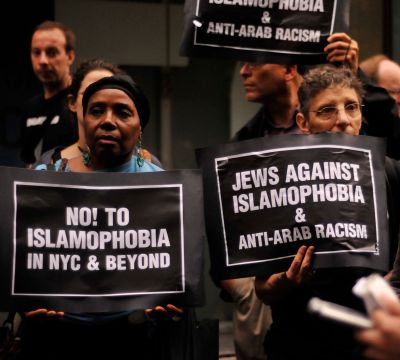 A coalition of four Jewish groups, backed by a wide array of peace and justice organizations, held a demonstration Sept. 16 outside the Simon Wiesenthal Center’s Museum of Tolerance in New York, denouncing the organization’s opposition to the Islamic community center in lower Manhattan.

Organized by Jews Say No!, American Jews for a Just Peace, Jewish Voice for Peace and Jews for Racial and Economic Justice, about 100 demonstrators walked in front of the museum on East 42nd Street in midtown Manhattan, chanting “Islamophobia isn’t pretty, it has no place in New York City” and “Islamophobia is a shame, New Yorkers say not in our name.”

“If you’re going to put tolerance in your name, you got to put it in your game, and the Museum of Tolerance has not done that,” Jon Moscow, an activist with Jews for Racial and Economic Justice, told members of the press.  “Statements that its leaders have been making have been feeding this frenzy of Islamophobia and anti-Arab racism.”

As the Cordoba House controversy, manufactured and fueled by far-right blogs and the right-wing press, heated up, Rabbi Marvin Hier, the dean and founder of the Simon Wiesenthal Center, appeared on Fox News in early August and criticized the proposed Muslim community center.

“Having a 15-story mosque within 1600 feet of the site is at the very least insensitive,” Hier said.

The Park 51 Muslim community center, of which the Cordoba House interfaith center will be a part, has sparked an acrimonious national debate over Islam and religious freedom, setting the stage for an upsurge in anti-Muslim sentiment across the United States.

The Simon Wiesenthal Center describes itself as an “international Jewish human rights organization” that promotes “human rights and dignity.”

The Wiesenthal Center’s executive director, Rabbi Meyer May, told Crain’s New York that “religious freedom does not mean being insensitive … or an idiot.”

“The museum says its aim is ‘to challenge people of all backgrounds to confront their most closely held assumptions and assume responsibility for change.’  That’s a beautiful vision.  But it’s one that is wholly inconsistent with the actions of the museum’s leadership,” said Hannah Schwarzschild of American Jews for a Just Peace. 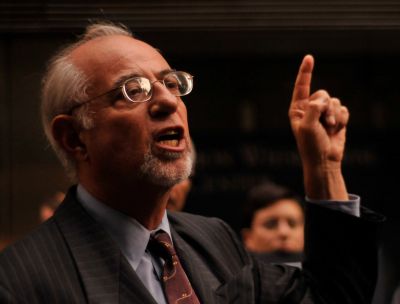 Demonstrators also harshly criticized the center’s decision to build a Jerusalem branch of the Museum of Tolerance on top of a centuries-old Muslim cemetery, known as the Mamilla cemetery.  They said that the center’s project, which has resulted in the “disinterment of hundreds of graves,” according to the Center for Constitutional Rights, is another example of the center disregarding the rights of Muslims.

“I’m just going to take a minute to tell you a new definition of a Yiddish word called ‘chutzpah.’ … It refers to brazen nerve,” said Richard Levy, a lawyer working with the Center for Constitutional Rights on a petition filed with several international bodies to halt the construction of the museum in Jerusalem. “This cemetery, which stands in West Jerusalem for a thousand years, is now subject to the bulldozer of this organization. So that’s the meaning of the word chutzpah: to say you stand for tolerance, and perform that kind of an act, is the most despicable kind of hypocrisy.” 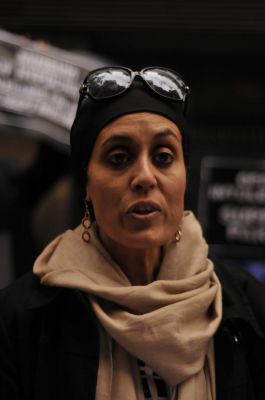 Also speaking at the demonstration was Debbie Almontaser, herself the victim of a anti-Muslim, anti-Arab smear campaign reminiscent of the controversy over the Park 51 project that ultimately forced her to resign as the founding principal of the Khalil Gibran International Academy, a dual-language Arabic public school in Brooklyn.

“Why are the museum and Simon Wiesenthal leaders not taking a principled stand against the hatred of Islam and Muslims?” Almontaser asked.  “I say to them: Be just. Speak to your mission.”