The Indypendent was launched 10 years ago this month to give voice to grassroots social justice movements here in New York and around the world. As millions of children return to school, we dedicate this special issue to bringing forward the experiences and insights of parents, teachers, students and community activists who are rarely heard from in what, to date, has been a one-sided debate over the future of public education; a debate dominated by the wealthy and the powerful.

On Aug. 16, almost three weeks after state education authorities revealed that student test score results were inflated, a Brooklyn mother of four school-age children stepped up to the microphone at the meeting of the Panel for Educational Policy. She demanded to know how city school officials planned to help tens of thousands of students now considered non-proficient in English and math. The chairperson ruled Zakiyah Ansari out of order and told her to wait until the end of the meeting to raise her concerns. 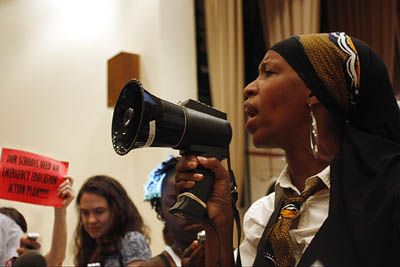 His rebuff sparked a raucous protest from about 80 other parents, students and teachers who’d just sat through a droning presentation that ignored their concerns. Unable to subdue the crowd, the board members fled from the stage. Members of the audience gathered at the front of the auditorium to voice their frustrations.

“Where is the support for our schools, our principals, our teachers? Where is it?” Ansari asked. “Our kids are dying literally in the street for lack of education.” “You failed my son and all of our children in New York,” added Esperanza Vasquez, a mother of two from the Bronx. Her son, who is entering ninth grade, had received a top ranking on the state’s standardized tests last year, but discovered he needed to take remedial classes after winning a scholarship to a Catholic school this year.

The confrontation suggests that Mayor Michael Bloomberg and Schools Chancellor Joel Klein’s experiment in running New York City’s schools like a business will face increasingly aggressive opposition from an array of groups.

While some advocates question whether the city’s standardized test scores ever reflected actual learning, Josh Karan, a longtime community school activist in Washington Heights thinks the test-score revelations could catalyze a deeper public rejection of the status quo.

“It’s the equivalent of Toto pulling the curtain from the Wizard of Oz and revealing that it’s been a bunch of tired old men who have been pretending to be wizards for the last eight years,” said Karan. “It gives us an opportunity that hasn’t existed for a long, long time.”

The Coalition for Educational Justice (CEJ), which led the shutdown of the Aug. 16 school board meeting, is preparing a broad-based campaign to push the city’s Department of Education (DOE ) to address problems highlighted by the test-score revelations. Drawing on alliances with unions, youth groups, community-based organizations and elected officials, CEJ will launch the campaign Sept. 16 with a rally and press conference outside the DOE ’s headquarters in lower Manhattan.

CEJ and its allies are calling on the DOE to provide more resources for struggling students and schools and not to base any more high-stakes decisions (such as closing schools) on standardized test scores.

While CEJ pursues incremental reforms, others insist that mayoral control has to be directly challenged, either through a forcing Klein to resign or pushing the State Legislature to revisit the mayoral-control law. That law, renewed in 2009, doesn’t expire until 2015.

While there has been a flurry of meetings and discussions, no clear strategy for how to confront mayoral control has emerged. Julie Cavanagh, a teacher of ten years at P.S. 15 in Red Hook, Brooklyn, and a member of the Grassroots Education Movement (GEM ), said she expects things to pick up once the school year gets under way.

“We want to work smart as opposed to doing something for the sake of doing it,” Cavanagh said.

Groups such as GEM and the Coalition for Public Education/Coalición por la Educación Pública (CPE/CEP) are organizing school-based committees or councils that empower parents, teachers and community members to advocate for their schools. Only a handful of such organizations exist, but activists envision them as building blocks for a long-term struggle to bring the school system under community control.

“Parents, teachers, and community members will have more than just a seat at the table. They will have a strong organizational model that lends itself to greater autonomy and decision-making power when it comes to their schools and their communities,” Cavanagh said.

CPE, which is rooted in communities of color, is pursuing a multi-year campaign to transform the school system. It is looking to develop parent/community councils at individual schools and elect a broad-based “People’s School Board” that they believe would have more legitimacy than the current school board, whose majority was appointed by Bloomberg. They also want to see the current school system remade so it can better serve the needs of black and Latino children.

“A small number of students are doing well,” said CPE co-chair Akinlabi Mackall. “But an unforgivably large number are not. We want to change that.”

Enron in the Classroom 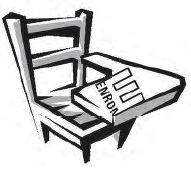 New York City rates students in third to eighth grade on a scale of 1 to 4 on state tests, with 1 being the lowest level and 3 being “proficient,” or passing. For years, Mayor Michael Bloomberg and his schools chancellor, Joel Klein, have touted steadily rising test scores. At the height of the test-score bubble in 2009, Bloomberg trumpeted the results to persuade the state Legislature to renew mayoral control of the city’s public schools for another six years and to help himself to a narrow re-election victory. This summer, the state Department of Education announced that test-score results from previous years had been inflated. When it reset the bar for passing the test, New York City’s education miracle vanished.