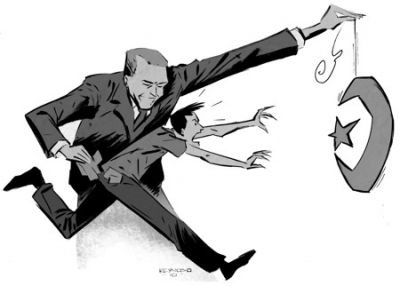 The current nativist impulse is not new. The right’s anti-Muslim campaign is eerily similar to 19th-century anti- Catholic bigotry in America. Catholics here were subject to discrimination and violence because many didn’t speak English; religious practices such as confession, veneration of saints and transubstantiation seemed alien; many of their women (nuns) donned strange garb; and they were characterized as a fifth column loyal to a sinister foreign power, the Pope.

Likewise, Islamophobia goes back two centuries to Orientalism, which portrayed much of the world, particularly Arab and Islam, as barbaric and irrational in contrast to an enlightened West. More recently, American popular culture reacted to the Arab oil boycott in 1973 and the Iranian Revolution in 1979 with the image of the despotic sheikh and fanatical mullah who prey upon a West enfeebled by secularism and liberalism. From there followed the “Worse Than Hitler” parade: Grand Ayatollah Khomeini, Yasser Arafat, Muammar Qaddafi, Saddam Hussein, Osama Bin Laden and Mahmoud Ahmadinejad.

The Islamophobia that sprouted after the Sept. 11 attacks was planted in this noxious soil. Curiously, it has taken nine years for Islamophobia to reach a fever pitch, at least in America (Europe was quicker to the game).

One explanation is Bush, who, after 9/11, described Islam as “a faith based upon peace and love and compassion.” Bush had to deny the role of religion in the “war on terror” to ensure broad international support for new wars. Later, however, Bush claimed “Islamofascism” was an “ideology that is real and profound.” So while Bush the Republican was willing to throw red meat to the bigots, Bush the president was compelled to tone down the bigotry in the interest of statecraft.

Now, freed from the burdens of power, the Republicans can reap the benefits of Islamophobia by stoking the base passions of the right, while not having to pay the price for any international repercussion. What makes the bigotry so powerful at this point is Obama.

Going back to the 2008 election, the right has successfully painted Obama as the Other. Since Obama took office, the percentage of Americans who say Obama is Muslim has increased sharply. In August, during the run-up to the anti-Muslim rallies on Sept. 11, one poll found that 31 percent of Republicans thinks Obama is a Muslim, nearly double the percentage who said so in March 2009.

Believing Obama is a Muslim or foreign born or motivated by “Kenyan anticolonial behavior” is indicative of the conspiratorial mindset that the right cultivates. In Mobilizing Resentment, Jean Hardisty writes that the “right uses three specific forms of intolerance — stereotyping, scapegoating and demonizing — to mobilize and organize recruits.” These techniques “reinforce an us-them dichotomy” and “help a protest movement fix blame for social ills on easily understood targets.” Hardisty explains that demonizing the hated group “draws anger away from real sources of social ills.” This “allows for greater dominance by elites, while creating the impression of increased empowerment for those expressing their intolerance.”

Stoked to a white-hot fury by the right, many Americans castigate Obama and his policies. But this opposition is both remote and abstract; venting rage on mosques and Muslims offers a concrete outlet.

The hatred (the appropriate term) goes far beyond opposing the Cordoba House in Manhattan. A Gallup poll from 2006 found that 39 percent of Americans think Muslims should carry a special identification. Today, a Time magazine poll found that a majority of Americans have an unfavorable view of Muslims and nearly one-third think Muslims should be barred from running for president or sitting on the Supreme Court.

These sentiments get acted on with public hate-spewing and attacks against mosques, a rise in hate crimes against Muslims over the last decade and a huge surge in employment discrimination.

By targeting the Other, the right also defines “real” Americans. Nearly 50 years ago, historian Richard Hofstadter argued that the “modern right wing … feels dispossessed.” They feel “America has largely been taken away from them and their kind.” Anti-Muslim protests are both an attempt to deny the public display of the other’s symbols and a way to stoke resentment that the government is devaluing the true majority’s values and beliefs.

While the racism is real, it is given coherence by right-wing fanatics like David Horowitz, Frank Gaffney, William Kristol, Michelle Malkin, Gary Bauer, Newt Gingrich and Sarah Palin, who support and in some cases organize and fund the anti- Muslim campaign.

Since last year, the right has been hysterically claiming that Sharia, or Islamic law, is being imposed in the United States with the backing of the Obama administration. Frank Gaffney’s Center for Security Policy has been leading the charge, having just published a 177-page report entitled “Sharia: The Threat to America.”

Linking Obama to Islam is a way to turn tactical opposition in the upcoming midterm elections into a holy war in which no compromise is possible. Hofstadter described it as a paranoid mindset that believes “the enemy is totally evil and totally unappeasable [so] he must be totally eliminated.”

In a recent Newsweek poll, a staggering 52 percent of Republicans said they think it is definitely or probably true that Obama “sympathizes with the goals of Islamic fundamentalists who want to impose Islamic law around the world.”

These wild beliefs reveal how much of the population is mentally unhinged. Though if the Obama White House had shown as much concern for the average worker as it did for investment bankers, there would be far less economic and social anxiety for the right wing to exploit. But that’s now history.