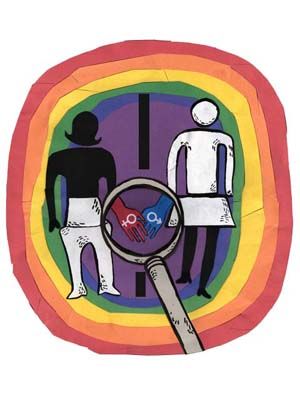 On Feb. 12, 2008, 14-year-old Brandon McInerney entered E.O. Green Junior High School in Oxnard, Calif., pulled out a gun and shot eighth-grader Lawrence “Larry” King twice in the head before a roomful of students.

While we may not comprehend the reasons for this killing, the media soon began to paint a picture all too familiar for out queer youth who have experienced bullying or harassment in school and beyond. Larry was an openly queer teenager who defied gender boundaries and had begun to wear makeup, jewelry and high-heeled shoes to school. He was frequently taunted and eventually learned to defend himself by utilizing anti-queer bias to his advantage — Larry flirted with his bullies. Unfortunately, this tactic worked against him; some say Larry asked Brandon to be his valentine a few days before being shot.

Larry’s outcome is not surprising in the case of queer youth. Young queer people often experience intensely negative attention from their peers. Adults commonly dismiss their identities and experiences. And, with few or no role models to guide them into adulthood, queer youth are often left alone to make sense of the oppression they face.

But despite the invisibility, dismissal or hostile attention they receive, queer youth are less inclined than youth growing up in the 1990s to regard their sexuality as their biggest hurdle or their most important personal quality. Indeed, definitions of queerness have become blurred. Young people today reconstruct concepts of gender and sexuality and create more complex and layered identities. This new cultural landscape challenges adults — including queer adults — to rethink notions about queer adolescents.

In our work with queer youth we use the term “queer” to denote those who do not experience their gender or sexuality within the boundaries of societal expectations. This includes anyone who falls under the LGBT label — those who identify as lesbian, gay, bisexual and/or transgender — but also it reflects a growing consciousness of fluid gender identities, presentations and sexual orientations that do not necessarily assume a static identity captured within those labels. Queer also reflects an understanding that when gender escapes the bounds of the binary, terms that rely on gender distinction — such as “lesbian,” “gay” and even “bisexual” — become less concrete. In addition, queer includes people who are not yet certain of their sexual orientation or their gender identity. Often identified as “questioning,” these individuals are still attempting to understand themselves in terms of gender, sexual and/or romantic attraction.

Although their visibility and self-acceptance is growing, queer youth still face serious oppression. Being queer can represent a constant struggle between self-acceptance, authenticity and safety. In school, they are harassed, bullied and even murdered simply for being lesbian, gay, bisexual or transgender. Identity questions become ones of safety in environments where queer youth are attacked by their peers.

According to the Gay, Lesbian and Straight Education Network’s (GLSEN) 2007 National School Climate Survey, 86 percent of LGBT students surveyed reported being verbally harassed in school in the past year because of their sexual orientation, while 90 percent of transgender students surveyed reported being verbally harassed because of their gender identity or expression. The threats these students face drive them to avoid school; queer students skip school at five times the rate of nonqueer students, according to GLSEN. This affects their academic achievement and can be detrimental to future educational and professional progress.

Visibility, which is key to ensuring acceptance, can be promoted through incorporating focuses on queer history, literature and culture in the curriculum and invigorating class content with positive queer inclusion.

When the sexuality of queer figures is hidden, it signals to students that either queer people do not contribute to society or the queerness of notable people is shameful and should be hidden. By allowing queer subjects to be broached openly and honestly in the classroom, students learn that these topics — and therefore, queer people — are not taboo.

Additionally, queer youth need allies in the classroom. When queer youth can identify supportive teachers, administrators and support staff, they are more likely to feel they belong in the school community. Coming out as an ally shows a commitment to ensuring that queer students and all youth have a right to learn in a safe and respectful environment.

S. Leigh Thompson and Alexander Santiago- Jirau are co-founders of The Forum Project (theforumproject.org), a New York-based project of artist-advocates who use critical pedagogy to help individuals and communities explore and understand the world.