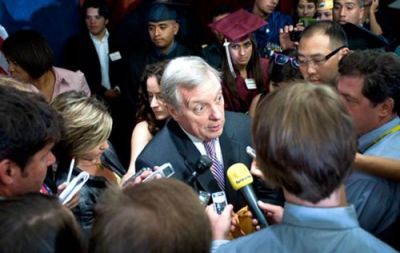 As soon as it looked like the motion for cloture on the defense authorization bill had failed on the Senate floor this afternoon, DREAM Act activists spared little time before regrouping and pushing a new strategy.

“We cried, and then we went right back to Twitter, went right back to Facebook,” said Sonia Guinansaca, an organizer with the New York State Youth Leadership Council, who was at a rally in New York City today outside Sen. Charles Schumer’s office. Just half an hour after the votes were tallied, the NYSYLC, together with a coalition of DREAM Act groups, announced that they were gathering folks on the East Coast to head to Washington, D.C., immediately and pressure Senate Majority Leader Harry Reid to move the DREAM Act as a stand alone bill, unattached to any other piece of legislation.

“We are going to pressure the Republicans,” Guinansaca said. “It is shameful how they can play around with our human rights.”

Senate Republicans sealed the short-term fate of the DREAM Act and the “Don’t Ask, Don’t Tell” repeal today when Republicans shut down a motion for cloture on the defense authorization bill, blocking the amendments from being raised for debate.

The final tally was 56 to 43, with all 41 Republicans, along with Arkansas Democrat Blanche Lincoln, voting against cloture. Reid was the 43rd no vote, a move that keeps more procedural options open to him. Following the vote, he immediately filed a motion to reconsider.

Immediately before the roll call vote was taken, Minority Leader Mitch McConnell called for unanimous consent to keep the defense authorization bill moving—as long as Republicans had the ability to add amendments, the first 20 of which had to be strictly concerning defense matters, and none of which could be immigration-related. The move was an obvious dig at the DREAM Act, which would provide undocumented youth the opportunity to adjust their status if they agreed to a two-year commitment to either the military or college. Reid announced last week that he intended to introduce both a DADT repeal and the DREAM Act, which would benefit almost a million young people, as amendments to the $725 billion bill.

Reid opposed McConnell’s motion, citing again for Republicans that the Defense Department actually fully supports the DREAM Act, and had included the bill as part of its strategic plan for the upcoming year.

All morning long Republicans avoided debate on the DREAM Act and instead focused on “Don’t Ask, Don’t Tell,” arguing that it was wrong for the Senate to take action on the policy before the results of a Defense Department survey that President Obama has ordered are returned.

“I am not opposed in principle to bringing up this defense bill,” McCain argued. “I am not opposed to having a full and informed debate. What I am opposed to is bringing the defense bill now before the Defense Department has concluded its survey of our men and women in uniform which gives us the chance to tell them their views.” The survey is scheduled for November.

Maine Sen. Susan Collins, who DREAM Act backers were hoping would side with them, said she wanted the ability to attach Republican amendments to the defense authorization bill. She said she took issue with Reid’s limiting the amendments to just three Democratic agenda items. Reid had said already that he would allow such action to take place. But such was the nature of the morning debate—ducking and hiding behind procedural issues and focusing direct rancor the DADT repeal.

DREAM Act’s major Senate champion, Dick Durbin, took to the mic to voice his outrage afterward. “Where is the justice in this decision?” he scolded Republicans. “At least have the courage to let us bring this matter to this to the floor and stand up and vote no. But to hide behind this procedural ruse, this unanimous consent request, is totally unfair.”

It was politics as usual in D.C. But for thousands of DREAM Act activists around the country, it was also a pivotal day that marked yet another legislative setback in their long campaign. Activists have been pushing for some version of the bill since 2001, but every time it has been raised, the bill, which enjoys bipartisan support, has been unable to clear filibuster threats.

“Thousands of immigrant youth and students have been activated,” said Kent Wong, the director of the UCLA Labor Center. “And that’s been the variable that has brought this as far as it has come.”

Activists have made clear that they are not stopping. According to Guinansaca, in just a week, DREAM Act supporters were able to make more than 25,000 calls to senators’ offices. “At first we had, for every one call, 10 calls against [the DREAM Act],” she said. “But toward the end it was one to one.”

Guinansaca said DREAM Act supporters made 4,000 calls the first day that Reid announced his DREAM Act intentions. Since then, activists all over the country have staged 24-hour vigils, made human billboards by spelling out messages to senators with their bodies and camped out outside senators’ offices—all to urge the Senate to pass the bill.

“The hardest part about this work is going back to the young people who are going through a big losing vote for the first time,” said Matias Ramos, an activist and board member with United We Dream. Ramos, who had been camped out in D.C. working with other immigration reform strategists, said that ultimately, “I feel happy because it was a huge push that was unprecedented. We have the ability to inspire people and really get people to take action.”

Congressional insiders say that at this point, it’s likely that the defense authorization bill will hang out in limbo until after the elections are over. Much depends on the results of the midterms. If the Democrats do retain control of the House and Senate, Democrats may be in a position to revisit the situation with a new class of congress people in the next term.

“I think what this has shown is that the only way to win immigration reform is by building a mass movement,” Wong said. “The whole approach that we rely on the good graces of the Democratic Party leadership or backroom deals without building a movement is a failed strategy. So the reason the DREAM Act is now front and center is precisely because there’s a powerful movement that the immigrant youth in the country have built.”

Guinansaca agreed. “We’re not going to stop organizing,” she said. “This is not over.”

This article originally appeared on ColorLines.