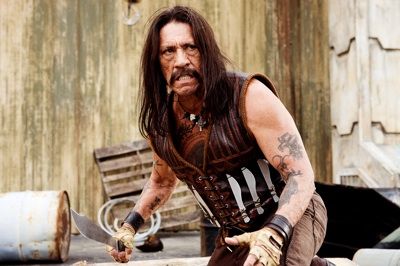 Speeding on a dusty road to arrest a drug lord, the Mexican Federale named Machete is told to turn around. Instead he rams his car into a drug den. Guards open fire, machine guns jumping in their arms like jackhammers, but our man is twirling his scythe-like machete. Heads roll on the floor as necks spurt fountains of cherry-red blood.

An outrageous revenge fantasy, Machete is a political catharsis for audiences frustrated by the rising racism — from the slashing of a Muslim taxi driver to Arizona’s season of hate. Muslims and Mexicans have become the new scapegoats for conservatives who channel white anxiety into Islamophobia and racism for political gain.

Racism is terrifying but here is a movie that purges terror into over-the-top revenge. Machete, played with lumbering grace by Danny Trejo, is offered $150,000 to kill an immigrant-bashing Texas state senator played by Robert De Niro. Our hero is double-crossed, and one of the wildest fight scenes in recent cinema begins. From a disemboweled man whose ropey intestines Machete uses to dive out a window to a crisp-fried corpse with a Thanksgiving turkey timer stuck in it, the movie’s violence is cartoonish. It gives the audience the pleasure of revenge without the consequence of guilt or fear of stigma.

The first act of a narrative is to create identification with the protagonist. We identify with Machete because of his decency. His family was killed by the drug lord because he refused a bribe. He gave his pay for the hit to a taco truck driver named Luz, played by Michelle Rodriguez, who is also She (à la Che), the head of the Network, an underground movement of workers. He even asks his priest played by Cheech Marin for permission to kill his enemies.

Machete’s simple moral code demands violence to discipline a corrupt world. He is a symbol for the repressed rage of terrified immigrants. And it’s no wonder as bad guys close in on Machete that the working-class immigrants rally around him.

What follows is a lesson on the difference between reactionary and revolutionary violence. As philosopher Slavoj Žižek wrote in The Ticklish Subject, “The Right legitimizes its suspension of the Ethical … by a reference to its particular (religious, patriotic) identity which overrules any universal moral standards. The Left legitimizes its suspension of the Ethical precisely by means of a reference to the true Universality to come.”

In the climactic battle we can see the difference as the Network has Mexicans, whites, blacks, women and men fighting together in Žižek’s “true Universality” against the cowboy white men with guns protecting their “particular identity.”

So when conspiracy-addled radio host Alex Jones says the movie could spark a race war he misses the point. We are not in a race war but in a racist war because the systemic violence is one way, targeting Mexicans (and Muslims).

Machete’s violence is comical, even gross, but moral because it destroys a system that has destroyed generations of people. It’s why audiences howled with laughter in May when the trailer came out and mountain-like Machete, belt full of knives, stared at the audience and said, “This is Machete with a special Cinco de Mayo message … to Arizona!”