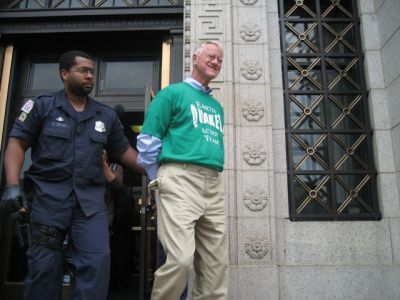 I tunneled up from sleep, realizing that my six-year-old great grandson was at the foot of my bed, all dressed for his school day and wanting to touch base with me before he left.

He jumped in and crawled into my arms while I woke myself up a bit more. “Good morning,” I said as I gave him a squeeze.

“Why did you go to jail yesterday?” he asked, alert with curiosity. I could feel his worry about me ebbing as he felt the familiar strength of my arms around him.

“I didn’t think President Obama knew how strongly your Pop-pop and lots of other people felt about his letting coal companies blow up mountains,” I said. “We thought if we let ourselves be arrested it would get his attention.”

“Yasin, time to go to school.” It was Yasin’s mom Crystal at the door of my bedroom. She came further in to take a look at me; she too worried sometimes about her seventy-two-year-old grandfather.

“Have a good day at school,” I said as he wriggled out of bed.

I was one of more than a hundred people from many walks of life, from famed NASA scientist Dr. James Hansen to the son of generations of coal miners, from West Virginia’s Larry Gibson, who has spoken to the United Nations about the pillage of his mountains, to a multiply-pierced young anarchist woman from Chicago. We were there with thousands of of supporters on September 27 to participate in Appalachia Rising, the first mass nonviolent direct action in Washington, D.C. to oppose mountaintop removal.

I dislike arrest and jail, personally. Been there, done that, as long ago as the civil rights movement in the sixties. I dislike the loss of freedom, being put under the custody of someone with a gun. Most of what I dislike are the reminders of that seizure of my body and my destiny: the tight pressure of cold metal handcuffs on my skin, the awkward angles my body takes getting into police vehicles (I’m not as limber as I once was), the temperature in the cells (always, it seems, too hot or too cold), the uncertainty about whether I’ll be able to stay with my comrades or be isolated, the awful clang of metal against metal when the cell doors close. I’m lucky in that I’m rarely beaten and in those situations I have some protection from my white skin and my peaceful disposition.

But this mountaintop removal thing has to stop. And I have yet to meet the political scientist who can argue convincingly that Big Coal and the financiers behind it can be stopped without the countervailing pressure of people power through nonviolent direct action.

I know plenty of people who believe that the President “ought to” stop mountaintop removal (and the wars and poverty and the looting of our treasury by giant corporations) but their “Obama ought to” complaints imply, as complaints do, the powerlessness of the speaker.

The powerful way to handle an ally in the White House is to act in such a way as to “force him” to do what he wants to do already. The powerful way for a citizen to act in our country is to acknowledge the reality of its corrupted politics, as black students and Dr. King did years ago, and participate in campaigns that force change. That’s part of the legacy of power that moves Earth Quaker Action Team, the group I’m part of. Why hold back from taking nonviolent direct action?

I’m remembering the aboriginal woman who asked me a burning question during our break during a labor union training in Canada. Taking the stance of a warrior, fixing me with her brown eyes, she asked: “Why, George, have your people abandoned your president?”

I had no answer in the moment. It was a year ago, and indeed so many people had walked away after casting their vote, leaving Obama the job of cleaning up the mess. In reflecting on her question I realize that some people really do maintain the image of U.S. politics given by seventh grade civics textbooks, and keep their innocence despite everything they’ve experienced since. Others just want someone “on top” to blame: it used to be mom or dad or the teacher, and now it’s the president. Others cherish their comfort zone and continue to talk and sign petitions and lobby and talk some more, keeping themselves almost-convinced that spending their hours in meetings away from their families is the sacrifice that will bring social change. If only they let themselves consider a different paradigm.

Luckily, I was around when Dr. King reminded us that “the truth shall make us free.” The truth about how politics works in the U.S. The truth about climate change and the radical change it requires of us—of all of us. And the promise of freedom to re-join our planet, to have a decent future for our six-year-olds.

Yesterday’s action for me had a curious blend of power and sweetness. We walked into PNC’s ornate and historic bank near the White House. Reverend Billy set down on the middle of the marble floor a tarp and the rest of us poured dirt on it, creating a kind of mountain complete with twigs and leaves and a little red sign saying “Stop.” Eleven of us made an arc around the dirt mound, sitting as we did so, while behind us the gospel choir of the Church of Life After Shopping began to sing. A banner was held aloft: “PNC Bank: The Mountaintop Removal Bank.”

Supporters dialogued with the bank manager while photographers did their thing. Police checked us out and went away to deal with more pressing matters. Those of us sitting in—from Earth Quaker Action Team, Swarthmore College students, Rainforest Action Network—held a meditative silence while the choir sang and Reverend Billy preached and the bank locked its doors.

When it was clear that the authorities would “wait us out,” we alternated the singing with reflections and personal stories of meaningful experiences with nature, spontaneously as in Quaker Meeting. The closeness grew; communion happened.

The police returned and four of us were handcuffed and walked out of the bank to the waiting police cars and the cheers of our comrades.

This time the jail cells were cold. Our hearts, however, were warm.