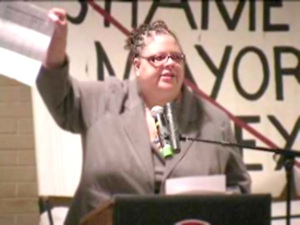 When I speak to parent groups about the neoliberal push to destroy public education and teacher unions, I am often asked how I can support these unions when they defend bad teachers. The question shows how far public discussion has been hijacked by conservatives, because teacher unions are essential to democratic schools.

They support the right of teachers to be presumed innocent and to have impartial hearings based on objective evidence of wrongdoing. For every horror story about an incompetent teacher, teacher unions can produce examples of teachers whose reputations, careers and lives would be ruined by what turned out to be false accusations, political discrimination or prejudice.

So union contracts and tenure provisions actually protect the uncensored exchange of ideas in classrooms. Free people need teachers who do not fear speaking truth and defending what they see as being best for kids.

Behind the Teacher Bashing
Education is one of the few sectors of the economy that is thoroughly unionized, and teacher unions are the best organized, most stable institutions blocking the neoliberal agenda to transform education. This is because union principles of solidarity and collective action counteract the selfishness and competitiveness that “free-market” ideologues say are essential for economic progress.

Strikingly similar exposés about how teacher unions protect malevolent, incompetent teachers are prominent in media outlets all over the world.

In the United States, far-right think tanks, like the American Enterprise Institute and the Manhattan Institute, finance lavish, well-orchestrated campaigns that stoke legitimate parent concerns about teacher quality in order to weaken teacher unions. The think tanks promote the assumption that charter schools, privatization and standardized testing will increase educational attainment and equalize opportunity by helping all students be competitive for well-paid jobs. What is chilling is that these far-right ideas have been adopted by the Obama administration and many mainstream Democrats.

Elsewhere in the world these same reforms, imposed by the World Bank as a condition for loans and aid, are justified quite differently. In its report, “Making Services Work for Poor People,” the World Bank lays out its rationale for a new economic order and a system of public education that serves it, all of which depends on weakening teacher unions:

1. Workers in every country must compete with those elsewhere for jobs, most of which require little education.

2. Public money spent on creating a highly educated workforce is therefore wasted because most people don’t need much schooling.

3. A professional teaching force is unnecessary and a waste of public spending. The only learning that counts can be measured in standardized tests.

4. Teacher unions are the primary barrier to governments carrying out this agenda of transforming education.

Stagnant Unions
Teachers in the United States are represented by two national unions, the National Education Association (NEA) and the American Federation of Teachers (AFT). Both need to be revitalized, democratized and pushed to be social movements that fight for justice and democracy in schools.

Many teachers who believed that “politics” were not their concern now see that their professional ideals and livelihoods are at risk. The economic collapse and resulting budget crisis, combined with the vicious attacks by politicians and media, have spurred them to ask why their unions are not more active in defending teachers and their schools.

CORE Beliefs
Perhaps the most important illustration of what can occur when teachers realize they need to “own” their union occurred this June with the Chicago Teachers Union.

The Caucus of Rank and File Educators (CORE ), a group that includes many experienced social justice activists, defeated the union’s old guard in a hard-fought election. Close to two-thirds of union members voted, giving CORE a resounding victory in the election runoff. As one caucus member explained, “CORE ’s win was the result of organizing. We energized the grassroots.”

CORE’s victory means the Chicago union has leaders who are committed to mobilizing teachers and working with parents to restore community school councils. They also want to overturn mayoral control, halt school closings, end standardized testing’s stranglehold on the curriculum and fight against merit pay linked to test scores.

CORE’s victory in Chicago follows the success of a reform coalition in the merged AFT/NEA local in the Los Angeles Unified School District. Detroit teachers have also elected a reform group. These victories indicate that neoliberal reforms can be a spark for successful organizing.

When I met CORE leaders in May, I was struck by the way they describe their work. Karen Lewis, the newly elected union president, told teachers that the group’s opposition to standardized testing resonated with teachers who feel “the joy has been taken from teaching.” Its activists refer to their students as “my kids” — a hallmark of teachers who care deeply about their students’ wellbeing. Many see their union work as the logical extension of their commitment to teach for and about social justice.

Race, class and social differences between teachers and parents can make alliances difficult to sustain. Communities of color have never been provided with quality schools. But CORE and community activists have worked hard at maintaining a respectful relationship, a process aided by the group’s multiracial membership and explicit commitment to ending inequality and racism in education.

Parent -Teacher Alliances
For New Yorkers familiar with the United Federation of Teachers (UFT), building a progressive teacher union may sound like an oxymoron.

This AFT affiliate, which represents 87,000 teachers, is skewered by the media as being too powerful. But for teachers seeking protection against capricious, educationally destructive and downright inhumane treatment at the hands of supervisors — at all levels of the school system — the UFT is little more than a dues-collecting machine. It is weak to the point of being nonexistent and oppressively bureaucratic in its own operations.

The UFT in its present state has neither the vocabulary nor the will to organize its members, parents and community activists to defend a system of public education that will provide New York’s kids with well-funded, well-run, socially and racially integrated schools. Its modus operandus is making backroom deals with New York’s notoriously corrupt politicians. But in the process of winning small economic gains, the UFT ignores the need to address issues like testing, which significantly affect teachers’ working conditions, such as seniority and students’ learning ability.

Despite the shortcomings of locals like the UFT, it’s important to understand how teacher unions can be potential allies for parent and community activists. They have stability, institutional roots and political clout. But union leadership is not synonymous with union members. The strongest alliances start at the grassroots level, with common struggle over issues that are meaningful for all of a school’s constituencies.

Lois Weiner is the co-editor with Mary Compton of The Global Assault on Teaching, Teachers, and Their Unions. She taught high school in the New York City schools for nine years and is now a professor of education at New Jersey City University. She can be contacted at lweiner@njcu.edu.