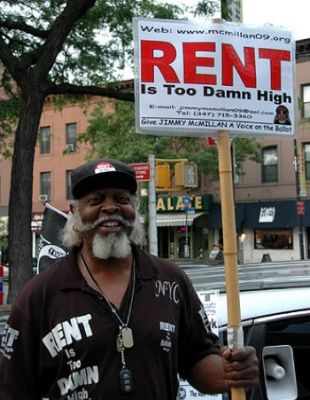 Your choice in this year’s gubernatorial election is between two main candidates: Democrat Andrew Cuomo, who promises to freeze state workers’ pay and “reform” (cut) their pensions, rules out raising taxes on New York’s 63 billionaires and has one paragraph about housing costs in his 250-page platform. Or Republican Carl Paladino, a bigoted billionaire who made a fortune renting real estate to state agencies, but now wants to “take a baseball bat to Albany,” slash Medicaid and put the unemployed in re-education camps to teach them personal hygiene.

There are other alternatives in the race. The left-environmentalist Green Party is running Howie Hawkins, a Syracuse environmental and union activist. Brooklyn City Councilmember Charles Barron (D-East New York), noting that the Democrats’ statewide slate is exclusively white, has organized the Freedom Party. Housing activist gadfly Jimmy McMillan has the Rent Is Too Damn High line. Kristin M. Davis, the former madam whose escort service brought down former Gov. Eliot Spitzer, is the candidate of the Anti-Prohibition Party, which is running long-time anti-prohibition activist Randy Credico against Charles Schumer (D-NY) for the Senate. (Credico is also on the Libertarian line.)

Hawkins is campaigning on a platform of a “Green New Deal.” According to campaign manager Mark Dunlea, if the state taxed the rich — stopped rebating the $16 billion in annual stock-transfer taxes to Wall Street, levied a 50 percent tax on bankers’ bonuses, and returned tax rates to what they were in the 1970s —95 percent of New Yorkers would get a tax cut, and New York would go from a $8 billion deficit to a $26 billion surplus. That money could then be used for a “WPA-style jobs program” that would expand mass transit, convert heat and electric utilities to alternative energy, and retrofit and weatherize buildings. The Greens also advocate single-payer healthcare, a ban on “hydrofracking” for natural gas and the legalization of marijuana.

Barron says the overriding issue is economic justice. “The bottom line is power,” he says. “We cannot allow them to balance the budget on the backs of working-class people. We have to have leverage to tax the rich.” The party also supports free tuition at city and state universities, lowering or eliminating the subway fare and single-payer healthcare, rather than the “bogus” Obama plan. 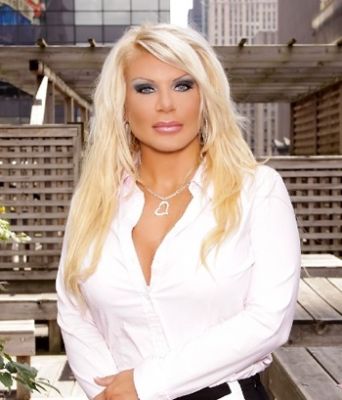 Davis, as might be expected from her party’s name and her previous occupation, is advocating the legalization of marijuana, prostitution and gay marriage. Although she is a libertarian, “generally opposed to government intrusion in the marketplace,” she says that in New York, “without rent control and rent stabilization, the cost of housing would shoot out of sight.”

If any of these candidates wins 50,000 votes, their party will get a guaranteed line on the ballot for the next four years. If they don’t, the party will have to collect at least 15,000 signatures every time it wants to run a candidate for a statewide office, and New York’s election laws are quite picky — and the major parties’ lawyers often quite vindictive — about what constitutes a valid signature. The Greens won a ballot line in 1998, but failed to get the votes needed to keep it in 2002 and 2006.

So are the Greens and the Freedom Party competing for the same 50,000 votes? “There is definitely some overlap,” says Dunlea. “We hope we both get a ballot line.”

Barron says he supports the Greens on environmental issues, but says they are “not addressing life-and-death issues in the black and Latino communities. We are the only party that’s been there.” He also emphasizes that he is the only third-party candidate in the race who is a sitting elected official.

Dunlea says the Greens had discussions with Barron in 1998 about creating a joint third party, but that Barron wanted to retain the option of working within the Democrats. Greens have merged with similar black-led parties in Boston and Washington, D.C., he adds.

FUSION VOTING
New York law is distinctive in that it allows third parties to endorse other parties’ candidates. This has given the state a history of third parties that either ran their own candidates or used their “cross-endorsements” to pull the Democrats or the Republicans to the left or the right. In the 1930s and 1940s, the leftist American Labor Party (ALP) helped elect progressive Republican Fiorello LaGuardia mayor over a machine Democrat. Representative Vito Marcantonio, a socialist who represented East Harlem in Congress for 14 years, was an ALP member. 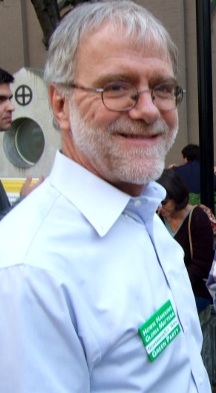 The Liberal Party was established in 1944 as an anti-Communist alternative to the ALP. Its high point came in 1969, when it endorsed liberal Republican John Lindsay for mayor after he lost the GOP primary. With the Republican and Democrat both running on law-and-order platforms and splitting the white-backlash vote, Lindsay squeaked to re-election. But by the 1990s, the Liberals had degenerated into a corrupt patronage machine, endorsing Rudy Giuliani in exchange for jobs for the party chief’s sons. They lost their ballot line in 2002.

On the right, the Conservative Party emerged in the early ’60s. It won a U.S. Senate seat in 1970, when James Buckley beat out a Democrat and a Republican who opposed the war in Vietnam. This year, after some machinations, it’s supporting Paladino.

Currently, the most successful practitioner of cross-endorsement is the Working Families Party (WFP), which is primarily backed by the state’s labor unions. It rarely runs independent candidates; it is endorsing Cuomo, arguing that people should vote for him on its line in order to preserve progressive leverage over him.

The Independence Party, the state’s top third party, has a checkered history. Founded in 1991 as the New York vehicle for Ross Perot’s presidential campaign, it was also the vehicle for Rochester billionaire B. Thomas Golisano’s political ambitions. For almost a decade, it was dominated by the New Alliance Party (NAP), a Jew-hating psychotherapy cult posing as a leftist, pro-black group. During that period, it endorsed Michael Bloomberg for mayor and got several hundred thousand dollars from his campaign, and NAP leaders also received several million dollars in state contracts.

Real-estate interests are now trying to finance the Independence Party as a counterweight to the WFP. It has endorsed Cuomo for governor, and it is supporting a mix of Democrats and Republicans for Congress.