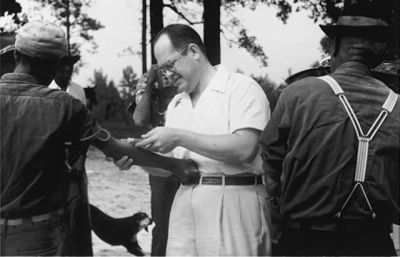 Early in America’s crusade to spread the wonders of modern medicine, a group of researchers in Guatemala did something unspeakable in the name of science. Documentation of the project is just now coming to light, more than 60 years later, and it reads like a horror novel: Hundreds of men systematically infected with syphilis and other sexually transmitted diseases in an effort, endorsed by both the U.S. and Guatemalan governments, to research the effectiveness of drug treatment.

Researchers exposed men to disease with varying degrees of intent. At first, Guatemalan health official Juan Funes selected prisoners in Guatemala City as subjects because prostitution at the penitentiary would likely yield fresh infections. But the researchers used more invasive tactics as well. The Washington Post reports, “in other cases, doctors put infectious material on the cervixes of uninfected prostitutes before they had sex with prisoners.” When they needed more infections, they took more aggressive measures—“direct inoculations made from syphilis bacteria poured into the men’s penises and on forearms and faces that were slightly abraded … or in a few cases through spinal punctures,” according to the research of the historian who broke the story, Susan M. Reverby (interviewed recently on Democracy Now!).

Many, but not all, of these people—who included prisoners, soldiers and mental patients—were given penicillin to test its effectiveness as an after-sex treatment of syphilis, a disease that that can result in blindness or death. Medical personnel carried out similar studies on gonorrhea, which can lead to intense pain and infertility, and chancroid, which causes genital ulcers.

The archival documents suggest the experiments didn’t raise significant ethical qualms in Washington. The surgeon general at the time was quoted as saying, “You know, we couldn’t do such an experiment in this country.”

Well, in a way, they could. A bizarre element in the story is the connection to another shameful chapter in the history of American medicine. The man behind the infection of incarcerated Guatemalans, Dr. John Cutler, had a hand in the infamous Tuskegee experiments as well.

That study (also conducted in the name of public health, of course) involved recruiting syphilitic black men into a 40-year program that denied them treatment without their knowledge. The U.S. Public Health Service worked in partnership with the Tuskegee Institute to rope hundreds of men into serving as an unwitting control group. Many were never told about their condition and received either insufficient treatment or none at all. Although the Public Health Service was administering penicillin for syphilis by 1943, the Tuskegee “subjects” received none to continue the controlled study. Modern day informed consent guidelines stem from the bioethical scandal that laid bare the cruel entanglement of racism and science.

The Guatemalan research is further proof that medical abuses against people of color wasn’t limited to Tuskegee. In Puerto Rico, for example, starting in the 1950s poor women served as “guinea pigs” for trials of high-dosage birth control pills, which were later embroiled in an ethical scandal over their potentially dangerous side effects. Exploiting Puerto Rican women’s wombs was seen as a convenient alternative to dealing with all the political and ethical hurdles that would have surrounded studies of the pill on the mainland.

Experimentation on marginalized groups, at home and abroad, is something of a tradition in American medicine. A Counterpunch article documents over a century of cases of the government deliberately sickening unwitting subjects, stretching from military detainees in the Philippines exposed to the plague to incarcerated men in Chicago infected with malaria.

Many of the researchers involved with these experiments may have genuinely believed they were serving a higher purpose. They might have thought the ends justified the means, that the lives of these Guatemalan inmates or poor black men were somehow being redeemed through their participation in the trials, albeit unwittingly. But both Tuskegee and Guatemala City reflect a deep, even subconscious belief among medical practitioners in the inferiority of the other.

The subjects, meanwhile, are tied together by their utter powerlessness under the coercion of medical authorities—poor, often imprisoned by the state, and lacking the knowledge they need to control their own bodies fully. One of the cruelest outcomes of these experiments is that they’ve irrevocably damaged public trust in medical science, which has undermined the exploited communities’ health on an even broader level. Some advocates attribute the black AIDS crisis in part to a broad alienation of the community from the health care system.

“We are concerned about the way in which this horrendous experiment, even though it was 60 years ago, may appear to people hearing about it today as indicative of research studies that are not conducted in an ethical fashion,” National Institutes of Health Director Francis S. Collins told the Post after the Guatemala story broke.

Collins is referring to yet another high-stakes consequence: Globally, the impacts of today’s most damaging diseases fall heaviest in poor communities of color, and any new treatment rightly demands clinical trials in those contexts. Scientists continue to struggle to earn enough trust to fill those trials, and the Guatemala history is one big reminder of why that’s so. For clinical trials currently operating in the Global South, the scandals of past experiments will hopefully serve as a lesson in ethics for the future.