The global capitalist crisis that started in 2007 has been neither short nor shallow. The real unemployment rate, the “U6” rate, has zoomed from 8 to more than 16 percent and remained there since May 2009. Home foreclosures have also soared and some eight million households are currently behind on their mortgage or in foreclosure, according to the Wall Street Journal. Benefits are being cut, real median household income is declining and jobs are increasingly insecure. And analysts are adopting the term “precariat” to describe the growing class of insecure workers.

Making matters worse, governments in many advanced capitalist countries have poured massive sums of money, chiefly into banks and other large corporations, to try to restart their moribund economies. Because governments dared not tax corporations and the rich to get those massive sums, they instead borrowed the money, mostly from those same two groups, by selling them bonds, bills and notes. 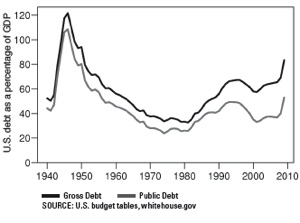 Governments borrowed and spent trillions to rescue and stimulate major banks and other corporations facing collapse. They purchased private banks’ bad loans, increased the money supply and lent it to banks at government-depressed interest rates, invested huge sums in banks and other corporations and finally bought non-financial corporations’ products. The lenders to those governments included many rescued corporations. Major banks used bailouts not to lend to consumers and businesses — too risky, they said, in this depression — but instead to governments, especially the United States.

Lenders now demand austerity programs that effectively shift the costs of the crisis and of governments’ responses from the corporations and the wealthy to everyone else. Austerity means laying off government employees and cutting public services, thereby freeing up money to pay the interest and principal what the governments borrowed.

By mid-2007, corporations, governments and individuals were finding it difficult to borrow funds. Prior to this, banks made many bad, uncollectible loans because they failed to properly assess risks. Many enterprises and individuals could no longer repay loans because their businesses, wages and salaries were not growing fast enough. As private borrowers defaulted, banks’ profits and their capital shrank. Rising default risks led banks to cut private lending, further undermining their profits.

CAPITALIST FREEZE
In the fall of 2008 the capitalist system ground toward a halt as the credit system froze. Desperate to unfreeze credit, governments guaranteed bank solvency and many private debts, invested massively in and lent to private banks, and became the ultimate borrower of a huge portion of loanable funds. Banks everywhere lent to governments because it had become unsafe to lend to almost anyone else.

In this peculiar “nationalization” of debt, government temporarily functioned as both lender and borrower of last resort. Government thawed the credit system sufficiently to stop global capitalism from collapsing while hoping a massive stimulus would overcome the crisis. Back then, few policymakers or observers worried about the consequences of mushrooming government debts.

The government rescue of the U.S. financial industry sufficiently reduced interest rates and pumped enough money into the economy to give banks, large corporations and the stock market a heavily hyped “recovery” from the economic disaster of 2008. Their recovery started in March 2009, lasted a year and has now stalled. The U.S. corporate sector, like its European counterparts, now fears a relapse into renewed economic decline, the so-called “double-dip recession.”

The bank and stock market recoveries never reached most of the rest of the economy. Stimulus programs tried to broaden the recovery beyond financial institutions and make it last for more than a year. Neither effort succeeded. Yet the stimulus was paid for by trillions borrowed from lenders who now demand austerity programs. The implied threat is if austerity is not imposed then governments will face higher interest rates on new and renewed loans or will be denied loans, crippling governments’ usual operations.

Most political leaders fear that the banks’ threats, if carried out under their watch, would end their careers. This was precisely the situation faced by Greece, Ireland, Portugal, Hungary and other European countries as the crisis unfolded.

Austerity policies reveal a political conflict always simmering inside capitalism: who will pay increased taxes and who will suffer decreased government spending? Millions of workers in Greece, France and elsewhere in Europe have organized general strikes under the slogan, “We have paid for their profits; we will not pay for their crisis.” Millions more mobilized by trade unions and their political allies participated in a Europe-wide day of protest on Sept. 29.

They are challenging the efforts by Europe’s capitalists and politicians to pass austerity programs cutting public payrolls and services. In the United States, the continuing crisis and state and local austerity embitter millions who have yet to replicate Europe’s mass mobilizations. Many Americans blame Obama and the government, seek scapegoats such as immigrants, and threaten to vote for Republicans, who favor austerity even more than Democrats.

It is not uncommon to read or hear comments such as the following: An Athens trucker says, “Public employees here don’t work hard enough, so it is reasonable to cut their pay.” A Parisian clerk thinks it “reasonable to postpone the official retirement age a few years; we all live longer now.” A Minneapolis secretary agrees that it is “reasonable, in crisis times, to get by with fewer public services.” A New York lab technician supports a new tax on cell phones as “probably reasonable; after all, people overuse them.”

Yet, if austerity is to be imposed, there are other, far more “reasonable” options to consider.

A different kind of austerity — collecting income taxes from U.S.-based multinational corporations and wealthy individuals — could generate vast revenues. For example, the United States currently levies no property tax on the trillions of dollars of intangible property such as stocks and bonds. If Washington levied a small tax on anyone’s intangible property over, say, $1,000,000, it would raise huge new revenues, reduce deficits and weaken the rationale for austerity; so would ending tax exemptions for multi-billion-dollar private universities such as Harvard, Yale and Stanford. Exiting the Iraq and Afghanistan disasters could divert money to overcome crisis without mass austerity. Such alternatives are being struggled over in other countries.

Capitalism first generated this global crisis and now proposes mass austerity to “overcome” it. We should learn from capitalism’s repeated failures and be publicly debating whether America and the world might be better served by transitioning to a new, non-capitalist system. Having learned hard lessons from the first socialist attempts during the last century in Russia, China and beyond, we need to rise to the challenge to make a new attempt that avoids their failures and builds on their strengths. When better than now?

Rick Wolff teaches in the graduate program in International Affairs of The New School in New York. His work is available at rdwolff.com.