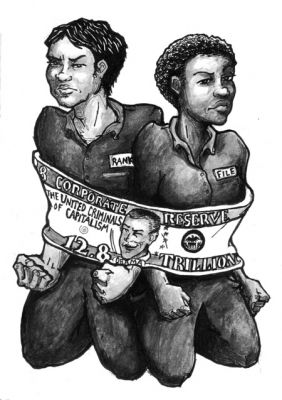 The deepening economic crisis is confronting us with the harsh realities of the undemocratic capitalist system we labor under. Those most responsible for this crisis, such as the Wall Street banks, have been bailed out while corporate America is posting record profits once again. However, corporations are not hiring and the banks are not lending. As a result, the real unemployment rate is above 16 percent and the official poverty rate of 14.3 percent is the highest since 1994.

To add insult to injury, after watching trillions of dollars in public money being handed over to banks around the world, people are told that their governments must adopt austerity policies that sacrifice people’s lives in the name of reducing the deficit. In the United States, the mainstream consensus ignores the millions of Americans who have lost their jobs and homes and who find themselves destitute as meager unemployment benefits run dry. On the state level, battling the deficit means massive layoffs and budget cuts that decimate healthcare, education and other social services that are more urgent than ever.

As a student of society and an active member of the union representing the faculty and professional staff at the City University of New York, I wonder: Where is the labor movement in all this? The relative quiescence of U.S. workers, when compared to other parts of the world, both helps to explain the current state of affairs and bodes ill as to the likelihood of reversing it.

REVERSING THE DECLINE
Yet reverse it we must. What it will take, however, is a serious rethinking of the American labor movement’s ineffectual long-term strategies, as well as the kind of direct action we saw in the case of the Republic Workers in Chicago, the Stella D’oro workers in the Bronx and, most recently, the Mott’s workers in upstate New York.

Prospects for a reversal seem dim. Labor has been in decline since the 1950s, following the gains won in bitter struggles by ordinary Americans and the working class during the Great Depression and the mid- 20th century. These struggles resulted in the postwar social contract between labor and capital and a rudimentary welfare state. In these struggles, which included general strikes as well as tactical innovations such as industrial sit-ins, it was usually the rank and file that took the initiative, shaking up the capitalist class. Labor unions were recognized but they also assumed the function of containing the subversive and disruptive potential of grassroots militancy.

The current crisis has parallels with the run-up to the Great Depression: the exacerbation of economic inequality, the growth of debt and the proliferation of asset bubbles. At the same time, the level of workerindebtedness is much higher today than in the 1930s. This may be one reason why most Americans have been quiet despite the suffering being inflicted upon them. In addition, the collapse of Soviet Communism has increased doubts that a radical alternative to capitalism is possible while reducing the willingness of the capitalist class to make any concessions to workers.

Many workers are also wary of engaging in militant action because the difficulty of finding another job amid an economic crisis makes strikes and other forms of resistance riskier. As such, labor unions are tempted to act defensively, salvaging whatever gains they can and waiting for an economic recovery that they hope will strengthen their hand in their negotiations with employers. As the New York State AFL-CIO’s recent endorsement of Andrew Cuomo demonstrates, this way of thinking prompts labor leaders to endorse even openly anti-labor politicians running on a platform of austerity and freezing public sector wages.

WHY ECONOMIC RIGHTS?
Rather than continuing with its failed defensive posture, the labor movement has an opportunity to catalyze a new political and economic project that challenges the undemocratic nature of capitalism. The principle animating such a project has to be economic democracy, meaning the right of all human beings to have an equal say over the economic decisions that affect their lives as well as the goals, priorities and nature of the economic system of which they are a part. Economic democracy could bring about social, economic and political changes to empower working people and dramatically improve their chances for a secure and more fulfilling life. It could also tap into much of the popular anger against the bailouts of the financial sector, an anger currently being harnessed by the Tea Party and the political right.

Economic democracy could facilitate alliances between labor and other progressive movements. An equal say over the economic decisions that affect people’s lives presupposes more than an end to class inequality. It also requires an end to any inequality, such as those based on race, gender, sexual orientation and immigrant status, which give some groups more political, social and economic rights than others. Economic democracy is also a necessary condition of ecological sustainability in a world where corporate capital in the global North is able to shift the environmental cost of its activity onto the rest of humanity.

Economic democracy inspires many movements today: recovered factories run democratically by workers in Argentina; participatory budgeting in cities around the world, which increases the say that ordinary citizens and disenfranchised groups have in public spending and investment; and the plan by the American Steelworkers Union and the Mondragon cooperatives in Spain to establish manufacturing cooperatives in the United States and Canada.

The current crisis has created an opening for a radical critique of the capitalist system and, with it, an opportunity for the labor movement. Right now, labor’s defensive posture plays into the hands of those who paint unions as greedy organizations that make U.S. corporations uncompetitive and saddle the majority of Americans not working in the public sector with higher taxes and public debt. But if the labor movement seized the moment, it could very well reverse its long-term decline and catalyze a movement that would prevent another economic disaster down the road.

Costas Panayotakis teaches Sociology at New York City College of Technology. His article on economic democracy and the left will be published in the December 2010 issue of Capitalism Nature Socialism (cnsjournal.org).