This article was originally published on Truthout.org.

In August, Truthout conducted soil and water sampling in Pass Christian Harbor, Mississippi; on Grand Isle, Louisiana; and around barrier islands off the coast of Louisiana, in order to test for the presence of oil from BP’s Macondo Well.

Laboratory test results from the samples taken in these areas show extremely high concentrations of oil in both the soil and water.

These results contradict consistent claims made by the federal government and BP since early August that much of the Gulf of Mexico is now free of oil and safe for fishing and recreational use.

The samples taken were tested in a private laboratory via gas chromatography.

The environmental analyst who worked with this writer did so on condition of anonymity and performed a micro extraction that tests for total petroleum hydrocarbons (TPH). The lower reporting limit the analyst is able to detect from a solid sample is 50 parts per million (ppm). 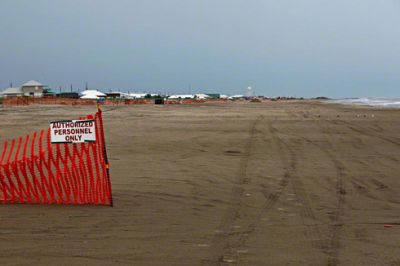 A water sample from inside Pass Christian Harbor, Mississippi, taken on August 13, contained 611 ppm of TPH. Seawater that is free of oil would test at zero ppm of TPH.

A soil sample containing tar balls from the beach on Grand Isle, Louisiana, taken on August 16, contained 39,364 ppm of TPH.

Several soil samples were tested from an oil-covered beach on the island. 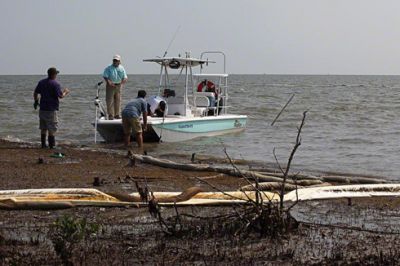 A sample of soil taken from this area contained 40,099 ppm of TPH. Much of the marsh grass was stained black and brown with oil.

A sample of marsh grass in this area of Casse-Tete Isle contained 144,700 ppm of TPH.

A water sample taken from a tide pool on West Timbalier Isle on August 16 contained 11 ppm of TPH. The GPS coordinates for this and the following samples are 2903.389N, 927.033W.

Disturbingly, despite these results and a continuance of fish kills along the Louisiana coast, the National Oceanic and Atmospheric Administration has recently partnered up with BP to send personnel into middle schools in Louisiana in order to convince school children that Gulf seafood is safe.

A water sample taken from an inland lagoon on West Timbalier Isle contained 521 ppm of TPH. 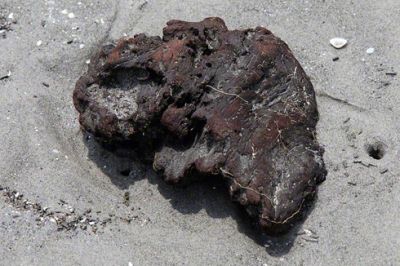 Sampling was also conducted on beach areas of West Timbalier Isle on the same day.

A soil sample taken near a layer of tar on the beach of West Timbalier Isle contained 60,068 ppm of TPH.

A soil sample taken from another inland lagoon on West Timbalier Isle contained 4,506 ppm of TPH.

Open Water in Gulf of Mexico

After leaving the area, Truthout came across a large area out in the Gulf of Mexico, approximately five miles from shore, where emulsified white foam covered the surface.

Fishermen and other journalists across the Gulf have reported to Truthout that this phenomenon is what is left after dispersants have been used to sink surface oil. 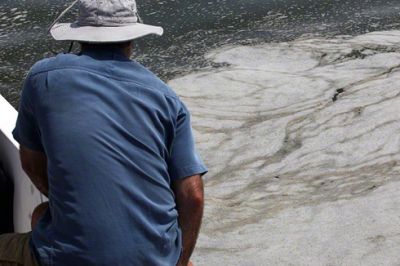 A water sample from surface of this area contained 11ppm of TPH. It was taken from an open water area between Timbalier Isle and Port Fourchon at 3:00 PM, on August 16 and the GPS coordinates for the sample are 2902.871N, 9017.421W.

The US Coast Guard claims that no dispersants have been used since mid-July.

Jonathan Henderson, with the nonprofit environmental group Gulf Restoration Network, was on board to witness the sampling, as well as to conduct his own sampling and document what he found.

The hydrocarbon tests conducted on the samples taken by this writer only represent a tiny part of the Gulf compared to the massive area that has been affected by BP’s oil catastrophe. A comprehensive sampling regime across the Gulf, taken regularly over the years ahead, is clearly required in order to implement appropriate cleanup responses and take public safety precautions.