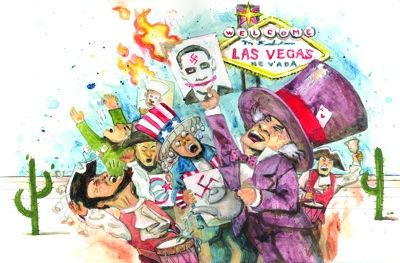 LAS VEGAS — I recently received a slick email showing South Asian immigrants at a parade praying on Madison Avenue. It came with the breathless statement that Muslims have taken over America for Allah, making the false claim that every Friday in Manhattan, worshipers flow out of packed mosques in two different locations and pray in the streets.

Outright misinformation like this is rife in the Tea Party movement, and builds off misinformation found on stalwart rightist websites like Townhall.com and WorldNetDaily.com and promoted by FOX news personality Glenn Beck. Sometimes, like this email, it seems to be produced by dedicated freelance troublemakers — popular propagandists.

In late July, I encountered a year-old piece of misinformation from a local couple who were rushing to attend the Americans for Prosperity campaign rally against Nevada Sen. Harry Reid and other Democrats. Owners of a pottery studio, Bob and Dot Donaghy moved to Nevada 15 years ago during boom times and now were concerned that “Nevada is in trouble. We’re 50th in education, first in unemployment and foreclosures, 15th in getting money from the government.”

This last statistic is from the Washington, D.C.-based Tax Foundation, and I heard it from Tea Partiers all over the state. It’s used to undercut Reid, who says he is bringing home the bacon — in this case, federal tax dollars to benefit Nevada. But it’s a distorted snapshot that validates anti-federal government, anti-tax activists in their belief that they are being ripped off. The reality is that Nevada, to remain the lowest-taxed state in the union, doesn’t sign up for the options offered by Medicaid and other federal programs that would bring in more money to the state coffers but require matching funds.

Bob Donaghy went on to say, “We’re not socialist-type people and [Reid] is. It’s really about fiscal responsibility, protecting our constitutional rights. The government needs to pay as we go, not put our children in debt. The Republicans, like the Democrats, have reached the point where they are entrenched politicians. Once they start receiving money over the years from lobbyists, they are no longer thinking about what’s best for the United States.”

A lot of people would agree with him. But then he started talking about Detroit, and the misinformation came into play. “You know Reid and Obama took over the auto industry — Chrysler and General Motors. If a dealership donated to the Democratic Party, they kept it. If a dealer donated to the Republican Party, they closed it. It’s backed up by multiple sources.”

And he’s right — about the sources that is. Right-wing bloggers led by Doug Ross pushed this idea in May 2009, and Phyllis Schlafly picked up on it in her Townhall column. It was quickly debunked, even by the conservative Heritage Foundation. But the story won’t die because it encapsulates all the Tea Party fears of a socialist government that runs roughshod over small-businesspeople like car dealers and the Tea Party activist himself. They think government is destroying the U.S. economy with its big spending and favoritism.

It felt like everyone I interviewed in Nevada’s bubbling conservative scene was a small-businessperson or a retiree who had sold his or her business and is now clinging to the lifeboat so they won’t be tipped by the waves of the economic crisis and the grasping needs of government.

Women said they were fighting for their children’s future by leading the charge against deficits. One person called Medicare and Social Security “a Ponzi scheme” that will collapse without even being dismantled. Many dismissed as “socialist” or class warfare the Keynesian idea that government must invest in the economy and jobs when the private sector is stuck. Embracing trickle-down economics like a life jacket, they saw cutting taxes as the only way to soothe the churning waters. And those who disagreed with them were un-American or, for some, dangerous internal enemies who are destroying America.

I heard a Tea Party myth riffing on this theme from an educated professional’s wife. She had a variation of the “Obama is an imposter” line. He’s not a Muslim, he is a Communist. Her proof was a story popularized by Glenn Beck that the Kansas-bred Anglo grandparents who helped raise Obama “belonged to the communist view” because they attended a “little red church” during the 1950s. That’s a Unitarian church near Seattle that Obama’s grandparents and mother briefly attended before moving to Hawaii. The current pastor says the church was tarred because of the “effects of McCarthyism.” Based on little more than that, Beck has called Obama’s grandparents and mother Communists and un-American.

The auto bailouts and healthcare reform are bringing old anti-Communist politics to life as people reach back for a framework that fits their outrage. When Delaware’s Christine O’Donnell calls Obama “anti-American,” as she did on Fox News after winning the primary, this is where she is coming from.

Lynn Harsh, of the conservative State Policy Network, told participants at an Americans for Prosperity conference in Las Vegas that when they blog, they have to be more careful to verify their sources. “If you are going to create change, it’s got to seem credible and safe,” she said. “And we need to do better there. We need to be a lot smarter.”

But she was speaking at a conference funded by the Koch brothers’ oil fortune where climate-change deniers headlined a workshop. Does Lynn Harsh agree with Americans for Prosperity that scientists are manufacturing data about human-generated climate change? Or does she keep mum about her disagreement to keep the climate-denying funders of the conference happy, a trade-off conservatives have made throughout their movement, laying the groundwork for Tea Party myth-making?

In the 2008 presidential race, top conservatives backing John McCain slammed Obama as a socialist and insinuated he was un-American. It was nothing Sean Hannity and Rush Limbaugh weren’t saying. But by legitimizing the revival of McCarthy-style politics, some establishment Republicans are now finding the rhetoric being turned against them. In Nevada, a coalition of Tea Partiers and Ron Paul supporters took over the Las Vegas-area Clark County Republican Party (CCRP) and the state party structures in a swirl of conspiratorial denunciation against the conservative GOP establishment.

“Most of us who left are indeed fiscal conservatives and ardent supporters of constitutional rights, so the ‘Marxist’ accusation is a reflection of the deep paranoia and delusion within the current CCRP leadership,” said the (very conservative) former CCRP chairman after he stepped down.

One unrepentant Tea Partier replied, “If we have to purge the RINOs (Republicans in Name Only) from power before we purge the fascists in power, so be it.” He is, in the words of historian Richard Hofstadter, “in a spiritual wrestling match with minions of absolute evil.”

Back in the 1950s, old-style conservatives in the Republican Party felt shut out by the moderates who accepted the New Deal reforms regulating capitalism and providing modest aid for people tossed aside by economic downturns. That the New Deal asserted federal power over the states could mean only a loss of political sovereignty and American liberty. Feeling disenfranchised not just by Washington but parts of their own party, the Republican right nurtured the McCarthy-bred universe of betrayal, suspicion and conspiracy in an effort to win back power. They failed, until the 1960s and the debacle of Barry Goldwater’s presidential campaign.

Many of today’s Tea Partiers inhabit a similar universe but start out with the backing of important party insiders like Indiana Rep. Mike Pence and South Carolina Sen. Jim DeMint, and money-soaked political operatives like the anti-tax Club for Growth and Sal Russo, a former Reagan strategist who leads the Tea Party Express Political Action Committee. Like their McCarthy-era counterparts, the free-marketers ally with conspiracy- and hate-mongering to win back power. Unlike the days of McCarthy, they have a mainstream television news network and internet sites on their side. It is a dirty business. And other than shunning them — and articulating a clear, simple vision of our own — we are no savvier about how to stop the fever than our predecessors were in the ’50s.

Abby Scher is a sociologist and journalist who writes about the U.S. right and economic justice. A version of this article originally appeared on Truthout.